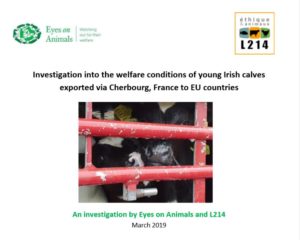 Irish dairy calves are subjected to horrific abuse during their journey to veal facilities in Europe. This is the conclusion of a joint investigation undertaken by Eyes on Animals and French organisation L214.

The investigation took place between 14-17 March 2019 and involved trailing 23 Irish livestock trucks and inspecting the conditions the animals were exposed to.

Besides the abuse, also the drinking facilities onboard the Irish trucks were not working or inappropriate for the calves to use. As a result, many calves were unable to drink water during the long journey, including the 18 hour sea journey on Stena line ferries from Rosslare to Cherbourg (FR).

Calves arrived exhausted, thirsty and hungry at the French control posts. Handling was impatient, particularly at Qualivia in Tollevast where the NGOs recorded 2-4 week old calves, so young they can barely walk, being beaten, kicked, punched, jumped on, pulled by their ears and denied adequate food and rest. Control posts are supposed to be places where under EC regulations the animals are cared for and given proper rest and feed before onward transport to veal pens in the Netherlands. The abuse was so severe, calves were collapsing in pain, dragging their hind legs along the floor unable to get back up, whilst one employee threw a calf to the concrete floor and jumped on his fragile body with full force whilst the other employees watched. 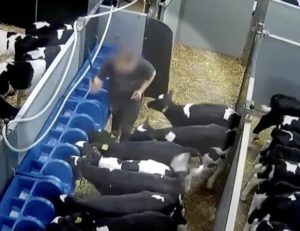 Ireland exports over 100,000 unweaned dairy calves annually to the EU, with Northern Ireland contributing approximately 20,000 calves, thus making Ireland one of the biggest exporters of unweaned calves in Europe. The majority of these calves are exported to the Netherlands, the largest veal producer in Europe who on average import 50,000 calves from Ireland alone.
Nicola Glen, UK & IE spokesperson for Eyes on Animals: “’It is heartbreaking to see how these vulnerable animals, still unstable on their legs and dependent on their mothers milk, undergo horrific violence during transport to the Dutch veal facilities. The Netherlands is the driving force behind these transports and Ireland is the main supplier. Both countries should be taking responsibility for the welfare of these calves.”

Lesley Moffat, director of Eyes on Animals: “To put a final end to this vicious circle of the dairy industry producing so many calves that they do not want, we have to re-think the whole dairy industry. Either we stop consuming dairy, or the dairy industry incorporates the production of calf meat on the dairy farm by keeping all calves in the herd, with their mothers, and raising them together. The are more and more dairy farmers in the UK and also the Netherlands now doing this, and they have our support”.

L214 and Eyes on Animals have since filed joint complaints against both the French control post Qualivia in Tollevast and against a control post employee for the violent treatment towards the calves. The relevant authorities in the Netherlands, France and Ireland have been informed of the documented violations by the two organizations, who are demanding that serious action be taken. Additionally, both parties are running a petition against the transport of unweaned animals, which will be sent to the European Commission.

For the link to the EN website about this campaign including a short video: https://www.L214.com/unweaned-calves

For the link directly to the petition : https://www.l214.com/unweaned-calves#petition

On the 14-16th March 2019, four teams from Eyes On Animals and L214 investigated the well-being of young Irish calves being transported over sea from Rosslare (IE) to Cherbourg (FR) on to their final destinations by road. They checked the welfare conditions at the control posts, during transport and upon arrival at the farm. Two trucks were trailed to their final destination, a farm in Holland. Another truck  was trailed to a control post in Abbeville (FR) where it continued to Spain, unattended by an NGO team. They documented the following serious violations.

• Brutal handling of calves (kicking, hitting, dragging by the ears, throwing and jumping on them) at control post Qualivia in Tollevast.

• Calves transported over the maximum journey time of 19 hours. • Calves not being rested and fed on time

• Drivers going over the maximum allowed driving hours, risking the welfare of the animals, himself and other users of the road.

A selection of the heavy media coverage on the live exports  investigations abuse:     http://pic.twitter.com/S51nb6Z5eG