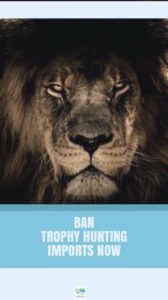 Zac Goldsmith MP will lead a Westminster Hall debate on trophy hunting on Wednesday 15 May.

We believe Trophy hunting is unacceptable and press for it to be banned. We also call for a UK ban on hunting trophies.

Reasons why we urge for an end to trophy hunting and call for a  UK ban on lion trophy imports kindly provided by our friends at LionAid http://www.lionaid.org

1. Trophy hunting has not been shown to benefit the conservation of African wildlife. Indeed, previously assigned trophy hunting concessions in at least Zambia and Tanzania have been hunted out and are no longer viable Over 70% in Tanzania and 80% in Zambia.

2. Trophy hunting, while suggested as “sustainable conservation” by vested interest groups has not benefited wildlife, income to national communities, or income to African national wildlife agencies to improve protection of national parks.

3. Trophy hunting operators say they assist local communities by sharing their profits. The reality is that not a single trophy hunting operator shares more than 3 cents per annum in profits with each local community member, and do not staff clinics and schools as they claim. This has been shown again and again in a number of official reports (the IUCN and the UN for example) but such facts have been ignored by our government.

4. The UK government should impose much more stringent requirements on imports of trophy products. These should at least require clear evidence that the imported lion trophy has benefited the conservation of the species AND that profits from the hunting of which have clearly been shown to benefit local communities living with wildlife and the maintenance of protected areas.

6. LionAid have already organised two Adjournment Debates asking the UK to ban lion trophy imports, the first brought by Andrew Turner in November 2010 (received by Richard Benyon) and the second brought by David Jones in November 2015 (received by Rory Stewart).
Neither Debate resulted in the UK bringing in a ban on lion trophy imports, despite Rory Stewart promising David Jones at the second Debate that if significant improvements hadn’t occurred in hunting practices within two years, he would initiate a ban. This did not happen despite NO improvements in hunting practices and despite the same caveats about hunting improvements required being expressed by the Tanzania Department of Wildlife in 1995.