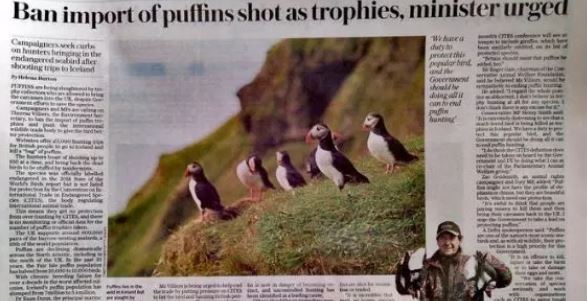 Conservative Animal Welfare Foundation has long called for trophy hunting imports to be banned. We believe this repulsive practice should be banned and we must show leadership on this.

Future generations will look back in condemnation that we allow this deeply disturbing activity to continue and tolerate the trophy hunting of our iconic species such as rhinos and elephants by a minority of people who take pleasure in shooting these vulnerable animals for recreation.

Carrie Symmonds recently tweeted against the trophy hunting of puffins: “Just can’t understand why anyone would want to shoot them. Mad.”

Sir Roger Gale said it was ‘abhorrent’ and told the Telegraph: “I don’t believe in trophy hunting at all for any species. I don’t think there is any excuse for it. I believe there is much more tourism to be generated by preservation and conservation rather than by killing puffins”. 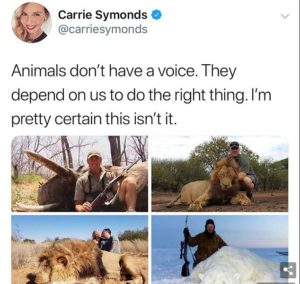 The Sun newspaper reported that Carrie hit out at ‘cruel and cowardly’ British tourists who pay thousands to go on African trophy hunts and shoot animals including elephants and giraffes and who can choose to kill an animal from a list of 65 species including £1,666 extra to shoot a giraffe and £6,422 for a hippo.

Tourists embark on trips to countries including South Africa, Namibia and Zimbabwe with tour operator Derek Stocker, 62, and his hunting company ProStalk.

While on the trips UK visitors can have souvenir pictures taken with their kills, and are even allowed to take parts of the animals back home.

Carrie slammed the activity, saying: ‘Can you imagine the hunters below fighting these majestic beasts without needing to hide behind a rock and without needing to use a massive gun? Of course not. That’s why it’s not only cruel beyond belief but as cowardly as it gets too.’