“A vision of hell”: Sickening scenes inside pig farm that shame Britain- The Mirror, June 2017 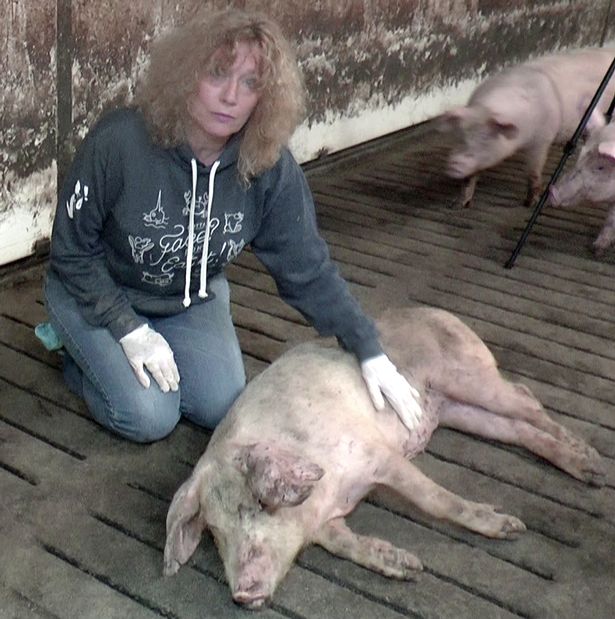 This Article was published in the Mirror  BY LEWIS PANTHER, June 2017

The distressed swine, destined for dinner tables up and down the country, swarm over one another in darkened barns to feed on the carcass.

It is a grisly scene… but there is worse, much worse, just a few yards way.

Activists from animal welfare group VIVA found another rotting hog with a huge wound being eaten by one of 15,000 pigs crammed into a farm owned by father-of-two Brian Hobill.

Skulls of two more pigs and a jaw bone and a leg that have been devoured in the same pen are a clear breach of guidelines.

More than 30 dead piglets covered in flies are also seen in the footage shot at Hogwood Farm, set in rolling fields near Stratford-upon-Avon, Warwicks.

Sick animals which should be in isolation, to avoid spreading disease, lie in a narrow walkway.

Nearly all are covered in their own muck and many bear scars.

VIVA founder Juliet Gellatley uncovered what she described as a “vision of hell” after a tip-off from a former employee.

Juliet – whose team walked through the farm’s open gates to shoot the covert film – said: “Hogwood hides a catalogue of pain and suffering, some of the worst conditions we have seen.

“Our footage shows cruel farrowing crates, which trap the pregnant sow in a metal pen when she could be walking over a field to make a nest out of twigs for her piglets.

“The other pens are overcrowded and the pigs show signs of stress. They are stuck in with dead and extremely sick pigs, dumped in gangways with no access to food or water.

“Others were dying in a filthy shed covered in cobwebs.”

Guidelines from DEFRA – the Department for Environment, Food and Rural Affairs – and the Farm Animal Welfare Council say dead animals should be swiftly removed and diseased ones isolated.

Juliet added: “One of the most disturbing scenes was adults eating the pig corpse.

“Cannibalism is not natural behaviour for pigs and is caused by this bleak environment.

“In the same pen are two skulls, a jaw and a leg. Presumably from pigs that have been left there to rot.

“Basic sanitation is nowhere to be found. Water troughs are soiled and everywhere pigs are covered in their own excreta.”

Juliet went on: “Outside one of the sheds housing these animals is a large wheelbarrow filled with over 30 dead pigs, in varying states of decay. It shows the high mortality rate as well as complete disregard for hygiene.

“Pigs were so tightly crammed into a disgustingly dirty industrial unit that it was hard to walk through them.

“Many were covered in lacerations and all were smeared in filth. In another shed, pigs were kept in groups in bare concrete cells with slatted wooden gangways.

“There was the cynical ­addition of a chain with plastic sheathing for biting hung limply, its novelty value long gone.

“This is to meet the Government’s recommendations on ‘environmental enrichment’!

“No straw, no bedding, just harsh, soiled floors, concrete walls and a life filled with utter boredom, frustration and no outlet for those active, intelligent, inquisitive minds.

“This, it is claimed, are the best animal welfare conditions in the world.

Guidelines from DEFRA and the Animal and Plant Health Agency warn of the risks of dead livestock on site.

They say: “You must ensure animals and birds can’t access the carcass.

“Bins can be a temporary store for fallen stock… they must be kept clean, disinfected, have lids and be leakproof.”

Animal welfare expert Dr Andrew Knight, of the University of Winchester, said the conditions were so bad that disease could be passed to humans.

He said: “They are a shocking reminder of how bad factory farming can be. Extremely poor hygiene, filthy, dilapidated pens and waterlogged floors.

“The dumping of dead, maggot-infested piglets in an open wheelbarrow and the incarceration of sows with no clean water to drink.

“There was a disturbing absence of care for sick and dying animals and dead pigs from pens hadn’t been removed.

“Several areas were waterlogged or covered in faeces and filth.

“This can cause the spread of disease and lead to public health concerns, given that meat from these pigs will be marketed to unsuspecting consumers.

“The lack of space severely limits natural activities and limits the ability of pigs to escape aggressive others – as evidenced by the flank wounds visible on some pigs, which are normally caused by attacks.

“The dumping of obviously sick pigs with others in a walkway indicates gross neglect, a lack of veterinary care and a failure to abide by the DEFRA Codes of Practice.”

Farmer Hobill said of the allegations: “The care of our animals is our top priority.

“These pictures taken by Juliet Gellatley, leader of an extremist vegan group, do not represent the general health of the animals on the farm.

“There does appear to be shortcomings on deadstock removal. However, we will review our policies and ensure these are followed.”

He claimed to have CCTV of Juliet “manipulating the scene”, adding: “Therefore we cannot be completely sure as to the accuracy or intent of this footage.”

Juliet replied: “The only pigs touched were a dying one which I comforted and a ‘runt’ piglet in distress which I gently moved to his mother’s teat.”