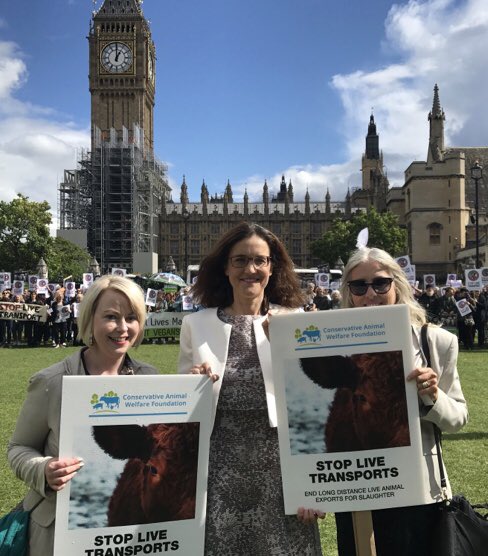 Conservative Animal Welfare Foundation( CAWF) welcomes the Government’s announcement of a call for evidence for a potential ban on the live export of animals for slaughter after Brexit.

“The announcement of a consultation with an aim to ban live animal exports on Brexit is yet more welcome welfare development, possible as we leave the EU and another clear commitment from this Conservative government to secure greatly enhanced protections.”

Craig Mackinlay MP hosted the event to end live exports with Stop Live Exports Team, Conservative Animal Welfare Foundation and Compassion in World farming on  29 January  2018 with celebrities  to urge for an end to live exports, and also to support Patron Theresa Villiers MP Bill to end the trade and the Westminster Hall debate on live exports on 26 February 2018.

Taking action on live animal exports forms part of the government’s programme of reforms to cement the position as a global leader in animal welfare as we leave the EU and deliver a Green Brexit.

Stakeholders have responded positively, including the British Veterinary Association (BVA). President John Fishwick said that the BVA welcomes the launched of the government’s call for evidence and looks forward to contributing to it.

( Calves packed into lorries for 135 hour journey published in the Times, 26 February 2018): https://www.conservativeanimalwelfarefoundation.org/1427-2/

Ban on live animal exports for slaughter explored by government

The Environment Secretary has launched a call for evidence for a potential ban on the live export of animals for slaughter once the UK leaves the EU. 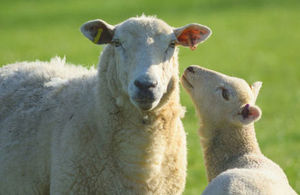 A call for evidence for a potential ban on the live export of animals for slaughter after Brexit has been launched by Environment Secretary Michael Gove. It will also look at higher welfare standards for live animal movements.

Taking action on live animal exports forms part of the government’s programme of reforms to cement our position as a global leader in animal welfare as we leave the EU and deliver a Green Brexit.

The Farm Animal Welfare Committee has also launched a review into the existing welfare standards for animals during transport, and this is being complemented by research commissioned by Defra from Scotland’s Rural College and the University of Edinburgh.

We have some of the highest animal welfare standards in the world which we are strengthening further by raising maximum sentences for animal cruelty to five years and introducing mandatory CCTV in abattoirs.

All animals deserve to get the respect and care they deserve at every stage of their lives. This call for evidence begins to deliver on our manifesto commitment which aims to control the export of live animals for slaughter once we leave the European Union.

With all options being considered, I am keen to hear from industry, the devolved authorities and charities on all possible options and evidence on this vital issue.

The call for evidence, which will last for six weeks, seeks views from across industry, devolved authorities, charities and the general public on how the government might raise standards of animal welfare during transport after the UK leaves the EU. All options for future improvements in this area are being considered, including a potential ban on the live export of animals for slaughter.

Latest figures, from 2016, show that each year over four thousand sheep are transported from the UK to continental Europe for slaughter.

“It is vital that we maintain the UK’s current high standards of animal welfare post-Brexit and seek opportunities to improve them. We look forward to contributing to this call and seeing the results once the evidence has been collected.”

This announcement builds on a wide range of animal welfare reforms announced by the government, including:

We will discuss the evidence and any future proposals with the Devolved Administrations.