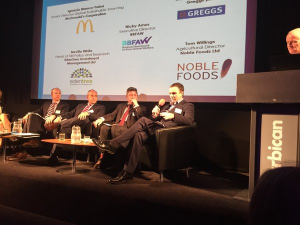 Our Co Founder attended the Business Benchmark on Farm Animal Welfare (BBFAW) conference in London, established by Compassion In World Farming, World Animal Protection and investment firm Coller Capital to measure how well businesses are reporting on farm animal-welfare issues, and ranks them accordingly in an annual report. It’s the first rating system of its kind in the world.
( From the Compassion In World Farming release on the conference) ‘The initiative is designed to stimulate competition among businesses – including producers, processors, manufacturers and food retailers – so that humane farming is put higher and higher on the agenda. Its findings are available to anyone with an interest in animal welfare as a business issue, from companies, NGOs and retailers to investors, academics, government officials and consumers.

The ripple effect
Major food companies have the potential to make a difference to the greatest number of farm animals every year – tens of billions of animals.

Secondly, they have the power to create ripple effects of positive change that filter down through the whole industry, catalysing smaller brands to make similar commitments in an effort not to look outdated.

Great Strides
Since its launch in 2012, BBFAW has gone from strength to strength. For example, the proportion of companies with a published farm animal-welfare policy has increased from 46% in 2012 to 69% in 2015, and the proportion with published objectives and targets for farm animal welfare has increased from 26% in 2012 to 54% in 2015. Several companies have even improved their performance over this period.

Despite all the good news, however, a staggering 40% of companies (including Burger King, Domino’s Pizza Group (UK) and Starbucks) still offer little or no insight into their approach to farm animal welfare. As BBFAW Executive Director, Nicky Amos, says: “Despite the progress, it is clear that there is much work to be done to get farm animal welfare on the business agenda of many large global food companies”.

What can you do?
Although BBFAW is all about big food companies and their approach to animal welfare, that doesn’t mean you’re not part of the picture – far from it, in fact. As we all know, consumer choices at the checkout can have the biggest impact of all on the policies and practices of large multinational corporations.

So keep in mind next time you go shopping that every purchase you make is a chance to vote for better food and farming – by making fairer, greener, healthier food choices, and by eating less (but better-quality) meat. Make your voice heard today.

The results are in
The latest results have been announced for 2016. This time, 90 leading global food companies were involved (that’s ten more than the year before) and the joint leaders are the incumbents, Waitrose, Marks & Spencer and the Coop Group (Switzerland), as well as Noble Foods, which has climbed a tier.’

Our Co Founder also spoke to Rosie Wardle and Alan Briefel,  CEO of  FAIRR- Farm Animal Investment Risk & Return organisation which has produced a new report which explores the industrialisation of the world’s meat and fish production. The report comments that over 70% of the world’s farm animals are now factory farmed, including an estimated 99% of US farm animals. It assesses the potential risks that a range of environmental, social and governance( ESG) issues present to this model.