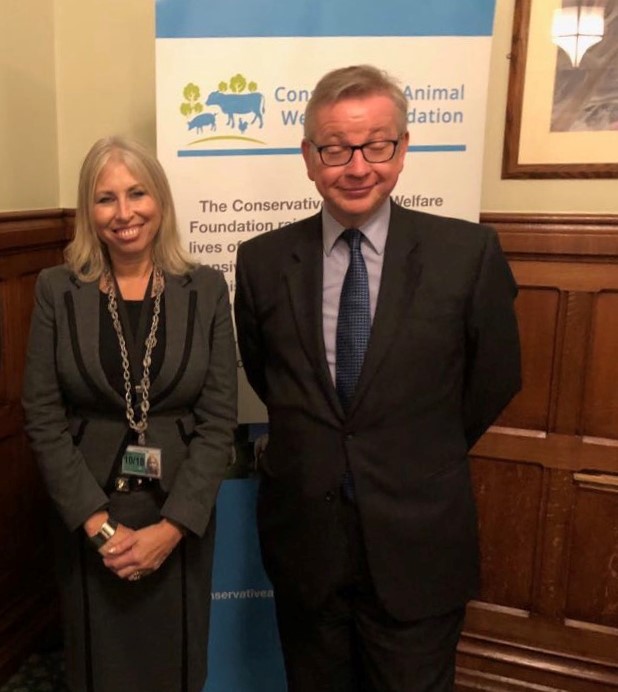 The private one to one meeting follows Conservative Animal Welfare Foundation’s parliamentary joint event with the Conservative Environment Network the month before, at which the Secretary of State delivered a speech on animal welfare and the environment before MPs, Sir John Randall, adviser at No10 on Animal Welfare and the Environment, the president of the BVA, Chairman of FAWC, APGAW, spokespersons from RSPCA, IFAW, Link, Defra , Farmwel , FAI Farms, Carrie Symonds, Director of Communications for the Conservative party and more guests.  https://www.conservativeanimalwelfarefoundation.org/1107-2/

“The meeting was positive and constructive.We covered a wide range of animal welfare issues. Conservative Animal Welfare Foundation applaud Michael Gove for the important animal welfare advances that have been announced recently. We have campaigned daily for the introduction of mandatory CCTV in all slaughterhouses to help lessen animal suffering and are delighted that this necessary measure will be introduced as legislation this year. We are impressed with the animal welfare measures that our Secretary of State has recently announced and we look forward to more positive measures to advance animal welfare  and the environment in the months ahead.”

The meeting included discussions on live animal exports for slaughter which Conservative Animal Welfare Foundation campaigns to end along with an end to pig farrowing crates, hen cages and  for the introduction of  method of production labelling  on how animals are reared and slaughtered so people can make an informed choice. Discussions on protecting Farmers from lower welfare imports took place.