Cruel electric shock collars for pets to be banned, 27 August 2018 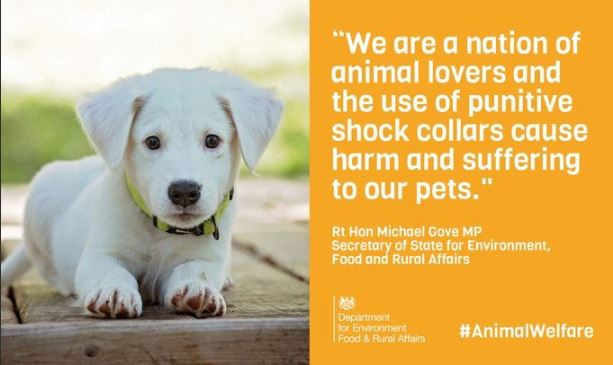 From:
Department for Environment, Food & Rural Affairs and The Rt Hon Michael Gove MP
Shock collars to be banned
Cruel electronic training collars which are used for dogs and cats are to be banned under new legislation, the Government has announced.

Remote controlled electronic training collars (e-collars) have a remote device that triggers an electronic pulse, which can be varied in strength, while others may spray a noxious chemical. As well as being misused to inflict unnecessary harm and suffering, there’s also evidence e-collars can re-direct aggression or generate anxiety-based behaviour in pets – making underlying behavioural and health problems worse.

The action follows a public consultation on a proposed ban for all e-collars.

However, after listening closely to the views of pet owners and respondents, the Government will not extend the ban to invisible fencing systems which can keep pets away from roads and potential traffic accidents. These devices are particularly useful for cat owners and animals often respond well to invisible fencing and quickly learn to stay within a boundary without receiving a static pulse.

We are a nation of animal lovers and the use of punitive shock collars cause harm and suffering to our pets.

This ban will improve the welfare of animals and I urge pet owners to instead use positive reward training methods.

The consultation attracted over 7,000 responses. Around 50% of respondees specifically pointed out that they did not want containment fences banned.

A considerable number of responses, whether supportive of a total ban or supportive of invisible fencing, also expressed concern at the number of people who use the hand-held devices incorrectly and without proper training.

For further information please see the Government’s full response to the consultation. https://www.gov.uk/government/consultations/animal-welfare-banning-the-use-of-electronic-training-collars-for-cats-and-dogs