Our Co Founder along with our Patron Sir Roger Gale attended the All Associate Parliamentary Group For Animal Welfare( APGAW) meeting on farm animal welfare in the Commons on 12th July.
We asked a question on the non stun slaughter ban in some European countries and how had this been achieved to incoming BVA Junior Vice President John Fishwick after his talk on the importance of non stun slaughter.

John Fishwick talked on why the British Veterinary Association calls for animals to be stunned before slaughter.

Link to the BVA website on this issue: https://www.bva.co.uk/News-campaigns-and-policy/Campaigns/An-end-to-non-stun-slaughter/ 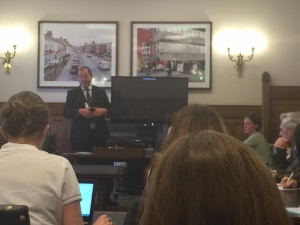 a) Defra’s Proposed 25 Year Plan on Food & Farming Peter Stevenson, Chief Policy Advisor, Compassion in World Farming The plan is likely to focus on increasing productivity, competitiveness and agri-tech but it also needs to consider animal welfare, public health, natural resources and the Paris Climate Agreement’s target of keeping temperature rises to well below 2°C. Is this possible and how?

b) Transforming Food Culture Jo Lewis, Director of Strategy and Policy for Food for Life Food for Life is a programme seeing to change food culture in schools and wider communities to develop an understanding of how food is grown, learn about sustainability, make connections with health and the impact on the environment, and care about how food was produced or reared.

c) The Importance of Humane Slaughter & CCTV John Fishwick (incoming Junior Vice President) British Veterinary Association 64% of UK vets chose welfare at slaughter or pre-stunning as a top priority for government and 9 out of 10 vets believe consumers should be better informed about slaughter methods. The BVA will set out their reason for prioritising non-stun slaughter, CCTV in slaughterhouses and welfare standards for production animals.