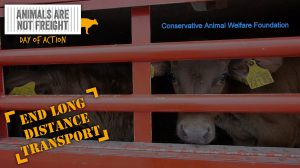 I am a Conservative Party member and hope to see this stopped. I was brought up in farming at a time where the farmers I knew had compassion as well as moral and ethical values. Animals were killed near their place of birth, albeit they were sometimes transported within the country by road or rail. These were very short distances compared to the sickening practice of today. Farmers, including those in my own family refused to sell animals for shipment abroad. They tipped each other off when foreign buyers or their agents were around and their animals were either not put in the sales or bought by those they knew. Many took their own animals to the slaughter houses to keep a check on how they were treated.

So there were farmers who cared about welfare long before a group of scientists signed a declaration to acknowledge animal consciousness at Cambridge in 2012 (Francis Crick Memorial Lecture) In spite of the latter it seems some modern farmers ignore welfare by supporting the despicable practice of long distance live exports for slaughter’.