Campaigners and MPs will spoke out on the International Awareness Day global  to stop live animal transports/ live exports on 14 June 2018.

Protesters gathered outside Parliament on Thursday as part of a global day of action against long distance live animal transports.Campaigners gathered on Parliament Square between 12.30pm and 2pm
Demonstrators held up signs that read “Stop Live Transports” as MP speakers including Conservative Animal Welfare Foundation MP Patrons, Sir Roger Gale, Sir David Amess, Zac Goldsmith and Theresa Villiers urged for an end to the suffering in live animal exports for slaughter and fattening.

Organisations around the world  joined ranks for the day to host rallies, marches and talks – from London to Paris and Tel Aviv to Sydney.
Compassion in World Farming, organised the event for the last few years and said that millions of animals are transported long distances in cramped conditions every year, causing horrific levels of suffering. Many animals often die before the end of the journey, or face “cruel” slaughter methods at their destination.
Conservative Animal Welfare Foundation joined the rally with our Patron Sir Roger Gale MP. We condemn the “unnecessary” export of live animals for slaughter and believe the trade “should be replaced with a trade in meat on the bone, not on the hoof’.

“This is a war we can win, we are going to win this one!” – Sir Roger Gale 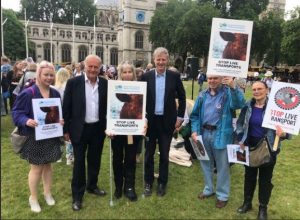 Sir David Amess MP explained why everyone should care about banning live exports.

“We will not tolerate this continued cruelty to farm animals… I will be fighting, to see at last, a complete ban on live exports! ” 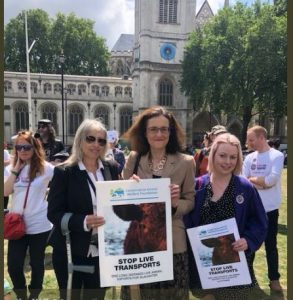 “Live export of animals is cruel, debasing, and causes huge distress for the animals being shipped. DEFRA  need to take action as do the shareholders of the haulage and shipping companies involved. Exported animals should be slaughtered in the UK before shipping”.

“It’s fantastic to see so many people here!…animals are sentient beings, we need to respect them, and that means a ban on live exports”

Actor Peter Egan  spoke on the misery and suffering of live exports.

‘We urge for an end to live exports for slaughter and fattening. We want to see an end to this vile trade which causes deep misery and suffering to farm animals. It is unnecessary to subject animals to these journeys for slaughter and fattening. We will speak out for the voiceless and press for the ban to be introduced as soon as the UK leaves the E 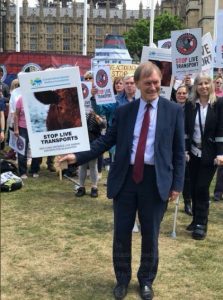 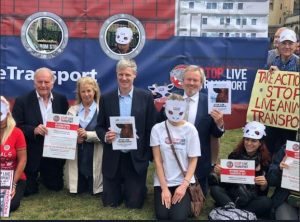 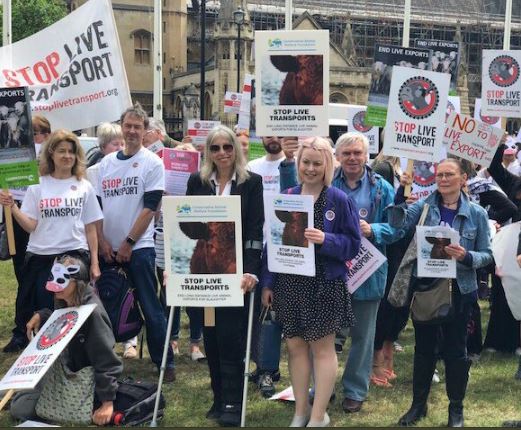 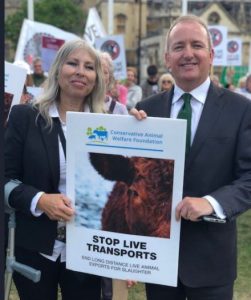