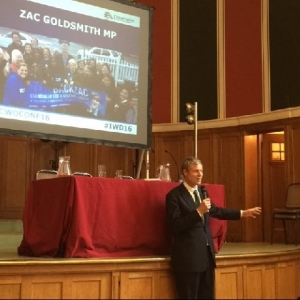 Zac Goldsmith has pledged to bring the countryside into the city by setting up 100 “pocket farms” in primary schools during his first year in office.

The Tory mayoral candidate said he would fund green spaces for children to grow their own food, raise chickens or learn about the great outdoors.

He would establish a programme of twinning primary schools in the city with rural farms to help children spend more time in the country.

One in 10 London children have never been to the countryside despite studies suggesting that contact with nature supports mental and physical health. Mr Goldsmith announced his plans on a visit to Grey Court School in Richmond, which has its own farm, cooking club and community allotment, with Environment Secretary Liz Truss.

He said by 2020 he would make sure all London schools met the Government’s school food standards and the majority purchased sustainable healthy products. London has higher rates of childhood obesity than any other part of the UK.

Mr Goldsmith said: “Making our children aware of the environment around them and where their food comes from is vital to their future wellbeing.”