It is time the question is shifted from whether fish can suffer, to how we are going to protect their interests given that they can. 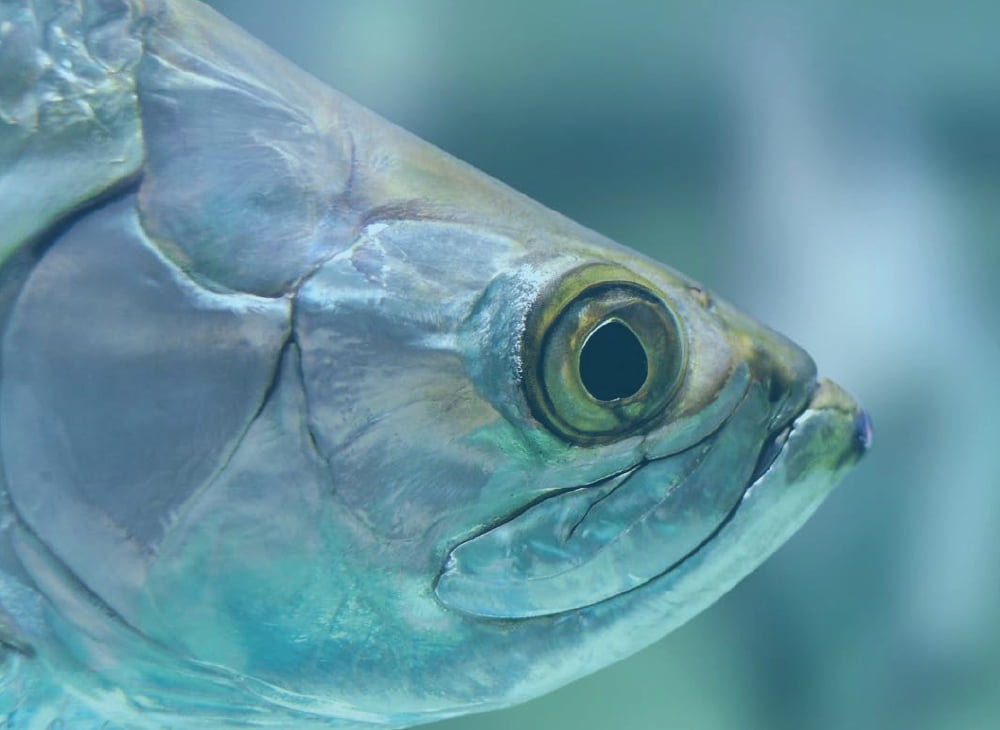 We Call For An Improvement to Fish Welfare

The UK was one of the first countries to introduce animal welfare legislation (1), and to this day stands as one of the strongest countries for protecting farmed animal wellbeing. However, fish have typically been left out of this progress. Today, the UK farms an estimated 28 to 77 million (2) fish and catches a further 1.5 to 2.7 billion (3) every single year, with close to no regulation on the treatment of these animals.

The scientific community found evidence for fish sentience over two decades ago, and now this is broadly recognized by consumers. 76% of people in the UK believe the welfare of fish should be safeguarded to the same extent as other animals farmed for food.(4) However, the current lack of legislation has created an animal welfare crisis that is as massive as it is inhumane.

Global competition and the depletion of wild fish stocks has forced producers to adopt rapid intensification, and, in the process, sacrifice long-term sustainability. In fisheries, trawlers level entire ecosystems to the ground and catch thousands of fish in crowded nets.

The majority of the billions of fish caught in UK waters die from asphyxiation (oxygen depletion). During this cruel slaughter method, fish can remain conscious for up to 1-2 hours before being relieved from their suffering. In fish farming, an epidemic of sea lice is costing the industry millions each year. Mortality rates that would be alarmingly high in other farmed animal sectors are accepted as routine. Production is unstable, and the industry is now habituating dangerous practices, pouring in money to keep this precarious situation viable (and leaving fish, the environment, and social welfare to absorb the cost).

However, there are viable alternatives. Across the globe, more and more consumers are searching for higher welfare products. There are effective ways to help improve fish welfare. Having left the EU, the UK has been presented with a unique opportunity to uplift entrepreneurial farmers and fishers and pave the way for the rest of the world. This could benefit social welfare, the environment, and the billions of fish that are harvested each year. There are many ways that fish welfare can be improved that we believe can help the UK continue its legacy of innovation in the animal welfare space and legislating for compassion.

What Needs to be Done

These include introducing mandatory labelling  which will educate consumers and correctly indicate the welfare implications of seafood products. Improvement of Dermersal and Beam Trawler Management by introducing seasonal restrictions and introducing a timeline to end such fishing methods to replace with more welfare-friendly and sustainable capture methods. We need to improve the welfare of fish during capture and landing to decrease the risk of injuries and introduce pre-stunning death. We must establish stronger monitoring and site assessment systems to locate farms based on low sea lice levels and create no-farming zones to break sea lice dispersal.(5) Importantly we must advance fish welfare by earmarking funds for ongoing research.

The UK has been progressive when it comes to animal welfare, but as of now, fish have been excluded from most of these welfare reforms. At a time when production continues to intensify, it is more important than ever that fish welfare be seriously considered. Moving forward, fish welfare must be recognised as a necessary part of building a sustainable, socially conscious, and ethical food sector. At its best, fish welfare is not only an innately valuable pursuit, but also acts as a guide towards a better food sector overall.

We believe that the suggestions outlined above stand as ambitious but important steps towards properly engaging with the World Organisation for Animal Health standards that the UK has committed to. They will help put the UK at the forefront of fish welfare and stimulate world-wide change. However, these suggestions are not enough, and continued, incremental efforts toward higher animal welfare standards seem to be the best model for the UK to follow. The aquaculture and fisheries sectors have to reassess their practices to avoid continuous economic loss from diseases and mortalities. With rising temperatures and more severe weather, farming carnivorous and highly migratory species such as Atlantic salmon does not appear to be a future-proof undertaking. Decision-makers should provide incentives to promote forward-thinking and ethically conscious industry practices.

It is important that the UK government acts on the manifesto commitment and enshrines animal sentience in UK law as soon as possible. The Animal Welfare (Sentencing and Recognition of Sentience) Draft Bill 2017 defines animals as all organisms ‘endowed with life, sensation and voluntary motion’. Fish are included under this definition, and we should not exclude them from the final bill.

Crustaceans Have Feelings Too

We also know that Crustaceans have the capacity to suffer and scientific evidence shows it is likely that crabs and lobsters feel pain. Decapod crustaceans should now receive full protection under the UK’s animal welfare laws, just like they are protected in Norway, Switzerland. Austria, some Australian territories, and New Zealand.

A recent letter by vets urged for an end to boiling lobsters alive after scientific evidence finds the animals do feel pain and chefs are urged to stun them before they are killed. Crustaceans should be included in the new legislation to bring in new laws on animal sentience in the UK.

If fish are part of our food diets, it’s important to remember that the majority of people believe that the welfare of fish should be safeguarded to the same extent as other animals farmed for food.

Ultimately, we believe that fish deserve a seat at the table, and their interests should be included as a factor within any decision that affects them. Stereotypes of fish as unintelligent and unsophisticated have prevented this from happening before now. It is time the question is shifted from whether fish can suffer, to how we are going to protect their interests given that they can.

1 Krawczyk, V. J., and Hamilton-Bruce, M. A. (2015). The Origins of Compassion for Animals: Legal Privileging of Non-Wild Animals in Late Georgian Britain.

5 This has been shown to be a promising way of reducing transmission. See Samsing, F. et al. (2019). Identifying ‘firebreaks’ to fragment dispersal networks of a marine parasite.

We believe we can help the UK continue its legacy of innovation in the animal welfare space and legislating for compassion. 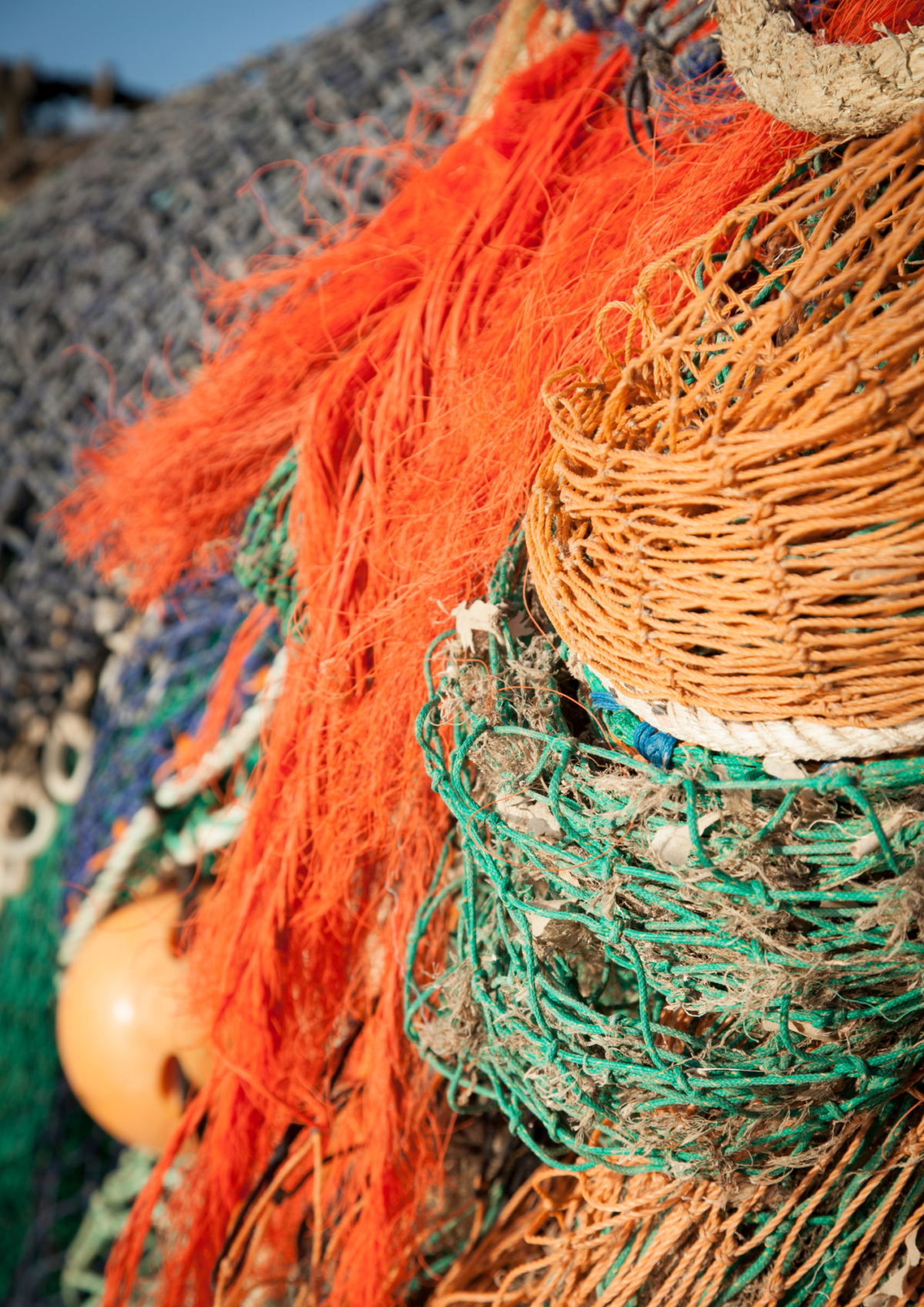 The Legal Protection of Farmed Fish vs Terrestrial Farmed Animals 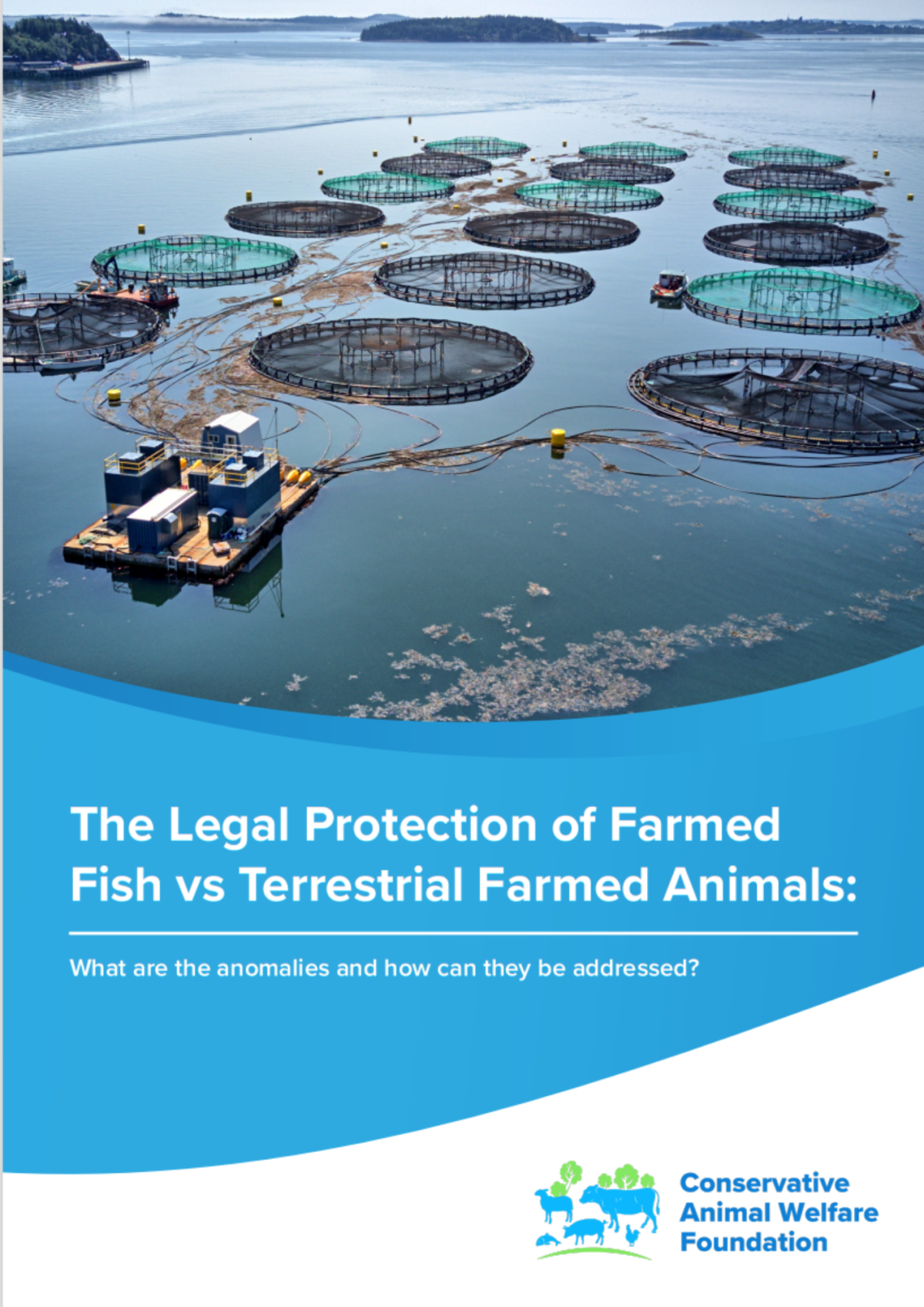 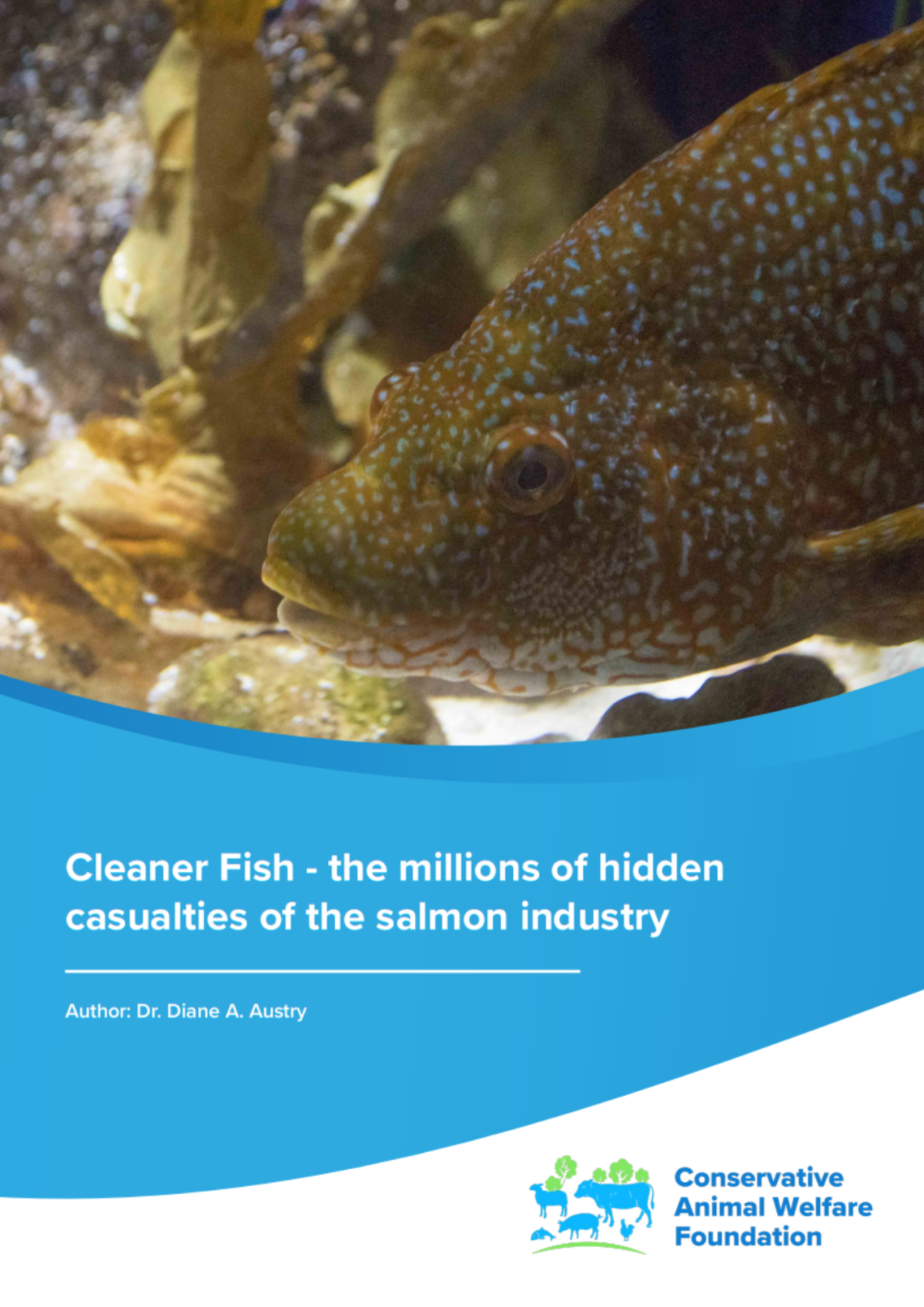 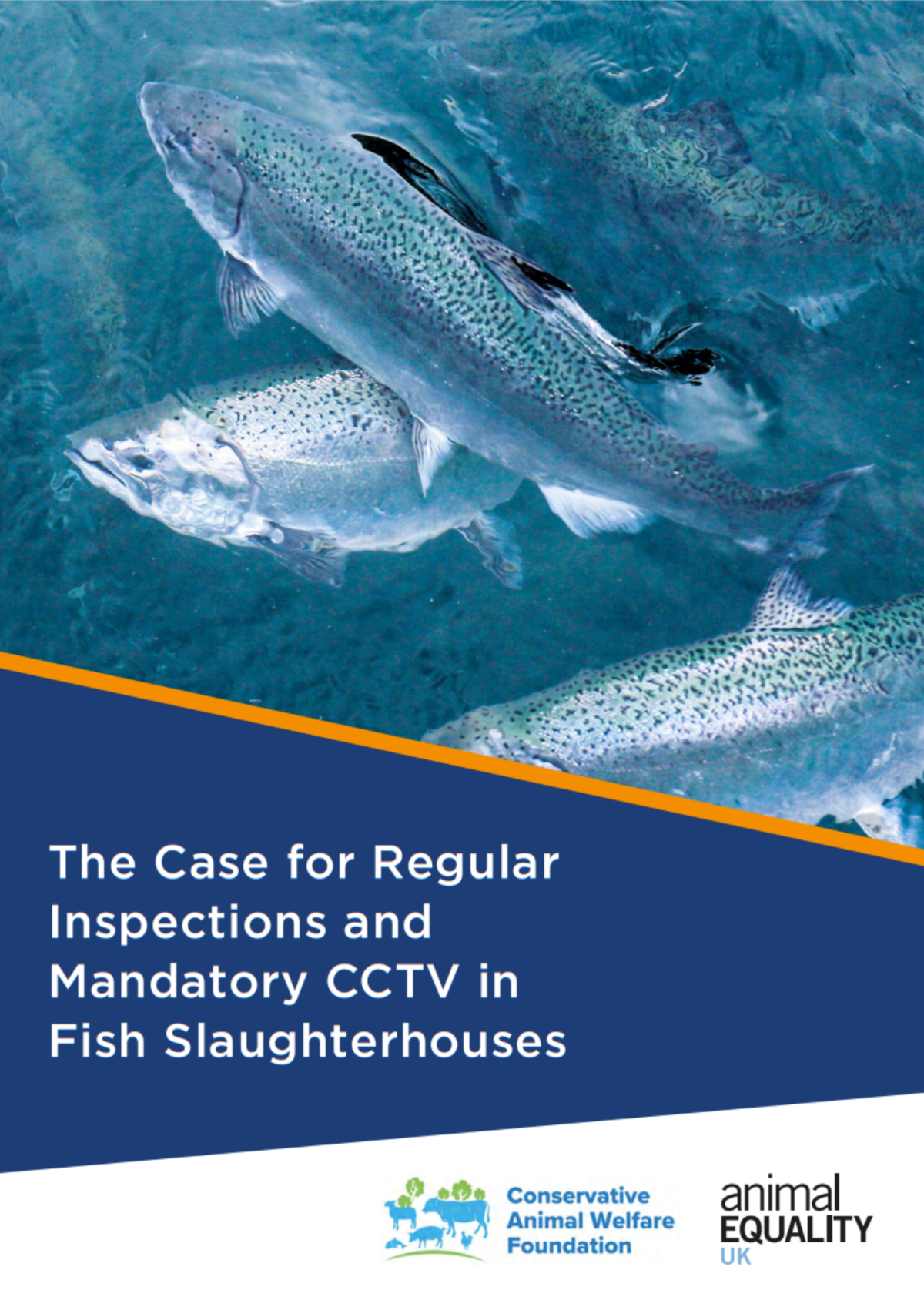 The Welfare of Farmed Fish at the Time of Killing 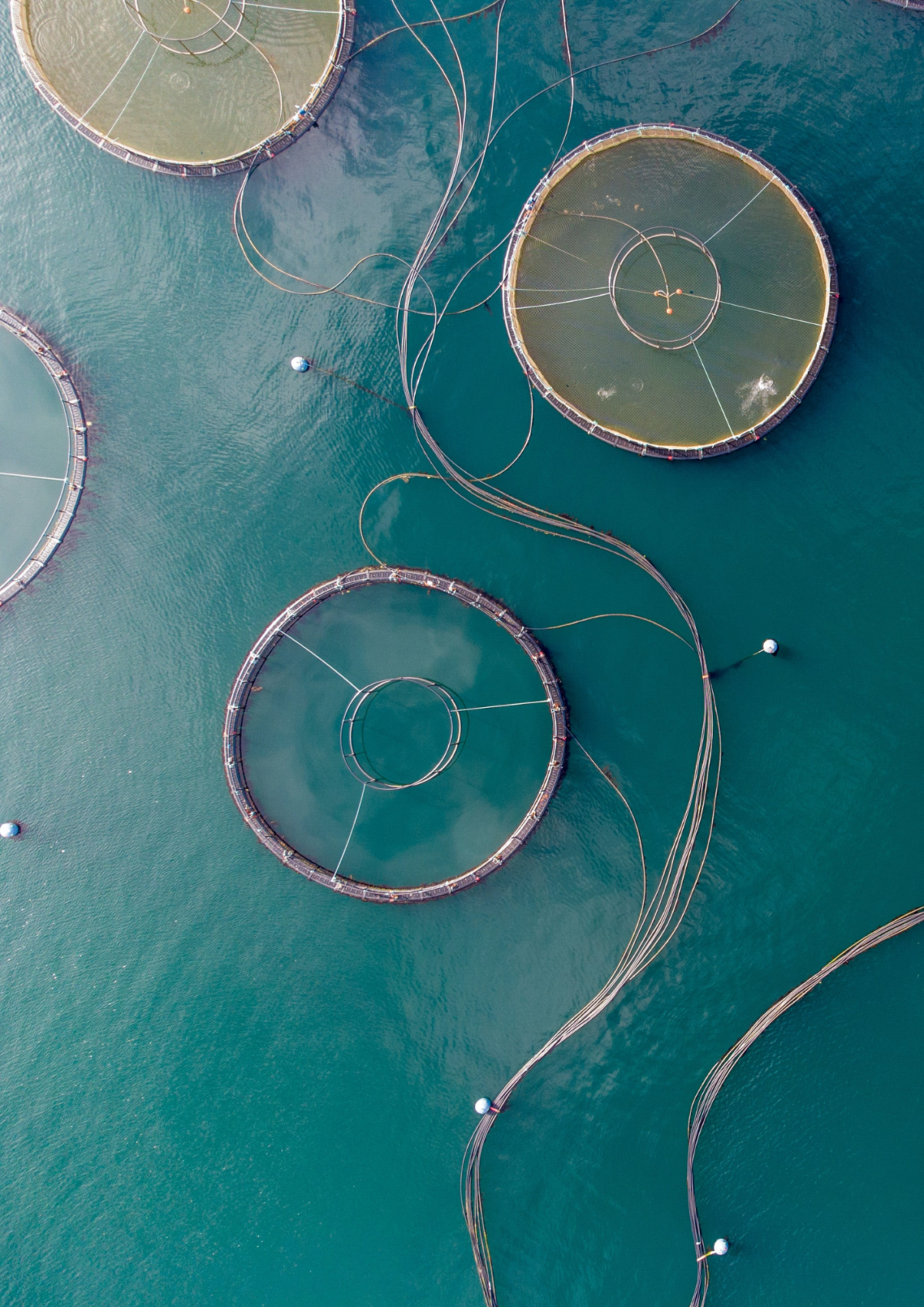 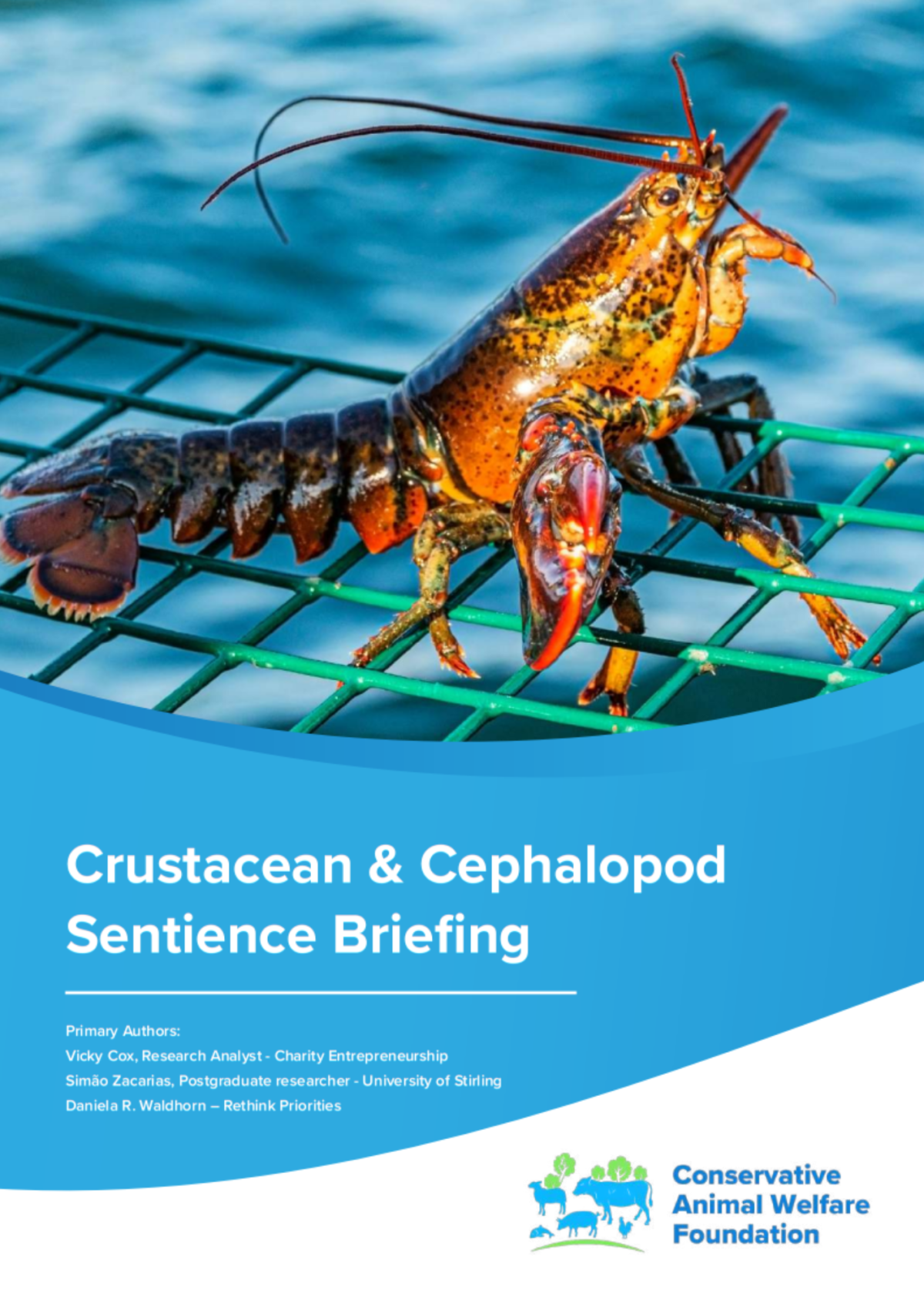 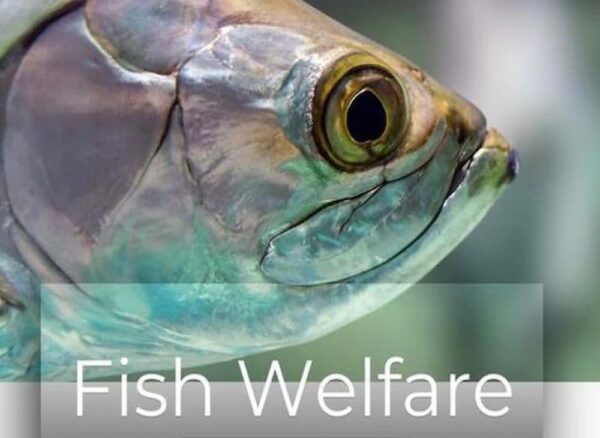 The Conservative Animal Welfare Foundation (CAWF) has welcomed a session of the All-Party Parliamentary Group for Animal Welfare focussed on increasing welfare protection for farmed fish. The purpose of the meeting was to consider current protections for farmed fish, including the effectiveness of voluntary schemes, and whether action needs to be taken by industry and government. 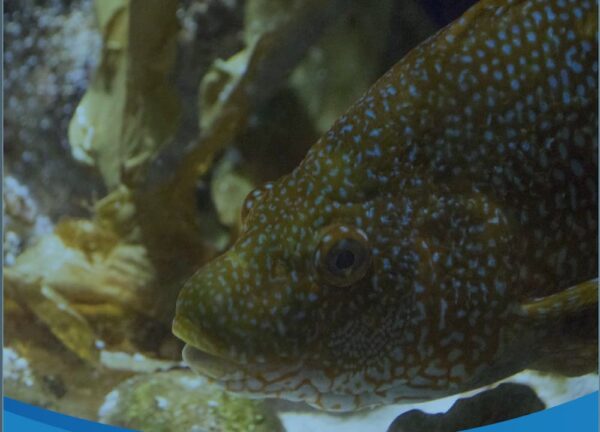 The report, ‘Cleaner Fish – the millions of hidden casualties of the salmon industry’, spotlights the use of lumpfish and wrasse species as cleaning tools to consume sea lice on salmon farms, primarily in Scotland 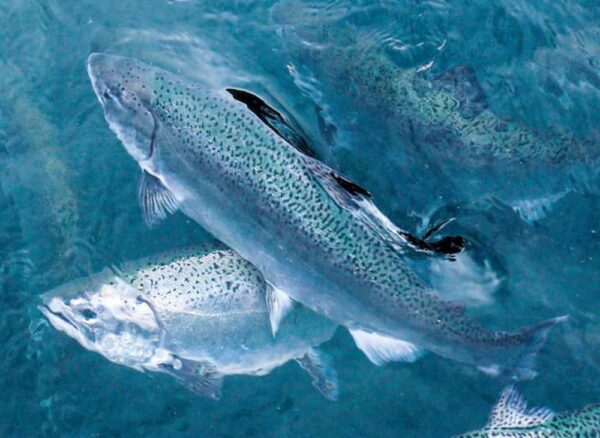 The Case for Regular Inspections & Mandatory CCTV in Fish Slaughterhouses