We believe animals should be slaughtered as close as possible to their place of birth and live transports to be replaced by a trade in meat. The meat can be exported in chilled conditions on the hook rather than on the hoof. 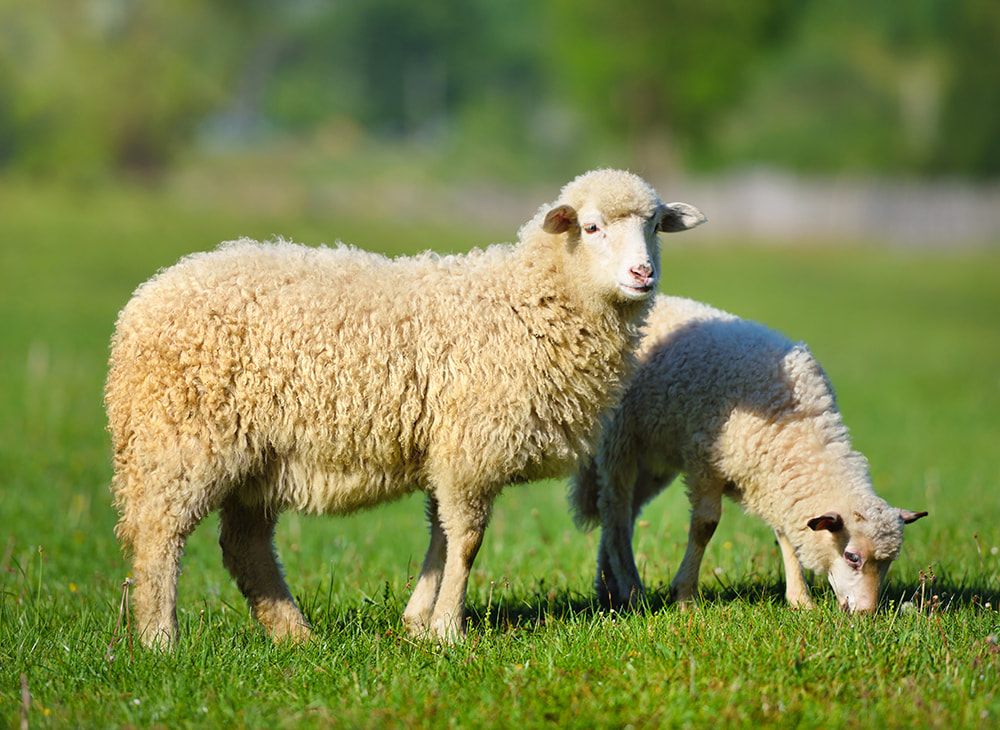 We Call for a Ban on Live Animal Exports for Slaughter and Fattening.

As the UK will soon no longer be bound by the EU’s free trade rules, we call for the Government to ban the live export trade for slaughter and fattening which over the years has caused immense suffering to our animals.

Thousands of UK sheep are exported each year on long journeys to France. UK calves are also exported – and travel as far afield as Spain, despite the fact that scientific research shows that young calves suffer greatly during long journeys. Long-distance live animal transports can cause immense suffering.

Overcrowding will mean that some cannot lie down at all, while those who do may be injured or trampled to death. Others endure long journeys with legs trapped and injured, or painfully stooping as they are not given sufficient headroom. They can be in transit for days, suffering extremes of temperature and often without sufficient food, water or rest and can be exhausted and dehydrated. Many die as a result.

Animals are transported in both blistering heat and freezing conditions. Water may not be provided throughout these long journeys. In particular, when animals are exported from Europe to countries outside the EU they leave behind them all the legal protection they once received.

We believe animals should be slaughtered as close as possible to their place of birth and live transports to be replaced by a trade in meat. The meat can be exported in chilled conditions on the hook rather than on the hoof.

We are concerned about serious animal welfare issues related to animals being exported for slaughter or fattening. Defra’s own ‘Call for Evidence” notes from their 2018 consultation state that ‘transport itself can be stressful for animals, for example as a result of loading, unloading and transportation in an unfamiliar environment’. The same Notes, No19, further reports:

‘There is evidence to show transport can compromise animal welfare in a number of ways, though, for example, extreme temperature ranges, lack of food and water, insufficient ability to rest, noise and vibration.’

The science clearly shows that as journey time increases welfare decreases yet EU regulations allow animals to endure extremely long journeys which can last days. There is a need for much-improved enforcement, the maximum journey time is too long and stocking densities are too high.

There are many serious deficiencies in the current regulations. Checks by authorities are too infrequent or not carried out to a high enough standard. Trucks transporting livestock have been found to regularly breach EU legislation on driving hours putting the driver, animals, and other road users at risk. Livestock trucks are not always inspected in-country for their suitability to carry specific species and this has resulted in cases where animals suffer painful injuries. The current enforcement system is severely limited by a lack of coordination between regulatory bodies of different countries.

Eyes on Animals has exposed violations of the regulations. Breaches that should have been identified at point of inspection by the OV/inspector at point of loading or/and at the portal inspection.

Animals drink from troughs and buckets when in fields etc. so many do not understand how to use the water nipple systems on trucks. Stocking density and dominant animals prevent all animals accessing any type of water system. Troughs need checking often as animals will soil in the troughs due to limited space. There are limited places to access and replenish water on journeys.

The floor of the trucks covering becomes inadequate after a few hours of travel, causing issues of disease and unnecessary suffering as animals do not want to lie in the waste. The more animals onboard the more waste. Minimal amounts of floor covering are used for slaughter animals. Suitable bedding should be provided. Animals arrive covered in their waste.

Many sheep are being loaded in the North, enduring long journeys before they even approach Ramsgate Port and are being sent for non-stun slaughter in mainland Europe.

Calves should not be exported for fattening in veal crate systems on the continent which are banned in the UK. Calves placed into the Dutch white veal pen systems, where they are unable to perform natural behaviour, are kept in pens where they are barely able to turn around and are not given any straw bedding. The Times newspaper recently reported on two-week calves from Scotland enduring 135-hour journeys.

There is also evidence that calves exported to Spain for beef production are then being re-exported to Third counties such as Lebanon and Turkey where non-stun slaughter is the norm. Again, once UK animals leave our shores, we have no control as to where they end up under current EU regulations.

Pigs should not be exported to systems where sow stalls exist, which are banned in the UK. The UK is unable to safeguard the welfare during transport and slaughter of exported animals once they leave the UK.

Animals may be re-exported from their initial destination. In the 1990s the UK exported large numbers of sheep to the continent. Many were sent to the Netherlands. However, within a day or two of their arrival many were re-exported to Greece, Spain and Italy.

Similar problems could arise in future where UK animals are exported to one EU Member State and then are re-exported to another that has lower standards regarding enforcement of EU legislation on animal welfare during transport and slaughter. Under Regulation 1/2005 a new journey may start just 48 hours after arrival at the initial destination. There is a possibility that animals exported from the UK to an EU Member State could be re-exported to the Middle East, North Africa or Turkey. The EU exports around three million cattle and sheep a year to these destinations.

There are economically viable alternatives to live exports. Sheep should be slaughtered in the UK with exports being in the form of meat. Calves exported from the UK are mainly male dairy calves. Traditionally these were thought to produce poor quality meat which is why they were exported. However, in recent years farmers have been successful in rearing more of these calves for beef here in the UK. No calves should be exported, nor should they be shot at birth; they should be reared in the UK to high welfare conditions. In light of the small proportion of the UK sheep flock and calf herd that is exported for slaughter or fattening, it is hard to believe that live exports play any real role in achieving buoyancy for prices or that an end to exports for slaughter or fattening would have a significant impact on farmers’ incomes.

Ban on Exports and Fattening

A ban on live exports should include both exports for slaughter and fattening. There are two reasons why the ban should extend to exports for fattening.

Calf exports-A ban on exports for slaughter only, would allow calf exports to continue as calves are being exported for fattening; they will be fattened for several months for veal or beef.

Sheep exports CIWF has been monitoring the live export trade for over forty years. Sheep (other than those exported for breeding) are nearly always being exported for slaughter. They will be slaughtered on or within a day or two of arrival.

The reason for a slight delay in slaughter may be because the abattoir has a large number of sheep awaiting slaughter or to allow the animals to regain the weight lost during transport. Sheep are sometimes exported with production (fattening) health certificates as sometimes sheep will not be slaughtered immediately on arrival but only after a delay of a day or two. A ban on exports for slaughter alone would not apply to these sheep. Moreover, some exporters may be tempted to switch to using fattening health certificates to avoid the ban on slaughter exports.

Conservative Animal Welfare Foundation organised a parliamentary reception in December 2017 jointly with Conservative Environment Network, to end live exports for slaughter and fattening and our key campaigns. The event was hosted by Sir Roger Gale MP and the Secretary of State Mr Michael Gove delivered an excellent speech on ending the misery and suffering in live exports.

We organised a further parliamentary reception to end live exports with Stop Live Exports Petition Team and CIWF in January 2018 hosted by Craig Mackinlay MP. The reception was well attended by over 50 MPs.

In May 2018 Conservative Animal Welfare Foundation Patron Sir David Amess MP talked on ending live exports at the Esher and Walton Conservative Women’s Organisation lunch event on animal welfare which featured an introduction by our Founder.

We hosted a fringe event at the party conference on the 1st October with the Conservative Environment Network, hosted by Zac Goldsmith with a strong focus to end live exports for slaughter and fattening. Speakers included Theresa Villiers and George Eustice talked on general animal welfare issues.

In 2019 Sir David Amess MP hosted a fringe event at the party conference with our end live exports banners next to the lectern and our Speakers included the Foreign Secretary Dominic Raab, Carrie Symonds and Stanley Johnson.

We are involved in the annual International global awareness day to end live transports with our MP Patrons.

Years ago, the UK ended veal crates and sow stalls which were once thought acceptable. Now the time is long overdue to end the unnecessary suffering caused by live exports for slaughter and fattening. We do not oppose a ban on genuine cross- border trade from Northern Ireland to the Republic of Ireland.

We urge for an end to live exports as soon as the transition period is over. 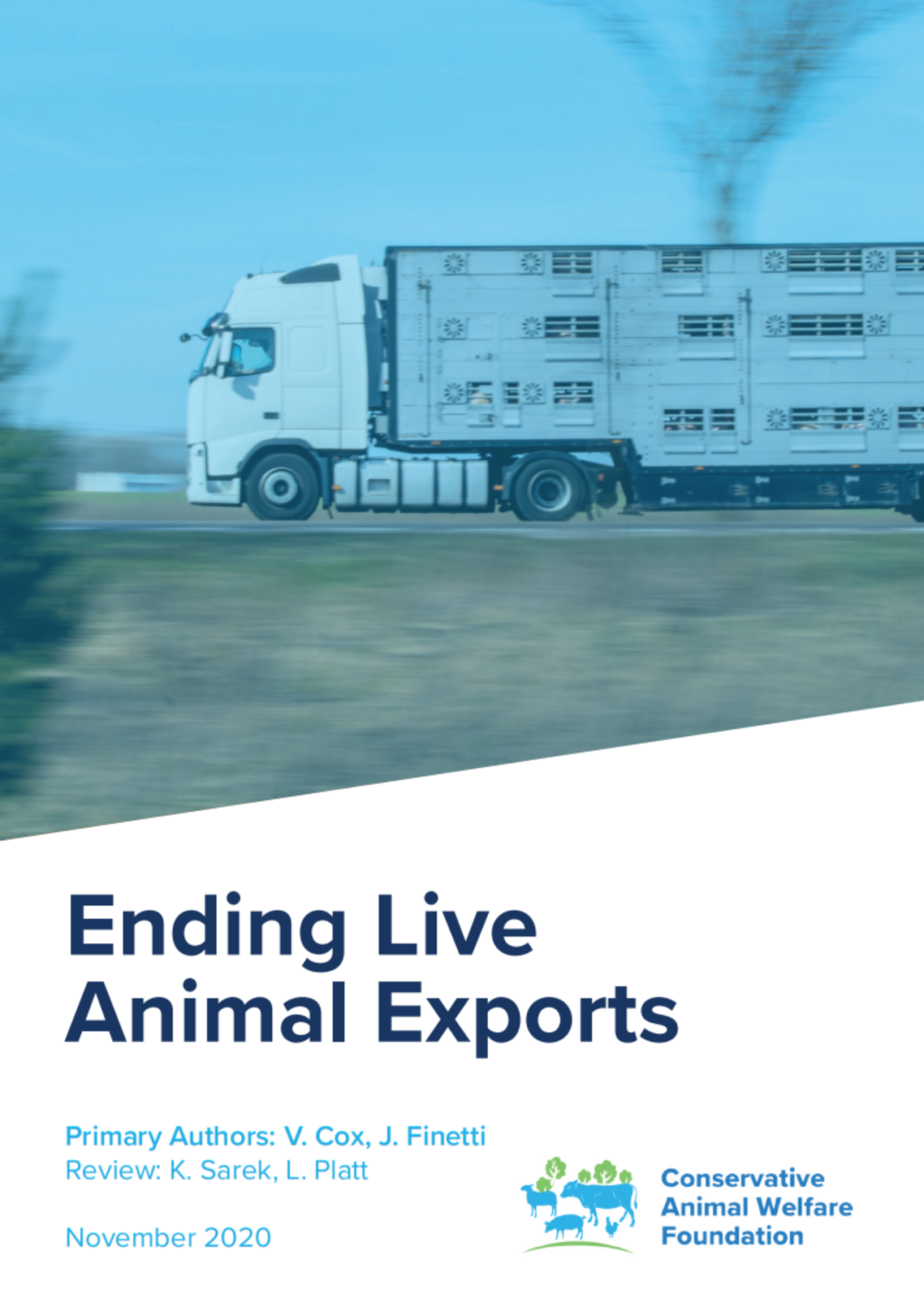 FAWC: Opinion on the Welfare of Animals during Transport 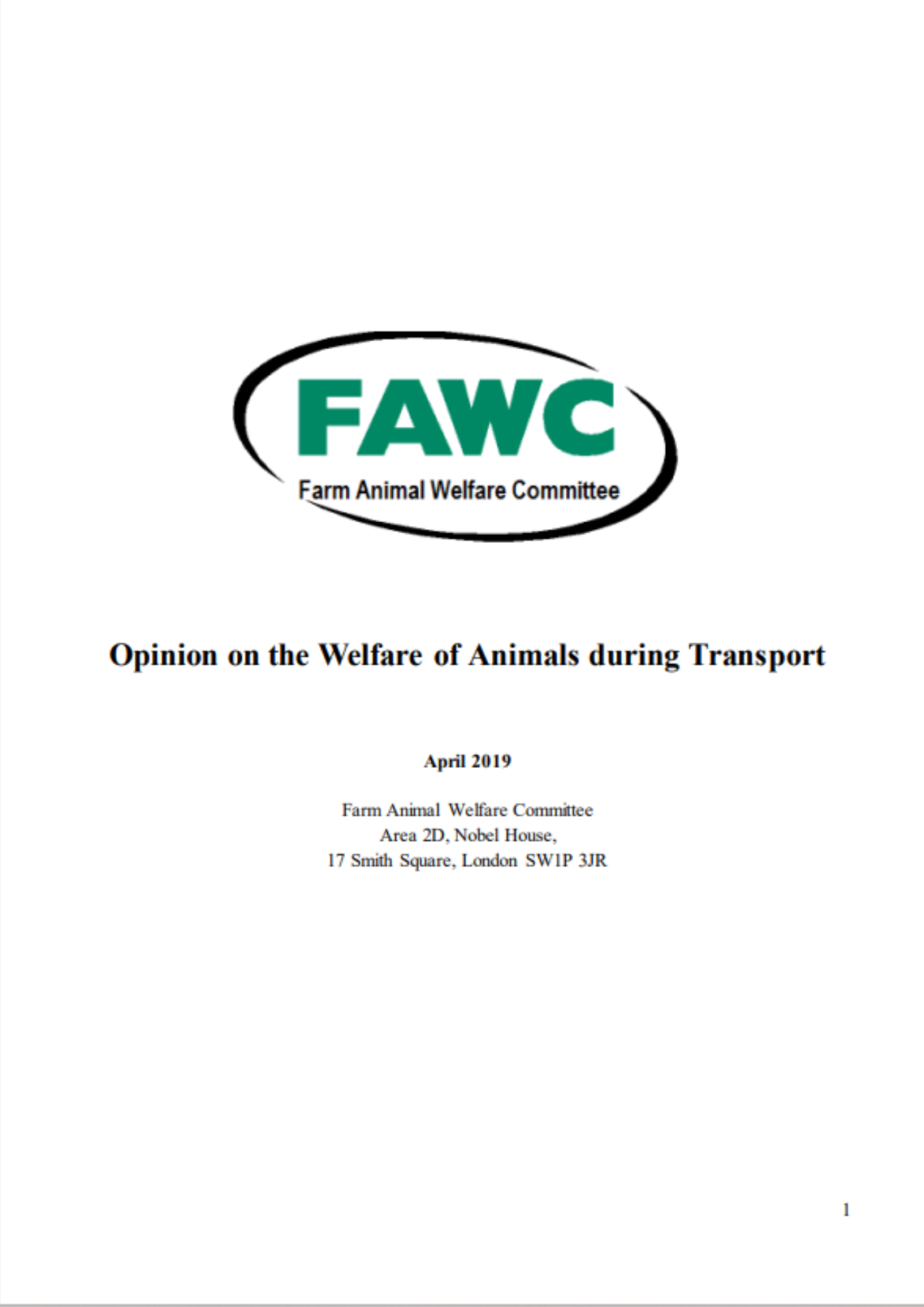 This Monday 5th December Conservative MP Elliot Colburn will be leading a Westminster Hall debate relating to the petition titled: ‘Find the time to take the Kept Animals Bill through Parliament and make it law’. 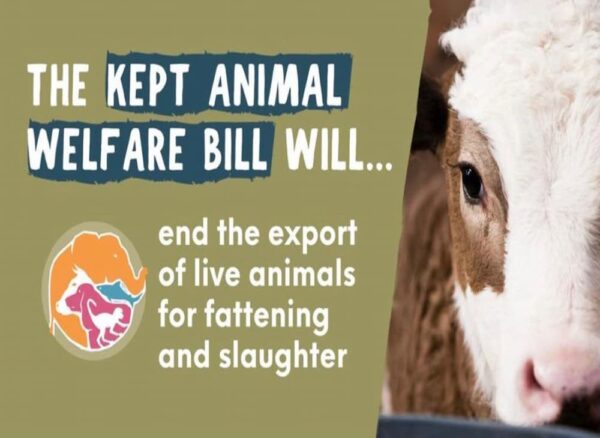 The Animal Welfare (Kept Animals) Bill was first introduced in the House of Commons on 21st June 2021 and forms a key part of the Government’s Action Plan for Animal Welfare.