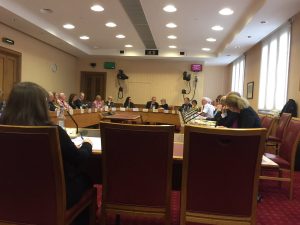 Conservative Animal Welfare Foundation attended the round table discussion event held by the House of Lords EU Energy and Environment Sub- Committee on the implications of Brexit on farm animal welfare.
The round table consisted of industry leaders, academics and animal welfare orgsnisations- the RSPCA and Compassion in World Farming.

The participants explored topics including:

What are the critical issues that must be addressed in terms of farm animal welfare regulations, compliance and enforcement to deliver these intentions?
Which monitoring bodies and mechanisms of enforcement need to be expanded or created post-Brexit?
What action must the Government take to ensure that the UK remains a world leader in farm animal welfare after Brexit?
To what extent might trade pose a risk or an opportunity for UK farm animal welfare after Brexit? What tools could or should the UK government employ to ensure that any risks are mitigated (e.g. labelling of products, restrictions on imports, trade agreements)?
Will current levels of inspections be adequate to maintain consumer confidence?
The discussion started at 10.00am on Wednesday 5 April and was held in Committee Room 4A of the House of Lords.

Mr Stevenson said: “Improvements would best be made on a voluntary basis – though sometimes regulation may be needed.
“Improvements should be supported by post-CAP support payments and by public procurement.”

A similar view was given by Joe Bayley, head of agriculture at RSCPA Assured.
The organisation was looking at farm support payments to promote animal welfare – with a higher tier funding producers who delivered the highest standards.

NFU deputy president Minette Batters said the NFU supports the government’s ambition to maintain welfare standards. But the NFU had concerns for animal welfare if the UK left the EU and reverted to World Trade Organization rules.

This threatened to leave UK producers exposed to cheap food imports often produced to standards below those adhered to by British farmers – a concern also raised by Chris Mallon, director of the National Beef Association (NBA).

Conservative Animal Welfare Foundation submitted a response to the House of Lords EU Energy and Environment Sub- Committee short inquiry on the implications of Brexit on farm animal welfare.