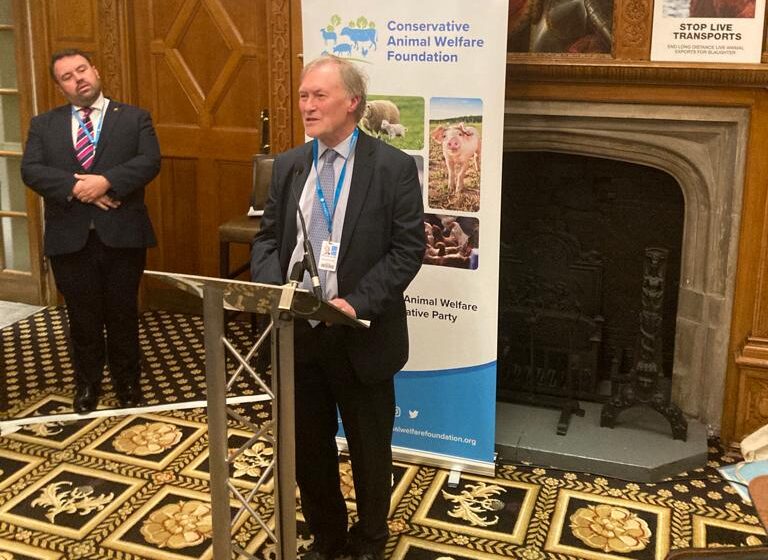 The reception will be hosted by Jane Stevenson MP who this year secured the Glue Traps (Prohibition) Act which bans the use of cruel glue traps. Other speakers include:

The reception will take place on Tuesday 4th October in the Concerto Room of the Hyatt Hotel, Birmingham, between 8:45pm and 10pm.

CAWF welcomes all Conservative Party Conference guests to attend this important reception paying tribute to Sir David Amess and all that he achieved in his long and distinguished career.

Lorraine Platt, Co-Founder of Conservative Animal Welfare Foundation, commented: “This year our World Animal Day reception will no doubt feel incomplete in Sir David’s absence. We remember our reception exactly a year ago when Sir David spoke powerfully on ending cages for laying hens and sows on British farms – just two of the many animal welfare causes he championed as an MP.

“Though we can never do justice to the decades of work Sir David gave to his constituents, campaigns, and colleagues, we look forward to paying tribute to our dear friend and all that he achieved for animals.

“We would like to thank Jane Stevenson for hosting this important reception, and our other MP speakers including our Patron Theresa Villiers, Education Minister Andrea Jenkyns, Anna Firth, and Mark Francois. We are also delighted to welcome world renowned explorer Sir Ranulph Fiennes.”