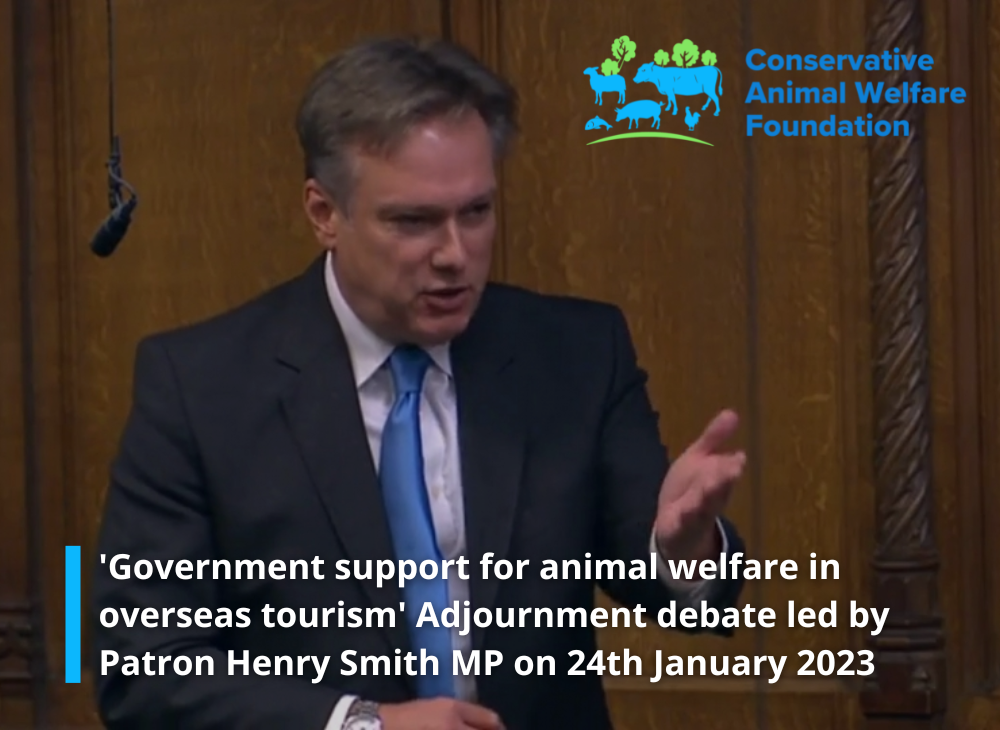 The Government has committed to taking action to end the UK’s role in advertising and selling such tourist activities. Defra’s Action Plan for Animal Welfare published in 2021 said: “Animals such as Asian elephants may be subjected to cruel and brutal training practices to ensure their obedience. We will legislate to ban the advertising and offering for sale here of specific, unacceptable practices abroad.”

During yesterday’s debate, Patron Henry Smith MP spoke on the  hundreds of thousands of wild animals who are exploited for entertainment in the global tourism industry. These activities can include tiger cubs made to pose for selfie photographs, elephant rides and swimming with dolphins experiences, as well as captive dolphin shows. He said: “There needs to be new legislation banning the promotion of holidays and tours that include exploitative animal encounters in their advertisements, helping to end the miserable abuse by making such unethical advertising illegal.”

Other MPs who contributed to the debate included Dr Lisa Cameron MP who highlighted the cross party support on this issue, and named CAWF Co-Founder Lorraine Platt. She said: “Does he agree that this is a cross-party issue, unlike many that we may discuss, and that we can reach out across the political divide and come together with the public, who overwhelmingly support having the best animal welfare conditions in the UK and internationally? Does he also agree that advocates such as Lorraine Platt, who leads the Conservative Animal Welfare Foundation, and others do fantastic work in this space to ensure that we all work together cross-party to take this forward?”

This debate came ahead of the scheduled Second Reading of the Animals (Low-Welfare Activities Abroad) Bill on Friday 3rd February, which received its First Reading in June 2022 led by Conservative MP Angela Richardson.

Conservative Animal Welfare Foundation fully supports the Bill to ban the sale and advertising of unacceptable and cruel tourist practices abroad. CAWF Co-Founder Lorraine Platt has been a Director of Save The Asian Elephants (STAE) since February 2018.

You can read the full debate here.

Lorraine Platt, Co-Founder of Conservative Animal Welfare Foundation and Director of Save The Asian Elephants, commented: “We welcome this important debate raising awareness of the horrific practices which take place to accommodate tourist activities overseas. Elephants in particular are subject to cruel beatings to create fear and submission, and many die during this process. It is critical the UK plays no role in the promotion of the tourist activities associated with these practices.

“We would like to thank our Patron Henry Smith MP for leading this debate, as well as other MPs including Angela Richardson, Kerry McCarthy and Dr Lisa Cameron who made supportive contributions.”

You can read more about the petition delivery in the Daily Express here.