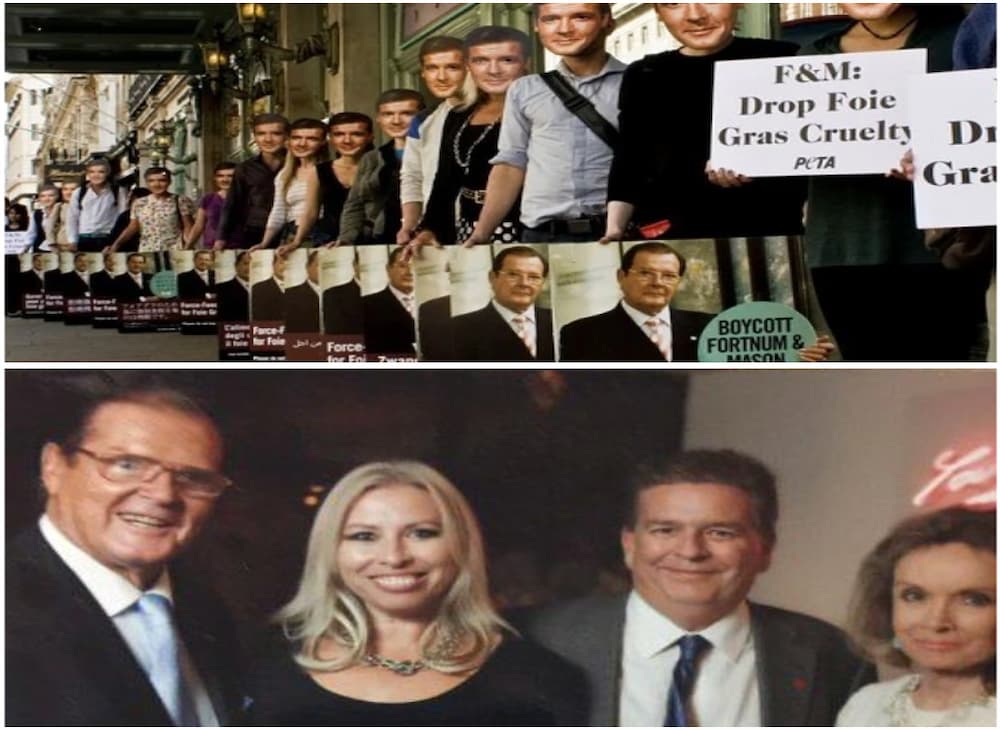 "Lorraine Platt, the co-founder of the Conservative Animal Welfare Foundation, the influential network of which Prime Minister's fiancée Carrie Symonds is a member has been part of the protests." Telegraph Feb 10th 2021

“For over a decade, Fortnum & Mason has stood against the pressure to stop selling “torture in a tin” as it remained one of the last great department stores to sell foie gras.

It has long been a contentious issue between those who see the product as a traditional luxury, and those who balk at the idea of force-feeding a duck or goose for human consumption. But now, the landmark London shop has given into campaigners and is phasing it out.

Celebrities including the late Sir Roger Moore, Twiggy, Joanna Lumley, Bill Oddie and Ricky Gervais have for years been part of a campaign by People for the Ethical Treatment of Animals (Peta) to picket the shop.

Lady Moore, widow of Sir Roger Moore, said the James Bond star would have been “delighted” that his campaign finally bore fruit.

She said: “My late husband, Sir Roger Moore, was a staunch advocate for animal rights, and foie gras production was one of the many issues he took a stand against. For years, he joined Peta in urging Fortnum & Mason to stop selling this product of horrific cruelty. I know he would have been delighted to hear that the retailer has finally made the compassionate decision to remove foie gras from its shelves.”

Defra minister Lord Goldsmith has joined campaigners in the crusade against the goose liver product, and the government is now considering a ban on the product.

A spokesperson said: “The Government has made clear that the production of foie gras from ducks or geese using force feeding raises serious welfare concerns, and the practice is rightly banned in the UK.

“The Government is considering the further steps it could take in relation to foie gras.”

Fortnum & Mason confirmed to this newspaper that they have stopped buying in the product and are now selling off the rest of their stock. Once it runs out, foie gras will no longer be on the department store’s shelves.

A spokesperson said: “This decision was made last year as part of an ongoing focus on the way we do business.”

The last few tins are still being sold on its website, which reads: “Our foie gras is produced by just two farms carefully selected for their excellent welfare standards; smooth and creamy, it is the simplest way to transform a meal into a banquet.”

This has often been a contentious issue for department stores which wish to cater to their more well-heeled clientele without sparking mass protest by animal rights activists. Selfridges stopped selling foie gras in 2009 – but customers were so keen to get their hands on the luxury item that the butcher sold it “under the counter”. In 2012, he was caught and swiftly fired. Harrods still sells the product.

Fortnum & Mason previously maintained that it would not bow to pressure from activists, arguing  that demand for it was “very strong”. He and the store had “many thousands of customers” who wanted to buy “what is essentially a very traditional product”.

BBC presenter Chris Packham said: “The world is changing, every more rapidly, in its regard to the way we treat animals. They are not there for us, they and we are part of a world that should support them. And we are waking up not the fact that what was acceptable yesterday is no longer tolerable today. Hats off to Fortnums, this is a timely signal that time are changing, and for the poor abused geese in France, they will be changing for the better.”

Lorraine Platt, the co-founder of the Conservative Animal Welfare Network, the influential network of which Prime Minister’s fiancée Carrie Symonds is a member has been part of the protests.

She said: “I campaigned for Peta outside Fortnums just before we launched Conservative Animal Welfare Foundation to protest against the sale of foie gras in the store wearing a mask of Sir Roger Moore- who was leading the campaign for Peta back then. I was fortunate enough to be invited to a very private dinner with Sir Roger Moore and his family and had the opportunity to thank him face to face for all he was doing at the time to press Fortnums  to stop selling the grotesque product.”

Peta Vice President Mimi Bekhechi added: “From boardroom meetings to being force-fed outside the doors of the famous store by Steven Berkoff, our campaigning activities ran the gamut.

“Although it took far too long, we’re thrilled that the penny has finally dropped and Fortnum & Mason is joining the extensive list of iconic British institutions that reject this torture in a tin.”

To produce foie gras, ducks and geese are force-fed several times a day until their livers become diseased and swollen. By the end of their lives, many birds have trouble breathing because their enlarged livers compress their lungs, which is why the EU’s Scientific Committee on Animal Health and Animal Welfare recommends “that force-feeding of ducks and geese should stop and this could be best achieved by the prohibition of the production, importation, distribution and sale of foie gras.””