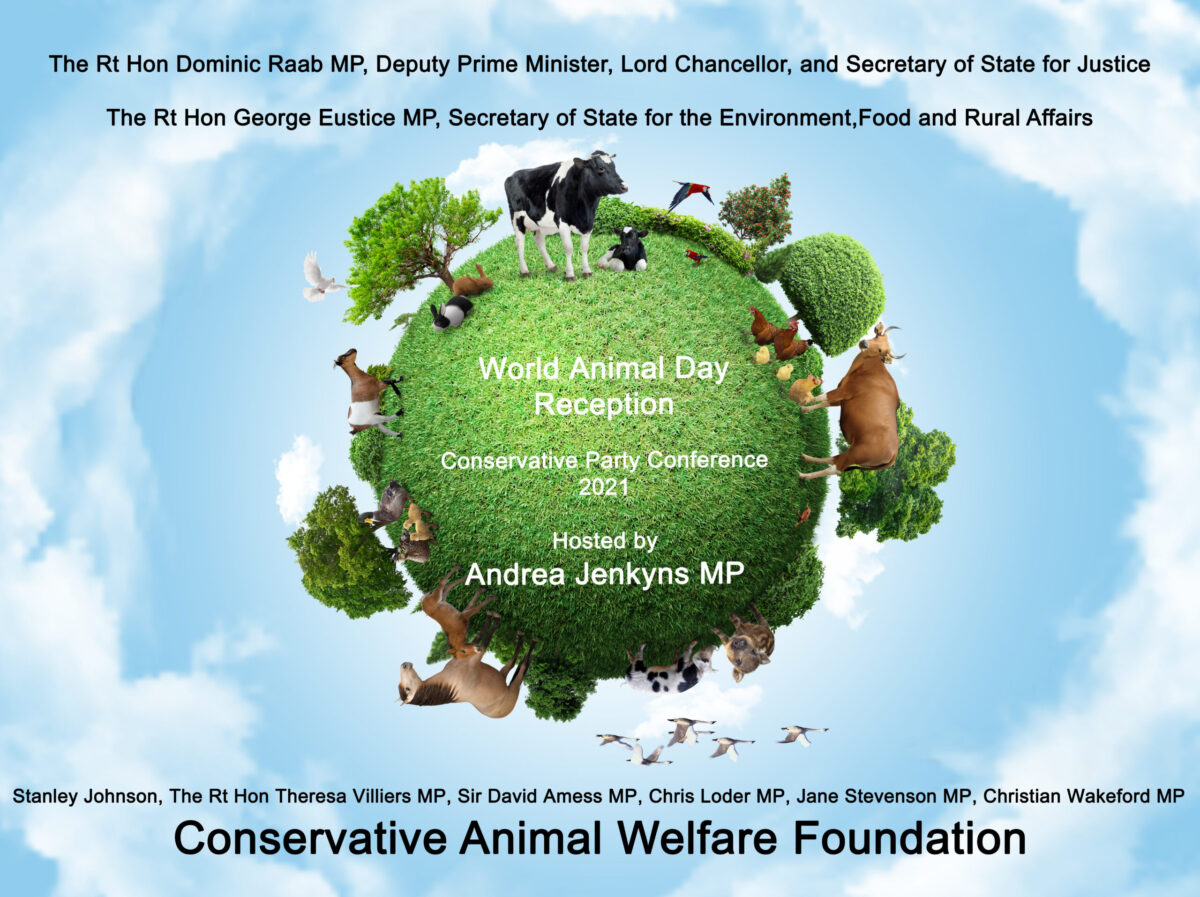 On Monday 4 October the Conservative Animal Welfare Foundation (CAWF) will join thousands of organisations and individuals around the globe in celebrating World Animal Day. This year the CAWF is delighted to be leading a reception at The Conservative Party Conference in Manchester, bringing together Ministers, MPs, Patrons, and guests.

On Monday 4 October the Conservative Animal Welfare Foundation (CAWF) will join thousands of organisations and individuals around the globe in celebrating World Animal Day. This year the CAWF is delighted to be leading a reception at The Conservative Party Conference in Manchester, bringing together Ministers, MPs, Patrons, and guests.

The reception, hosted by Andrea Jenkyns MP, will be held at the Lancaster Suite in the Midland Hotel, Manchester, from 18:00-19:30. Speakers will include:

The reception will celebrate the Government’s Action Plan for Animal Welfare, a wide-reaching and ambitious plan which sets out the Government’s current and future work on animal welfare and conservation. The UK’s exit from the EU affords the opportunity to further advance domestic animal welfare standards, to act as a dynamic leader on the world stage, and to introduce measures and protections which are right in principle. Speakers will touch on a range of issues, from ending live exports for slaughter and fattening, to ending our role in the global fur trade.

About The Action Plan for Animal Welfare

Key legislation in the Action Plan includes the Animal Welfare (Sentience) Bill, the Kept Animals Bill, and the Animals Abroad Bill. It consists of several commitments to advance the welfare of farm animals, wild animals, as well as companion and sporting animals, including:

The health and welfare of animals is intertwined with the health of our planet. To this end the CAWF also welcomes the Government’s 25-year Environment Plan, the landmark Environment Bill, and the COP26 summit which will be hosted this year in Glasgow. COVID-19 has put a spotlight on global health and biosecurity, demonstrating the delicate balance between the human and animal kingdoms.

More information on the Government’s Action Plan for Animal Welfare can be found here. You can read more about the Environment Bill here, the 25-year Environmental Plan here, and COP26 here.

October 4 is the Feast Day of St Francis of Assisi, the patron saint of animals. World Animal Day has become a global celebration of all animals and the people who love and respect them. It is known on every continent and celebrated in different ways across many countries, regardless of religious or political views.

The Conservative Animal Welfare Foundation is proud to support World Animal Day by bringing government leaders, campaigners, and MPs together to raise awareness of the billions of animals on factory farms around the world and the impact this has on animal welfare, the environment, and public health.

More information about World Animal Day can be found here.