Secretary of State delivers speech on animal welfare and the environment at our parliamentary reception with Conservative Environment Network, 5th December 2017 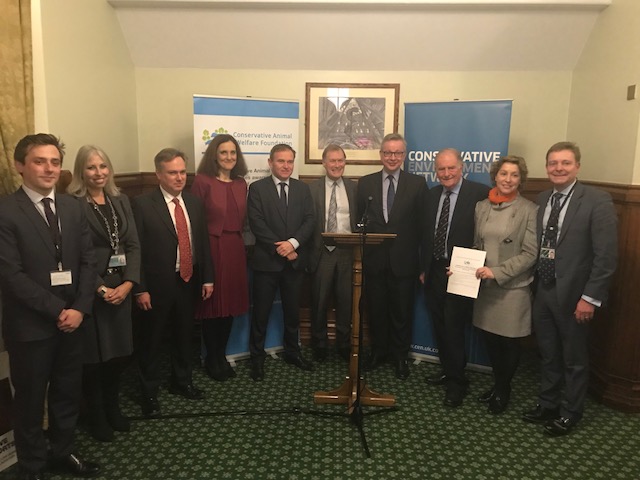 The Secretary of State, Michael Gove supported calls from the Conservative Animal Welfare Foundation and Conservative Environment Network to improve farm animal welfare and to protect the environment as the UK leaves the European Union. He joined CAWF and CEN as they convened a broad group of Conservative MPs to push for higher farm animal welfare and environmental standards. Both organisations are clear that there whilst there are clearly risks to be mitigated – there are also huge opportunities to be had for forging new world leading approaches to policy.

The joint event welcomed the recent animal welfare and environmental protection announcements to ban micro beads which harm marine life, backing for the ban on bee killing pesticides, the introduction of mandatory CCTV in all slaughterhouses, the increased sentencing for animal cruelty, the ban on the UK ivory sales trade, the Blue Belt extended to protect rare seabirds and more.

Longstanding animal welfare campaigner, and patron of CAWF, Sir Roger Gale MP hosted the groups on Tuesday, 5 December 2017 at 4-6pm at the House of Commons at a reception attended by Ministers, MPs advisers and representatives from across the environmental and animal welfare sectors including the President of the BVA-  the British Veterinary Association, FAWC- the Farm Animal Welfare Council,  APGAW- the All Party Group for Animal Welfare, the PMA, the RSPCA, Compassion in World Farming, The International Fund For Animal Welfare, Farmwel,  FAI Farms and LINK.

“This Government is committed to the very highest animal welfare and environmental standards.

We have already proposed primary legislation to increase maximum sentences for animal cruelty from six months to five years, and the creation of a new statutory, independent body to uphold environmental standards. Our recent ban on microbeads, which harm marine animals has been hailed as the strongest in the world.

Once we have left the EU there is even more we could do. We hope to crack down on puppy smuggling and are looking at ways to restrict the live exports of animal for slaughter.”

Sir Roger Gale MP a patron of CAWF who opened the meeting added:

“This is the most impressive statement that I have in 34 years in the House of Commons heard from any Minister of any Government in support of animal welfare. It was amazing.”

“We are a nation of animals lovers and as we move towards Christmas, as legislators, do something to improve animal welfare, as animals always appreciate everything we do for them. “

Lorraine Platt, Co-Founder of Conservative Animal Welfare Foundation welcomed the progress being made and said:

“We are delighted that the Secretary of State joined us at our joint reception. We applaud the Minister’s recent announcements to protect the environment and important measures to advance animal welfare. We look forward to further positive progress and to supporting the Minister in his work on this. We are pleased that many of the proposals that we, with our patron Sir Roger Gale MP, presented to No 10 in our animal welfare briefings in January 2017 (Conservative Animal Welfare food and Farming Charter and Brexit Opportunities for Animal Welfare ) have now be announced as proposed legislation. This includes mandatory CCTV in all slaughter houses, increased animal cruelty sentencing and a ban on the UK ivory sales trade. We hope to see a ban on the export of live animals for slaughter and more. ”

Mark Holmes, the Interim Director of CEN welcomed the energy for action saying:

“It’s so encouraging that there is such a groundswell of support amongst the Conservative MPs for higher environmental standards as the UK leaves the European Union. The Secretary of State has got off to a flying start at DEFRA, and his words today are welcome, but there is always room to do more. Conservatives need to build on the environmental legacy of Margaret Thatcher, remembering that “no generation has a freehold on this earth. All we have is a life tenancy – with a full repairing lease”

The Conservative Animal Welfare Foundation(CAWF) campaigns to end the suffering in live animal exports, cages for hens, confined pig farrowing crates and for the introduction of method of production labelling. It has campaigned for the introduction of mandatory CCTV in all slaughterhouses. It raises awareness of the impact of industrial livestock farming on animal welfare, the environment and public health.
www.conservativeanimalwelfarefoundation.org