We talk on our campaign to ban live animal exports and more at the Farmwel event hosted by Theresa Villiers MP, November 28th 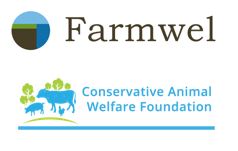 There were some good discussions from speakers who included Ffinlo Costain, Marisa Heath of the All Party Group for Animal Welfare, Ruth Layton of FAI Farms and Vicki Hird and her colleague at Sustain. Debate considered the Agriculture White Paper and bill and critically important issues.

Our Co-Founder Lorraine Platt talked on the opportunities that Brexit presents to champion a new way of farming and to reward farmers who adopt higher animal welfare systems and enhance the environment.

Topics for presentated and discussed:

Empowering the private sector
The role of retailers and assurance schemes

Nudging the invisible hand
The role of citizens and the market

“Brexit provides us with an opportunity to take back control of agricultural land use and food policy, and to create a new model of farming excellence
There are opportunities to develop a new vision and farm in ways that restore natural resources, soils, water, biodiversity and then maintain them in good shape for future generations. We can provide decent livelihoods for farmers and ensure that farming and our diets contributes to the Paris targets of limiting temperature increases. We should reduce farm antibiotic use. The use of antibiotics in farming contributes to the transfer of resistant bacteria to people.

We must achieve high standards of animal welfare and move away from industrial livestock production as this is a key driver of the detrimental impact of today’s farming on the environment, public health, antibiotic resistance and animal welfare. Routine behavioral mutilations should be quickly phased out to protect both farm animals and the British brand. Good management in extensive indoor and outdoor farm systems eliminate the need for routine behavioral mutilations, such as piglet tail docking and tooth clipping.

It is vital that UK farmers are not undermined by lower welfare imports. The UK must insist on the inclusion in new trade agreements of a clause requiring imports to meet UK animal welfare standards on meat and processed products. We have the opportunity to promote higher farm animal standards by diverting money from the old CAP subsidy system into schemes that reward farmers that produce under higher welfare assurance schemes or farm to meaningful higher welfare standards. With high land and labour costs, British farming cannot compete on cost alone. Quality must become part of Britain’s post Brexit brand. Good animal welfare and pasture- based farming are key components of quality.

We call for a move away from intensive farming to free range systems and halt the zero-grazing of dairy cows. We believe the Government should provide incentives to farmers to keep cows in pasture-based systems. We call for the phase out of enriched cages for laying hens. The UK must require the replacement of pig farrowing crates with free farrowing systems.

The introduction of method of production labelling of meat and dairy products would indicate the farming method employed. We know this can have a significant impact upon consumer behavior just as compulsory labelling on egg provenance allowed consumers to know how their eggs were produced and the sales of free range eggs increased and now account for around 52% of eggs produced in the UK.

Leaving the EU provides opportunities to go further where there is existing legislation. For example, prohibiting the slaughter of farm animals without stunning is already prohibited in three other EU countries. We support the British Veterinary Association position on non- stun slaughter.

We urge for better public procurement that only uses meat, milk and eggs that have been produced humanely and sustainably in the UK. We encourage less and better meat and dairy consumption as this would give us healthier lives, reduce greenhouse gas emissions, help restore the environment and feed the growing world population. Reduced consumption of meat and dairy products would enable sufficient animals to be farmed using higher welfare standards. Simple interventions such as mandatory origin labelling of meat and dairy products (country, and method of production) help to nudge sustainable choices, and create a level playing field for added-value producers.

These labels ensure that consumers can easily compare like-for-like products as they shop. Evidence shows that over half of consumers are motivated to pay more for products from higher welfare and more environmentally sustainable farm systems when these labels are in place. Additional transparency means that consumers can play their role as citizens and help to drive and support high quality British food.

We are pleased that there will now be mandatory CCTV in all slaughterhouses and have pressed for this in our meetings with Ministers since the launch of Conservative Animal Welfare Foundation.
Furthermore, once the UK is no longer bound by EU rules, it will be free to ban live exports. We call for a ban on the live export of animals for slaughter and fattening to come into force as soon as the UK leaves the EU.

It is a priority that there is not a reduction in animal welfare standards at the expense of a drive for new profitable economic trade deals. Welfare quality is greatly valued by British citizens and consumers. Special Eurobarometer 442, published in 2016, found that 98% of British people believe that protecting the welfare of farmed animals is very important. 76% said that welfare standards should be improved.

Conservative Animal Welfare Foundation recognizes the inevitable questions- what will Brexit mean for animal welfare and the importance of ensuring that laws protecting animals remain as tough- if not tougher- once the UK leaves the EU. Animal welfare is an increasing concern amongst the public, who frequently look to Government to take the lead in both maintaining and improving standards.”