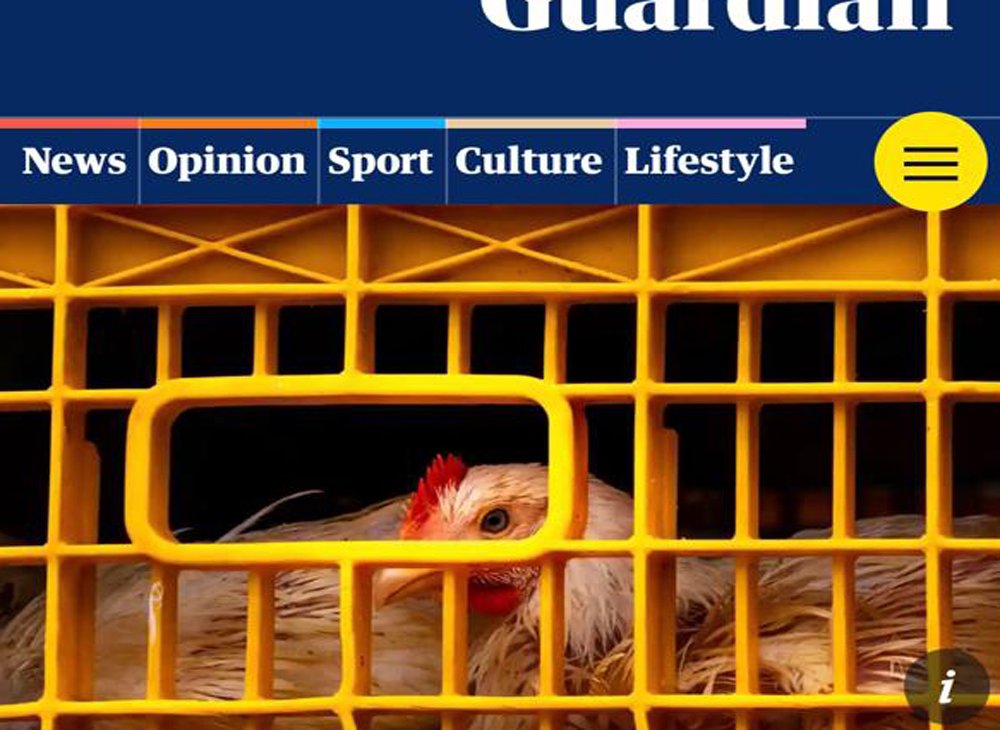 ‘Dying like flies’: A million chickens die on way from farm to abattoir each year

Chickens are “dying like flies” in their millions while being transported from farms to abattoirs because of poorly ventilated lorries, a whistleblower has told the Guardian.

“This is an appalling animal welfare crisis. One million animals dying while being transported from farms to abattoirs in England and Wales because of poorly ventilated transporter lorries is grotesque and unacceptable.
This massive scale of deep suffering of live sentient animals in transport must end.
We urge for Defra’s ‘ Improvements to animal welfare in transport’ consultation proposals to be acted upon as soon as possible to help lessen animal suffering. These include establishing maximum journey times, restricting journeys outside defined temperature conditions, unless the transporters are thermoregulated and increasing head height and space allowances.”

The article from the Guardian:

Chickens are “dying like flies” in their millions while being transported from farms to abattoirs because of poorly ventilated lorries, a whistleblower has told the Guardian.

Around one million chickens are dead on arrival at slaughterhouses in England and Wales every year, according to data collected by the Food Standards Agency (FSA) and analysed by the Bureau of Investigative Journalism and the Guardian.

Although the number of deaths in transit is just a fraction of the one billion birds slaughtered every year in the UK, the government said this week that the figures were “worrying” and reducing deaths was a driving force behind its new proposals to restrict the transport of live animals. A consultation on the issue closed this week.

Speaking anonymously, a government vet who works at poultry slaughterhouses in the UK said birds were being denied water and held on lorries without any temperature control.

“In the summer months they can be sat in the cages with temperatures getting to 40C in some parts of the truck. They would be panting and die from heat stress in a pretty rough way. In the winter, they are being taken out of temperature-controlled sheds where they have been kept at 21C and can quickly get cold stress from the sudden temperature drop, especially if transported in the middle of the night.Cattle stranded at sea ‘face immediate slaughter’ if ship docks in Spain, says managerRead more

“There’s no excuse for it except the priorities of those involved to maximise the through flow of birds and financial returns.”

The government proposals include limiting the ambient temperatures in which poultry journeys could be conducted, unless the vehicle is able to mechanically regulate the internal temperature.

But the chicken industry has said it “totally opposed” any proposals to force it to use vehicles fitted with the right ventilation and heating.

Retrofitting vehicles would be an “extraordinary additional cost when there is no guarantee that any changes will deliver better welfare for the birds being transported”, said the British Poultry Council (BPC) in its response to the consultation.

The BPC said Finland and Norway already used vehicles that can regulate temperatures, yet neither had lower mortality rates for birds during transport.

Birds are transported from farm to slaughter sites around the UK in plastic module trays stacked on top of each other, with around 20 birds held in each crate in cramped conditions.

Regulations on the transport of animals allow birds to travel for up to 12 hours without access to food or water. Current regulations do not provide legal powers to ban journeys based on external temperature.

The vet whistleblower said: “There is no air conditioning, just wind from the movement of the lorry. If they are stuck in traffic or have to stop the birds will die like flies in those conditions.” He said that the FSA figures on birds recorded as dead on arrival were likely to be underestimated. “The vet will only see what he or she can in an extremely busy plant.”

The vet said water should be available to all chickens on lorries.

Environment secretary, George Eustice, told reporters this week he was “concerned” about the high numbers of bird deaths. Studies cited by the government in its consultation have said the number of deaths could be significantly higher than those collected by the FSA.

“In terms of journey times and the requirement for ventilation, the issue we were most concerned about, and I do think is something where action is needed, is on some of the poultry sectors, in particular laying hens, where you get depopulation at the end of their useful life,” he said.

“There were some quite worrying signs and statistics that you were getting high mortality at arrival at the abattoir and I do not think any of us can feel comfortable about that.”

Moy Park, which supplies most leading UK retailers with chicken, was fined in 2017 after more than 500 birds were found dead on one of its lorries when it arrived at a Lincolnshire slaughterhouse. A spokesperson for the company said it had introduced “appropriate seasonal measures to support air circulation including removing curtains on lorries during summer months”.

A BPC spokesperson said: “We welcome the discussion around Defra’s consultation on welfare in transport, but unfortunately the consultation is largely based on out-of-date studies – one nearly 30 years old – that do not reflect modern practices. Our own figures show we are already far ahead of the proposals being put forward by Defra.”