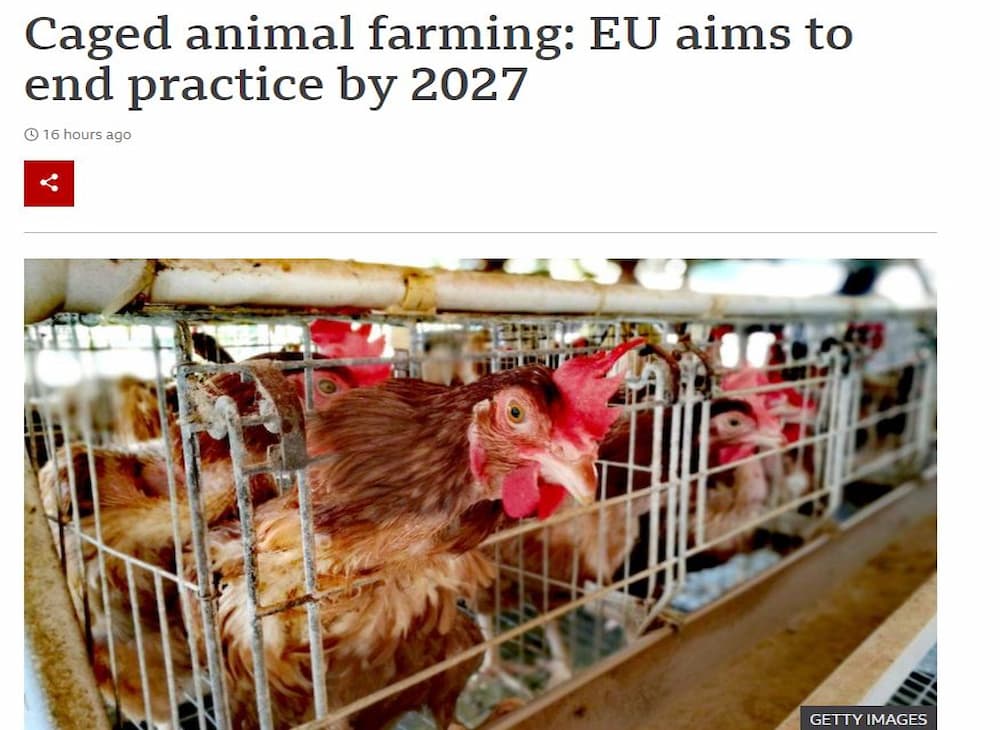 The European Commission has said it will work towards new laws to phase out caged animal farming across the bloc.

The European Commission has said it will work towards new laws to phase out caged animal farming across the bloc.

It comes after a petition demanding an end to the controversial system collected more than 1.4 million names.

Rabbits, young hens, quails, ducks and geese would be affected by the changes.

“Animals are sentient beings and we have a moral, societal responsibility to ensure that on-farm conditions for animals reflect this,” EU health commissioner Stella Kyriakides said.

The new legislation will be proposed by 2023 and the changes would be gradually phased in by 2027.

Laying hens, sows and calves are already covered by EU cage rules, although hens are currently allowed to be housed in “furnished” cage systems. These are more spacious than tightly-packed battery cages, which were banned across the EU in 2012, however welfare investigators found farms in several EU countries still using them in 2015.

Can captive animals ever truly return to the wild?

The commission’s announcement comes a few weeks after the European Parliament, which is elected by EU citizens, also voted to support the ban following the End the Cage Age petition.

The parliament said there were “grave concerns” about how some animals were housed, with some not even able to stand straight, stretch or turn around.

The EU has some of the highest animal welfare standards in the world. However, according to a report by End the Cage Age, 94% of its farmed rabbits are currently caged as are 49% of its hens and 85% of its sows.

There is also a call for legislation to ban force-feeding of ducks and geese to make the French delicacy foie gras.

EU countries are already showing support for the changes. Germany has said it will unilaterally ban caged hens by 2025, with just under 6% of its current hen population living in cages, according to the Albert Schweitzer Foundation.

The Czech Republic has also pledged to ban caged hens, while Austria and Luxembourg have banned them entirely.

The changes would be determined species by species, and encourage alternatives to caged farming for each animal’s specific needs.

Farmers will be supported through government subsidies so they can upgrade their equipment and receive up-to-date training.

All 27 member states of the EU, plus the European parliament, must agree to the legislation for it to pass, and then individual countries would be responsible for enforcing the new rules.