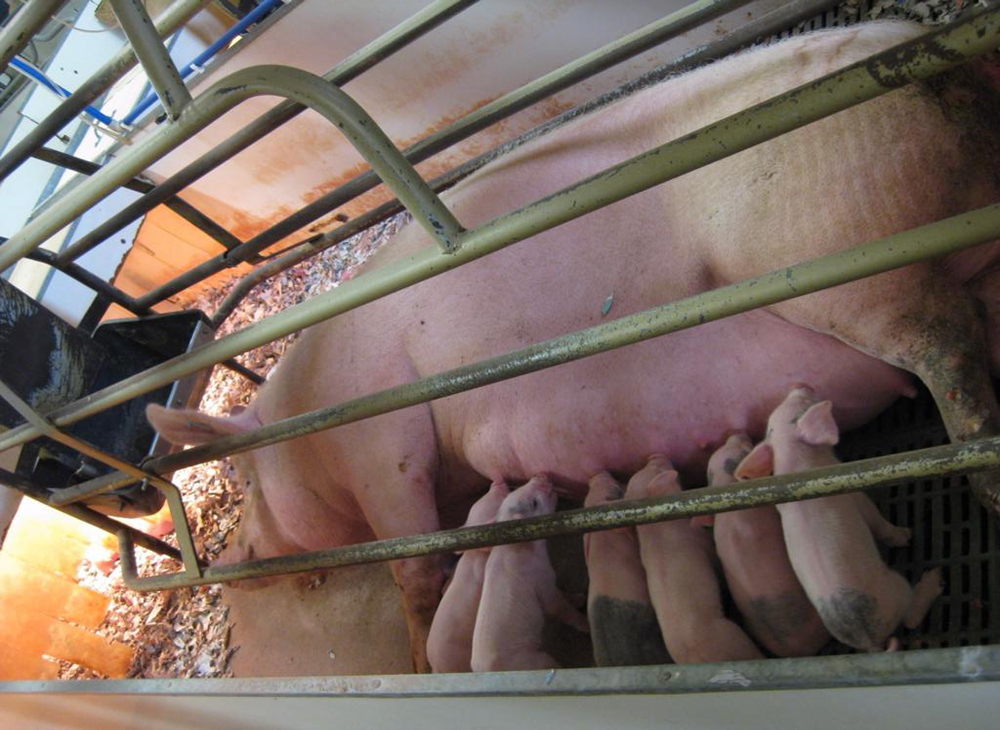 "It gives me great pleasure to present the Pig Husbandry (Farrowing) Bill. The aim of the Bill is to prohibit the cruel and unnatural use of farrowing crates."

That leave be given to bring in a Bill to prohibit the use of farrowing crates in pig farming; and for connected purposes.

I am delighted that, because we have these hybrid proceedings, a number of colleagues appear to be present. They may not all be unanimous in support for the Bill, but my constituency neighbour, my right hon. Friend the Member for Rayleigh and Wickford (Mr Francois), certainly is.

Pigs happen to be my wife’s favourite animals, and she has never suggested that she married one—in case anyone was thinking that.

It gives me great pleasure to present the Pig Husbandry (Farrowing) Bill. The aim of the Bill is to prohibit the cruel and unnatural use of farrowing crates. Just over 50% of sows are placed in these crates a few days before giving birth; it is called farrowing.

They are kept there until the piglets are weaned at three to four weeks of age. Sows are, therefore, often kept in these crates for nine to 10 weeks a year, and, in some cases, for longer. The crates are so narrow that the sow cannot turn around.

Almost exactly 30 years ago, on 21 January 1991, Sir Richard Body—one of my predecessors representing Basildon—introduced a private Member’s Bill that sought to ban the use of sow stalls, which were used to confine sows during their pregnancy. A few months later in April, the then Ministry of Agriculture adopted his Bill and banned sow stalls from 1999. That led to a European Union-wide partial ban that came into effect in 2013.

It is with similar intentions that I introduce this Bill. I hope the Government will confirm to me that they will either adopt the Bill or take steps to bring forward their own regulations—I have no vanity on this issue; I just want action on it—and that we will have the same end result: a ban on the use of farrowing crates in England.

In the 1990s, we led the way in developing legislation to enhance the welfare of pigs. That led to substantial improvements that were copied throughout our continent. Yet today, 30 years on, we still permit the use of farrowing crates for sows. Unfortunately, we now find ourselves falling behind nations where laws are either in place or due to come into effect to end the use of farrowing crates altogether or to limit their use to just a few days around farrowing. Switzerland, Sweden, Norway, Austria and, most relevant of all in the light of it being a major pig farming nation, Germany have all enacted such legislation.

As a patron of the wonderful Conservative Animal Welfare Foundation, I must thank Lorraine Platt for her invaluable work on advancing animal welfare and animal rights. My goodness, my party has come a long way since I was first elected, together with my right hon. Friend the Member for Gainsborough (Sir Edward Leigh), who takes a different view on this subject. How we have altered our views on animal welfare issues. The foundation’s report details how, despite there being over 200,000 sows confined in farrowing crates each year, the scientific evidence is being ignored and a ban on these crates will have a positive effect on sow welfare.

While confined in farrowing crates, these sensitive and — this is not always understood — intelligent animals are unable to express many of their natural behaviours. How many people realise that they actually make a nest? That is their natural instinct. A recent study found that these sentient beings are intelligent enough even to use a computer joystick to control a curser on a screen to earn a treat. The crates result in the sow being forced to give birth in a tiny space and then nurse their young through bars. The space in the crate is so restricted that all the sows can do is stand up and lie down until their piglets are weaned. Confined in these crates, sows bite and chew the bars, and scrape at the floor in frustration, only to endure painful wounds and sores.

A range of free farrowing pens which provide more space for sows has been developed, including by innovative British engineers, scientists and farmers. We often hear the industry argue that farrowing crates are needed to protect the piglets from being crushed—I am probably second-guessing my right hon. Friend’s speech against the Bill—yet scientific research shows that in well designed and well managed free farrowing pens piglet mortality can be as low or even lower than in farrowing crates. Not only that, but they have been shown to improve productivity and provide many benefits for sow welfare. Forty per cent. of the United Kingdom’s sows are reared in these systems. Calculations based on figures from the Agriculture and Horticulture Development Board show that piglet mortality has been lower in outdoor systems than in indoor systems in 19 of the last 20 years. This is a great opportunity to improve the welfare of British sows, enhance our country’s reputation for advancing animal welfare and support the ingenuity of British developers.

The Department for Environment, Food and Rural Affairs recently published its agricultural transition plan, which recognises that the future farm subsidies scheme:

“could relate to improving animal welfare in relation to confinement (e.g. the use of cages and crates)”.

That is very much welcome. However, it must be noted that legislation is needed to make these improvements to pig welfare mandatory. Payments to help farmers reach the required standard of animal welfare would, I am sure, speed the process up considerably.

The Bill I am presenting today foresees that the use of farrowing crates would be prohibited from 2027. This is ample time to allow farmers using these systems to phase them out and take advantage of the Government’s new agricultural support scheme for financial assistance in replacing crates with free farrowing systems.

In 2019, the wonderful organisation Compassion in World Farming led a coalition of United Kingdom animal welfare charities in securing over 107,000 signatures on petition No. 243448 calling for Britain to “End the Cage Age”. That petition was echoed by a European citizens’ initiative, which was supported by 170 animal welfare non-governmental organisations from across Europe and which secured 1.4 million signatures in support. I praise the work that Compassion in World Farming continues to do to promote animal welfare in this country, and especially in helping me to deliver this Bill.

The Prime Minister stated in this Chamber that:

We must not waste the monumental opportunity provided by Brexit to position Britain as a global leader on animal welfare. This Bill is a significant step in delivering on that promise.

As one of the driving forces behind, and one of the first to implement, a ban on sow stalls across the European Union, the United Kingdom should not now be falling behind European Union member states in the area of pig welfare. I hope that the Government will support this Bill to ensure that it becomes law and to fully recognise the unnecessary pain and suffering that sows experience in farrowing crates. I commend the measure to the House.