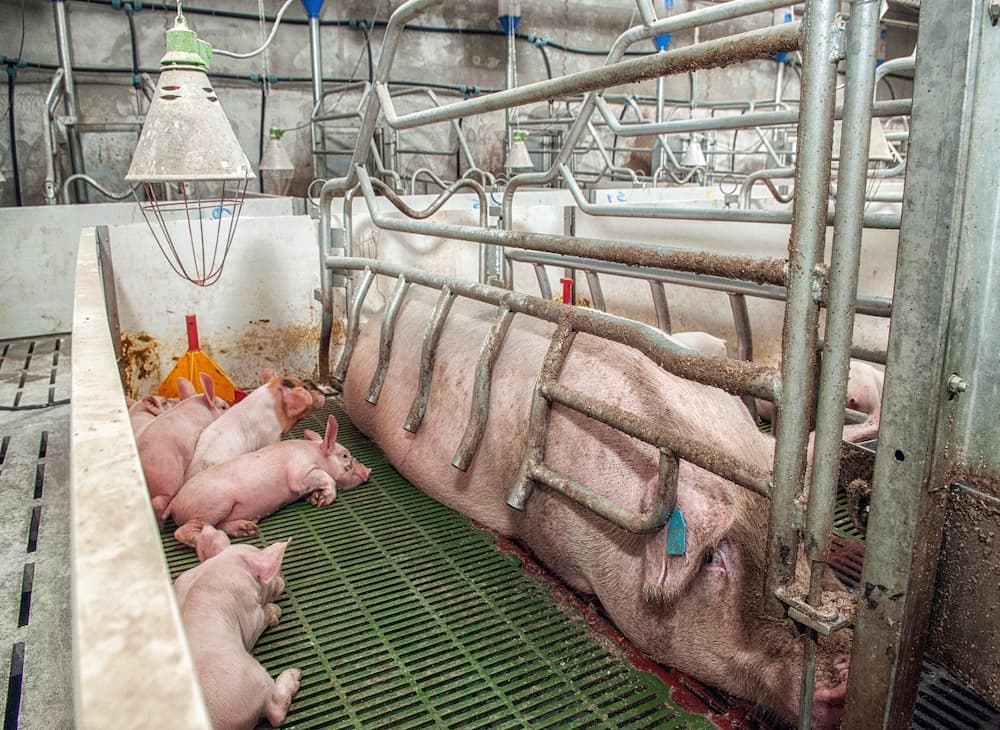 Matt Vickers MP opened the debate by highlighting the clear welfare issues associated with the use of cages for laying hens; including the inability for hens to perform natural behaviours such as dust bathing, foraging, and spreading their wings. He also spoke out against the use of pig farrowing crates and referenced the scientific evidence showing sow welfare is severely compromised in farrowing crates. He said: “Confined in those crates, sows bite and chew the bars and scrape at the floor in frustration. Many endure painful wounds and sores on their legs, feet and shoulders caused by slipping or lying on the hard slatted floors.”

CAWF Patrons Tracey Crouch MP and Sir Roger Gale MP both highlighted the need to ensure UK trade policy reflects our domestic animal welfare standards, with Sir Roger Gale commenting that Brexit means “we have the power to say that we will not allow into the United Kingdom a product that has been produced under circumstances that we would not permit here.” Tracey Crouch said that if the UK introduces a ban on cages for farmed animals, “we must ensure that we do not enable poor practice via imports.”

CAWF Patron Theresa Villiers MP spoke on the need for a clear timetable on legislating to end cages for laying hens and pig farrowing crates. She also highlighted the fact other countries like Switzerland and Germany have banned enriched cages for laying hens and agreed with previous contributions that our policy on imports must reflect the standards we legislate for domestically.

Defra Minister Victoria Prentis MP responded to the debate, setting out the animal welfare achievements under this Government including the Animal Welfare (Sentience) Act, the Animal Welfare (Sentencing) Act and the Animals (Penalty Notices) Act. She reiterated Defra’s commitment to the Animal Welfare (Kept Animals) Bill, and informed MPs that plans to publish a Consultation on ending cages for laying hens is “almost ready to go”. She also emphasised the need to move away from practices like beak trimming.

The Minister concluded by stating “the Government are committed to phasing out confinement systems and supporting the industry to do so, not least to underpin UK food security. However, we need to work carefully and sensitively with the pig and poultry industries, which are both struggling with some difficult input costs and other challenges at the moment.”

In addition, Conservative Animal Welfare Foundation recently published another report as part of the wider campaign on improving welfare conditions for laying hens, on the practice of beak trimming. This practice is most prevalent across industrialised farming systems where hens are kept in cages; it is a direct result of the intensification of poultry production and would not be necessary under less intense systems of production which allow hens sufficient space to move about.

CAWF is also campaigning to end pig farrowing crates. Around 60% of sows in the UK farrow indoors, with no space to stand up or turn around. Behavioural and physiological studies consistently demonstrate that sows experience much stress and suffering due to this close confinement, and often suffer from physical injuries. CAWF is calling for the UK to join countries like Norway, Sweden, and Switzerland, end the use of pig farrowing crates, and instead adopt alternative farrowing systems.

You can read the CAWF reports on ending cages for laying hens here, debeaking here, and pig farrowing crates here. The full transcript of yesterday’s debate is available here.

Lorraine Platt, Co-Founder of Conservative Animal Welfare Foundation, commented: “CAWF has long campaigned for higher farming welfare standards. This debate was an important opportunity to raise the plight of the millions of farmed animals reared in cages each year, such as laying hens and sows who are forced to breed in farrowing crates.

“We were particularly pleased to see contributions from our Patrons Sir Roger Gale MP, Tracey Crouch MP, and Theresa Villiers MP, who all expressed support for ending cages and ensuring any ban is accompanied by a strong trade policy which does not permit the import of products raised in conditions the UK does not condone.

“Thank you to Matt Vickers MP for leading this debate and the MPs who supported it; for drawing attention to the terrible suffering currently endured by many farmed animals across the UK confined to cages.”