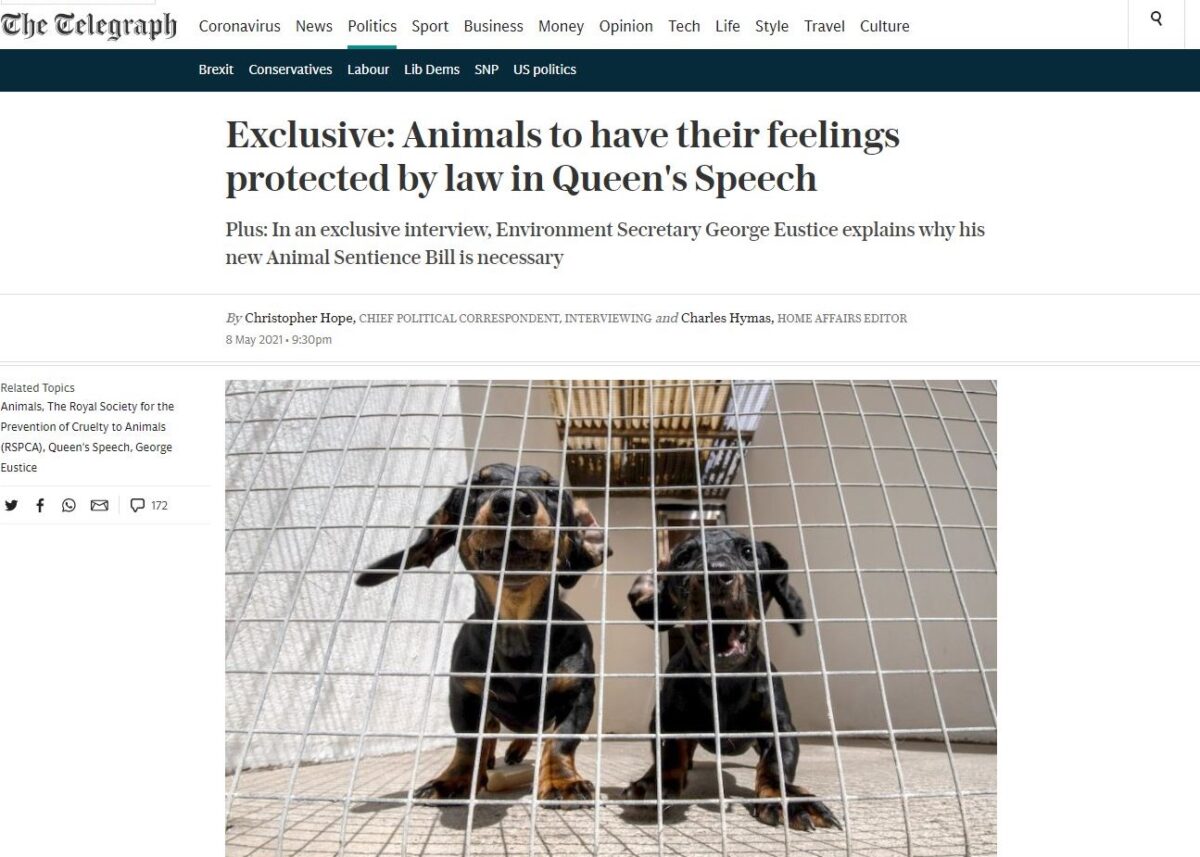 The Daily Telegraph: Animal Sentience to be Enshrined in UK Law

Exclusive: Animals to have their feelings protected by law in Queen’s Speech (telegraph.co.uk)

Animals with a backbone will have a legal right to feel happiness and suffering in a Government drive to raise welfare standards in Tuesday’s Queen’s Speech.

An Animal Sentience Bill will enshrine in law that animals are aware of their feelings and emotions, and can experience joy and pleasure, as well as pain and suffering.

“Sentience” will apply to “vertebrate animals – anything with a spinal cord”, Environment secretary George Eustice told The Telegraph in an exclusive interview below.

An existing committee of experts and civil servants in Defra will be tasked with ensuring Government’s policies take into account animal sentience.

Ministers were criticised in 2018 when the duty was not carried across into UK law from the European Union after Brexit.

The Government wants to make the UK a world leader in animal welfare and laws that protect animals form the centrepiece of this week’s Queen’s Speech.

As well as an Animal Sentience Bill, an Animals Abroad Bill will ban the import of trophies from animal hunting. A third measure – a Kept Animals Bill – will stop live animal exports and ban families from keeping primates as pets.

The Government will also publish an animal welfare strategy which will raise the prospect of banning fur imports, microchipping all domestic cats and calling time on the cruel killing of pigs by gassing them with carbon dioxide.

The Conservative government has certainly come a long way since the party first won power in 2010 on a pledge to offer a free vote on legalising fox hunting, writes Christopher Hope.

This week’s Queen’s Speech will see the Tory government publish draft laws that enshrine in law the right of animals to feel pain, as well as bans on live animal exports, importing hunting trophies and keeping primates as pets.

A separate animal welfare strategy document will set the direction of travel, raising the prospect of banning fur imports, microchipping all cats and calling time on the cruel killing of pigs by gassing them with carbon dioxide.

It is some journey from “hoodie hugging” when David Cameron was leader in the 2000s to “bunny hugging” under Boris Johnson in the 2020s. And it has been witnessed at first hand by George Eustice, a party press officer in the 2000s and now the Environment secretary.

When we met in his office at the Department for the Environment, Food and Rural Affairs late on Friday, I asked him if he thinks this lurch towards saving animals rather than hunting them with packs of dogs will sit well with the party’s traditional voters.

He says: “I don’t really see that there’s an inconsistency between caring about animal welfare, wanting to promote that and believing in rural communities, and the values of the countryside.

“I grew up on a family farm from a sixth generation farming family. I’m somebody who really understands the social capital that exists in our farming communities and rural communities.

“And by having higher standards of animal welfare, there’s nothing at all that is at odds with caring also about rural communities in the countryside.”

For Mr Eustice, who grew up on his family farm with Guinea pigs, rabbits and a rescued Border Collie called Mono, the difference between then and now is that Boris Johnson wants to prioritise animal welfare.

“There were always other priorities. Boris Johnson is the first Prime Minister, probably ever, to mention animal welfare on the steps of Downing Street. We’ve now got an occupant in Number 10 who really just wants to get some of these things done.”

Critics claim that Mr Johnson’s love for animals comes from his fiancee Carrie Symonds, a passionate environmentalist. Mr Eustice says he has not talked to Miss Symonds “directly” about the new animal welfare laws.

He says: “She [Miss Symonds] has long held views on this so there’s no doubt about that – she’s campaigned on animal welfare issues.

“And it’s not as though she’s unique and alone in this. She is a Conservative she’s passionate about animal welfare, as am I, as is the Prime Minister.”

The most eye-catching of this week’s slew of animal welfare laws is an Animal Sentience Bill which will enshrine in law that animals are aware of their feelings and emotions, and have the same capacity to feel joy and pleasure, as well as pain and suffering.

An existing committee of experts and civil servants in Defra will be tasked with ensuring Government’s policies will take into account animal sentience. Ministers had been criticised in 2018 when the duty was not carried across into UK law after Brexit.

Mr Eustice says: “It would not make fishing illegal – people needn’t worry about that. It is much more than when we design policies, we have to have regard for animal sentience.”

Mr Eustice admits some of the measures – such as the ban on bringing back hunting trophies to the UK and possible restrictions on fur imports – will not affect large numbers.

The ban on keeping primates as pets, for example, is mainly targeted at the small number of people who have marmosets in homes (numbers grew after the Labour government removed restrictions in 2008 on the grounds that they are not dangerous).

But it is all about “sending a signal”. He says: “It sends an important signal around the world and this is something that we want to try and stop.”   Many of these changes – such the ban on live animal exports – are made possible by the UK’s exit from the European Union.

“As a self governing country you gain some agility and also the self confidence to make these judgments for yourself.

“And it does show that outside the EU, we can address areas of policy that some might consider, small niche areas of policy, but where you can make laws better or stronger.

Mr Eustice admits that tackling the fall-out from the coronavirus pandemic is the Government’s number one priority.

But he says: “That doesn’t mean you have to stop work on every other front. How you treat animals, and the legislation you have to govern that, is a mark of a civilised society, and we should be constantly looking to improve and refine our legislation in this area.”

It has been a busy week for Mr Eustice who last week had to defuse the row between French fishermen and Jersey’s government over access to their waters which led to the Navy sending in gunboats to ensure no one came to any harm.

“It was an entirely legitimate response to a situation that you couldn’t have predicted what might have come, and it’s better always to have your assets on standby ready to react should they be needed.”

And he is scathing of “disproportionate” threats to cut off Jersey’s power not least because France “would have to intervene in a commercial arrangement between EDF and Jersey”.

He blames the French government for not telling its fishermen that they had to agree to new licensing agreements based on their historic catches with Jersey’s government.

“It appears that some of the French industry hadn’t quite appreciated what the European Commission had agreed in the Trade and Cooperation agreement,” he says.

Jersey has now given the French fishermen until July 1 to ensure their paperwork is in order. Mr Eustice does not rule out sending in the Navy again.

He says: “If the intelligence model – and an algorithm they follow – suggested that there was illegal fishing activity in Jersey waters, then some of those assets would be redeployed into that area to address that.”

Mr Eustice is optimistic about the future of the Union – despite concern about buoyancy of support for the SNP – pointing out that “within Defra, we work very constructively with Scottish Government and with Welsh Government.

His hope is that over time, as Brexit beds in, the calls from independence parties in the devolved administrations will die away.

“They will accrue powers in everything from agriculture and environment to animal welfare policy powers that they never had before the devolved administrations will now again.

“What will happen is over time once the tensions over Brexit heal …, things will bed down the devolved administrations, all of them will realise that they can do things that they could never do as an EU member and the attraction of rejoining the EU will fade.”