CAWF welcomes announcement for mandatory CCTV in all slaughterhouses 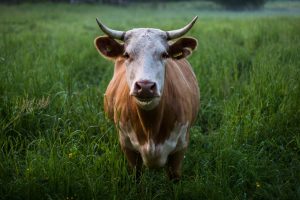 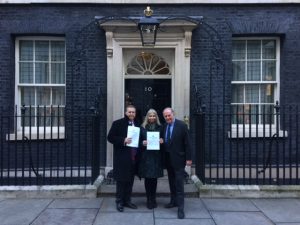 The proposals will deliver a Manifesto Commitment for CCTV to be required in every slaughterhouse in England in all areas where live animals are present, with unrestricted access to footage for Official Vets – reassuring consumers that high welfare standards are being effectively enforced.

“Conservative Animal Welfare Foundation has campaigned hard for the introduction of CCTV in slaughterhouses and we are therefore very pleased that the Secretary of State has confirmed his commitment to the highest animal welfare standards once again by honouring our manifesto commitment. We remain of the view that `Brexit` offers the opportunity to enhance animal welfare by denying access to produce generated under conditions that would not be permitted in the United Kingdom and that, of course, includes the highest possible standards in slaughterhouses”.

“This is a positive step for animal welfare in England to help prevent the suffering we have seen exposed in recent investigations as reported in the media. We support mandatory CCTV and have pushed for this in our animal welfare proposals document and letter signed by our MP Patrons which we delivered to No 10 in January with our Patron Sir Roger Gale.

We have had two meetings with Farming Minister George Eustice on mandatory CCTV in all slaughterhouses and more farm animal welfare proposals. We called for mandatory CCTV in our Conservative Animal Welfare Foundation election manifesto which we sent to all Ministers and the manifesto team in April this year.

Our Patron Henry Smith MP led a debate urging for mandatory CCTV in all slaughterhouses to help lessen animal suffering. Our MP Patrons talked on the need for CCTV in January’s Westminster Hall debate on farm animal welfare after the UK leaves the EU led by Theresa Villiers.

We have seen France recently take action on CCTV in all slaughterhouses and we are delighted that England will now do the same. We hope we’ll see the same action in Scotland and Wales. Although an increasing number of slaughterhouse operators have installed CCTV cameras in all or part of their premises, without a law to enforce installation, it currently remains voluntary”. 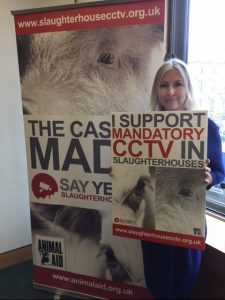 Mandatory CCTV in all slaughterhouses under new animal welfare plans

CCTV will be mandatory in all slaughterhouses in England under new plans announced today (11 August 2017) by Environment Secretary Michael Gove, as he outlined a series of measures to cement the UK’s position as a global leader on animal welfare.

The proposals will deliver a manifesto commitment for CCTV to be required in every slaughterhouse in England in all areas where live animals are present, with unrestricted access to footage for Official Vets – reassuring consumers that high welfare standards are being effectively enforced.

The Government has also confirmed it will raise standards for farm animals and domestic pets by modernising statutory animal welfare codes to reflect enhancements in medicines, technology and the latest research and advice from vets. The codes will remain enshrined in law and the first to be updated will cover chickens bred for meat.

We have some of the highest animal welfare standards in the world and the actions I am setting out today will reinforce our status as a global leader.

As we prepare to leave the EU, these measures provide a further demonstration to consumers around the world that our food is produced to the very highest standards.

Consultations on both proposals will be accessible online from 9am on 11 August 2017.

Under the new plans for CCTV, footage would be accessible to the Food Standards Agency’s (FSA) Official Veterinarians (OVs), who monitor and enforce animal welfare standards in the slaughterhouse. The FSA has strict processes in place for the approval of slaughterhouses, and specially trained vets carry out checks to make sure the welfare of animals is protected throughout their time in the slaughterhouse. If breaches are found, a slaughterhouse can be given a welfare enforcement notice, have its staff’s licences suspended or revoked, or be referred for a criminal investigation.

Mandatory CCTV in all areas of slaughterhouses will provide an essential tool in fostering a culture of compassion that could help safeguard animal welfare and we are particularly pleased to see a commitment to Official Veterinarians having unrestricted access to footage, which BVA has been calling for. Vets’ independence and unique qualifications help ensure that the UK will continue to have the highest standards of animal health, welfare and food safety.

The Food Standards Agency takes a zero tolerance approach to any breaches of animal welfare standards in slaughterhouses. Last year, we concluded that it was time to make CCTV compulsory in slaughterhouses, progress on voluntary adoption having plateaued.

I and the Board of the FSA warmly welcome Defra’s consultation about making CCTV mandatory. We look forward to the introduction of a comprehensive requirement for using, accessing and retaining footage from CCTV in abattoirs. We see CCTV as an invaluable management tool for business owners to help with compliance with official controls and to improve animal welfare standards across the industry.

Updates to the meat chicken welfare code have been developed to reflect the most up-to-date best practice on poultry farms across the country. Welfare codes on laying hens, pigs, dogs, cats and horses are expected to be updated over the next year.