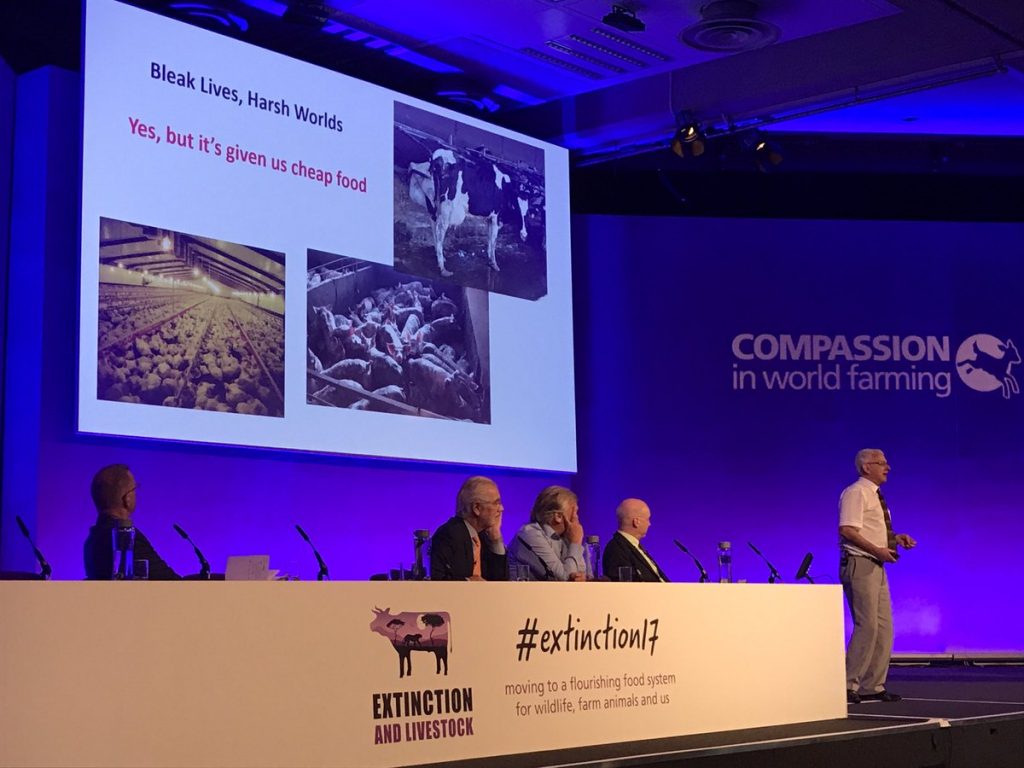 Media release from the WWF and CIWF Extinction and Livestock Conference, London

Current demand for meat is unsustainable and we must all eat less of it to safeguard the future of life on Earth, a landmark conference has heard.

As the two-day Extinction & Livestock Conference drew to a close in London today (6 Oct), organisers Compassion in World Farming and WWF warned that diets rich in animal protein are having dire effects on the environment and wildlife, with the largest impact caused by producing crops such as soy to feed livestock.

Professor Katherine Richardson, of the Sustainability Science Centre, Copenhagen, warned the conference that there are limits to how much humans can ‘push’ the Earth’s services without risking changing the state of the ecosystem upon which we depend. She said: “We are over the ‘safe limit’ for four of the nine identified planetary boundaries and agriculture has been the primary driver in bringing us over these limits. Sustainable development cannot be achieved without a major transformation of our food system.”

Current meat consumption is also having a negative impact on our health. Frank Hu, Professor of Nutrition and Epidemiology and Chair of the Department of Nutrition at Harvard University, told the conference: “A diet that is higher in plant-based foods and lower in animal-based foods is healthier and has less environmental impact. Substituting just one serving of red meat per day with other healthy foods is associated with a significantly lower mortality rate.” Dr Hu is a nutrition and diabetes researcher and Professor of Medicine at the Harvard Medical School.

Compassion in World Farming CEO, Philip Lymbery, told delegates that a new global agreement on food and farming as well as changes to all our eating habits are what it will take to save life on Earth. He said: “If we’re really going to safeguard the future, we’re going to need some kind of global agreement to replace factory farming with a regenerative food system. But that’s not all. Current demand for meat is unsustainable and we must all play a part by changing the way we eat. We all have the power, three times a day to save wildlife and end an awful lot of farm animal cruelty by choosing pasture-fed, free-range or organic meat, milk and eggs. Eating less meat, more plants.”

Glyn Davies, WWF’s Executive Director of Global Programmes said: “The close link between human healthy diets and a healthy planet needs to be appreciated. Having a healthy, plant-based diet is good for the planet.”

The conference – at the QEII Centre in London – brought together diverse interests from more than 30 countries to explore the impacts of livestock production on animals, people and the planet and to identify and start developing practical global solutions.

“We are enormously grateful to everyone who has travelled to London to play a part in this landmark conference,” said Philip. “Be assured that this is not a one-off talking shop. We intend to pursue these issues vigorously in the coming months and years both as individual organisations and as partners for a better future for our planet, and for all of life with whom we share it,” he concluded.

The conference has been supported by Birdlife Europe, the European Environmental Bureau, the Alliance of Religions and Conservation, and the University of Winchester.

For further information about the conference go to www.extinctionconference.com

Duncan Williamson, WWF’s Food Policy Manager, says: “The simple fact is that the world is consuming more animal protein than it needs and this is having a devastating effect on wildlife. A staggering 60 per cent of global biodiversity loss is down to the food we eat. We know a lot of people are aware that a meat-based diet has an impact on water and land, as well as causing greenhouse gas emissions, but few know the biggest issue of all comes from the crop-based feed the animals eat.”

says: “Extensive grazing can be vital to conservation of grasslands biodiversity and a sustainable way of producing food. But we must start to face up to the massive negative impacts generated by the current livestock farming system. Any sustainable future will require rethinking both consumption and production.”

Secretary General of the European Environmental Bureau (EEB), Jeremy Wates, said: “Industrial farming is having a devastating impact on the welfare of farm animals and it has exacerbated wildlife loss in rural landscapes – not to mention its impact on ecosystems and farmers’ livelihoods, as well as on the quality of the food we eat and the air we breathe. It is time for a farming model that works in harmony with the environment and not against it – and protecting animal welfare must be at the heart of any sustainable farming policy. This conference should wake up political leaders in Europe to the reality of the sixth mass extinction event that is already under way. At the EU level this must start with bold proposals on the future of the Common Agricultural Policy that lead to a truly sustainable farming policy – one that protects wildlife and farmers, and provides us all with healthy food today and tomorrow.”

Martin Palmer, ARC Secretary General says: “Our current food system is not about a healthy, sustainable world of food but about excess, greed and foolishness disguised as ‘market forces’. It treats the natural world as not something we are part of and therefore should treasure, but a larder we can raid and somehow hope it gets filled again. But the truth is, it won’t! As a result of this conference I would hope that all the key players – including the great faiths – would find a place at the table and together, each in their own distinctive way, will be able to inspire and guide us towards a better, fairer world.”

Dr Steven McCulloch, Acting Director, The University of Winchester Centre for Animal Welfare, said: “The University of Winchester Centre for Animal Welfare – an institution with progressive and compassionate values on humans, sentient non humans and the living environment – is pleased to support the CIWF/WWF Extinction & Livestock Conference. Livestock farming has significant deleterious impacts on the living environment and wildlife species and the high profile international speakers will discuss this key issue of the relation between livestock farming and the environment. Our staff and students will be attending the conference and are looking forward to hearing the leading experts.”