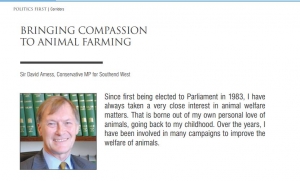 Since first being elected to Parliament in 1983 I have always taken a very close interest in animal welfare matters generally. This is borne out of my own personal love of animals going back to my childhood. Over the years I have been involved in many campaigns to improve the welfare of animals. I have initiated a number of animal welfare Bills, one of which actually got onto the Statute Book and in 1985 I served on the committee stage of the Bill that reformed the original 1911 Act.

So it goes without saying that I am a strong supporter of compassion in animal farming. I am not silly about the issue, I appreciate that not that many of us are vegetarians and that the majority of the population eat meat. However, I also strongly believe that the mark of any civilization is how we treat animals. This country, by and large, has a first-class record in animal welfare, something I always thought stood out in stark contrast to the record of some of our European partners.

Only this year the Conservative Party has set up the Animal Welfare Foundation with the objective of raising awareness of the lives of literally billions of animals reared on intensive farms around the world and how this impacts on animal welfare generally and impacts on the environment and peoples’ health. The organisation highlights how people can help to advance animal welfare. The Conservative Party manifesto actually promised to uphold the highest standards of farm animal welfare. Now I fully appreciate the tough climate in which farmers operate though I do think they will benefit from our leaving the European Union.

Each year about 70 billion animals are farmed for milk, eggs and meat worldwide with about 25,000 slaughtered every minute. There is great variety in the conditions under which the animals are raised. Whilst standards in the UK are high, elsewhere they are often lower leading to significant unnecessary pain and suffering for millions of animals. The media will report on these stories when they uncover something that is particularly gruesome. In February 2015 the government’s 5 year progress report on international animal welfare was published. It is important that our country shares the knowledge of best husbandry and veterinary practice internationally to raise standards.

The stalls which keep sows caged so they cannot move during their pregnancy were banned for cruelty reasons in the UK in 1999 but today 6 EU countries are still non-compliant. Consumers’ growing interest in how animals are treated on farms and in livestock facilities has created a strong demand for further information, so the public are rightly concerned about the rise in factory farms where animals are crammed together, where sow pigs are locked into farrowing crates, where cows never see the sun and chickens are crippled with no room to move in cages.

All farm animals used for food should be treated with respect. Farm animals in intensive farms are crammed together in sheds and are de-beaked, castrated, tails docked, de-horned and have their teeth clipped, artificially inseminated and their mating is controlled. The animals not only endure these painful procedures but also suffer from fear and stress. Intensively reared farm animals are controlled in every aspect and denied their natural behaviour to form bonds with their young and each other. They have little space to move around and never smell fresh are or feel a blade of grass beneath their feet.

Whilst there is some improvement in animal welfare, we could be doing so much more to eliminate cruelty to animals. Livestock production, fuelled by factory farming is responsible for more greenhouse gas emissions than all the worlds’ trains, planes and cars put together, yet there has been little focus on these astonishing facts. Industrial livestock production generally uses and pollutes more ground and surface water than grazing or mixed systems.

Veal crates were banned in the UK in 1990 and today the practice is outlawed in all countries in the EU. Many MPs are calling for CCTV to be installed in slaughterhouses to ensure that proper procedures are carried out to reduce the suffering of farm animals. Other MPs are calling for an end to the long-term distance live transportation of animals and the overuse of antibiotics in livestock, yet progress is frustratingly slow, for instance with the implementation of legislation to ban beak trimming of commercial hens being constantly postponed.

We consumers have the power in our hands to make a real contribution to the quality of life of farm animals. Animal welfare should be at the core of our food choice, we can decide not to purchase factory farmed meat, milk, poultry and eggs and in contrast buy products from farms with high welfare conditions where animals are reared cage free and cows graze on pastures. So let us seize this opportunity that we now have following the country’s decision to leave the EU and source our food from countries who treat their farm animals with respect.

This article appeared on p 68 in Politics First magazine, September 2016