Daily Record: “Thousands of farm animals suffering cruelty and neglect before being slaughtered.” 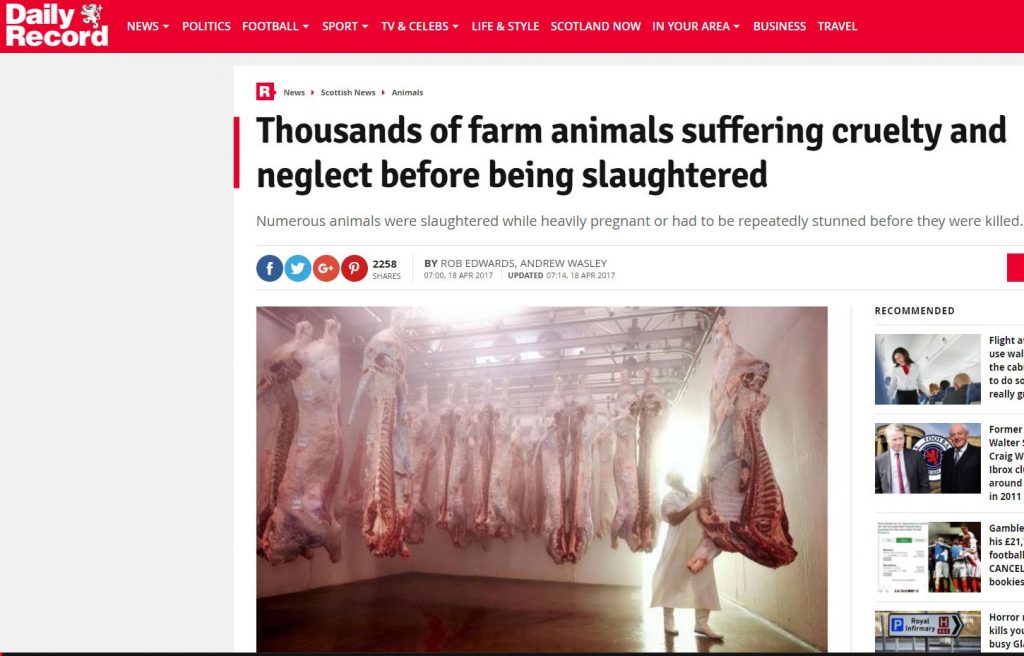 ‘Thousands of farm animals suffering cruelty and neglect before being slaughtered
Numerous animals were slaughtered while heavily ­pregnant or had to be repeatedly stunned before they were killed.’

Thousands of farm animals have suffered in more than 700 serious breaches of welfare rules in Scotland in less than two years, according to official inspection reports.

Cattle, sheep, pigs and chickens have been found injured, ­emaciated, diseased or dead on arrival at abattoirs.

Numerous animals were slaughtered while heavily ­pregnant or had to be repeatedly stunned before they were killed.

There was “cannibalism” among chickens, “unnecessary pain” endured by cattle and “massive bruising” on sheep.

In other cases there were “signs of suffering”, “evident stress” and “extensive maggot infestation”.

Investigative website The Ferret joined with the Bureau of Investigative Journalism to ­catalogue the cruelty.

Peter Stevenson, chief policy adviser of ­Compassion in World Farming, called on the Scottish Government to call a meeting of enforcement bodies “to develop a strategy to achieve hugely improved enforcement of the legislation on welfare on-farm and during transport and slaughter”.

They released figures under freedom of information law recording 706 incidents between May 2015 and January this year, many involving multiple animals.

More than a third – 257 – were “critical non-compliances”, meaning they posed “a serious and imminent risk to animal welfare” or caused “avoidable pain, distress or suffering”.

A majority of the overall figure involved cattle.

There were also 86 breaches recorded with sheep, 77 with poultry and 63 with pigs.

A third were blamed on poor conditions during transport. A further 237 were attributed to inadequate welfare on farms.

According to the FSS log, there were 130 incidents in which animals were killed in the latter stages of pregnancy.

In 100 instances, animals were found with bruising, broken legs or other injuries, and in 92 cases they were in poor health, weak  or thin.

There were 45 incidents in which stunning of the animals before killing them was deemed inadequate or ineffective or  where procedures were found to be deficient.

In one instance last September, a cow was stunned six times before it lost consciousness.

Most incidents led to trading standards or animal health offices being passed information.

As well as four legal ­investigations, the FSS issued 14 enforcement notices and gave verbal or written advice in  146 cases. The names of abattoirs and farms where the breaches were found were redacted but the investigators found seven slaughterhouses where problems were highlighted in FSS inspectors’ audits carried out in 2016.

“It is essential that those responsible receive appropriate penalties and sentences.”

Unison, who represent meat inspectors, were “disgusted, appalled and saddened” by the extent of welfare breaches.

UK national officer Paul Bell said: “The level of inhumanity applied before and during slaughter is a national disgrace.

The Scottish Government urged anyone concerned about animal welfare to report it.

A spokeswoman said: ­“Scotland has high welfare standards at slaughter, with strict legal requirements that must be adhered to.”

FSS director of operations Ian McWatt said: “We take ­proportionate action, which ranges from verbal advice to the suspension or revocation of the slaughterer’s certificate of competence.”

The Scottish Association of Meat Wholesalers said they and their members give all reports of welfare breaches “their full ­attention and have carried out all necessary corrective action to avoid future issues”.

According to 2 Sisters Poultry, their facility complied with 77 criteria and was graded as satisfactory overall.

They added: “A single case of historic non-compliance on birds held before slaughter was highlighted, which was picked up on FSS review of our own welfare ­officer’s records.

“Due to machinery breakdown, birds were housed in our holding area overnight, as agreed by veterinary staff.”

Other ­abattoirs audited by FSS did not respond to requests to comment.