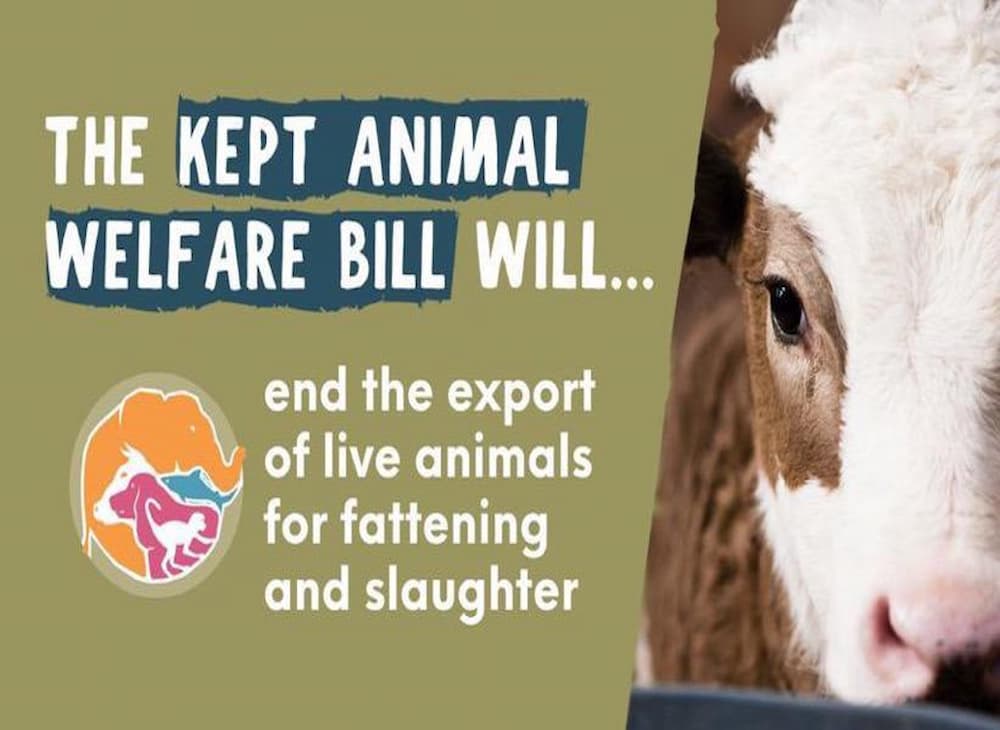 The Secretary of State for Environment, Food and Rural Affairs, George Eustice, opened the Second Reading of the Animal Welfare (Kept Animals) Bill by noting that the UK was the first country in the world to pass legislation to protect animals as long ago as the Cruel Treatment of Cattle Act 1822.

The Secretary of State for Environment, Food and Rural Affairs, George Eustice, opened the Second Reading of the Animal Welfare (Kept Animals) Bill by noting that the UK was the first country in the world to pass legislation to protect animals as long ago as the Cruel Treatment of Cattle Act 1822.

He noted that Sir David Amess had campaigned for many years on the issue of live animal exports, on primates kept as pets and on the puppy trade. He added that he had last met Sir David at an event organised by the Conservative Animal Welfare Foundation at the Conservative party conference, where he expressed his delight at how many of these issues had moved to the fore.

He explained that the Bill focused on five key areas: banning the export of certain livestock and other animals for slaughter and fattening; bringing in measures to tackle the serious issue of puppy imports into Great Britain; banning the keeping of primates as domestic pets in England ; updating legislation on dogs attacking and worrying livestock; and updating the Zoo Licensing Act 1981 to ensure animal welfare and conservation standards in zoos were strengthened, and could be updated and enforced more effectively.

Labour Shadow Secretary of State for Environment, Food and Rural Affairs and Shadow Minister for Fisheries, Luke Pollard, said that Labour welcomed the fact that many of the policies in Labour’s animal welfare manifesto had found themselves in the Bill. As such, he said, Labour would support the Bill.

He concluded by saying that in the spirit of cross-party working, he was happy to say to the Secretary of State that Labour would work with him and his Department to seek to strengthen the Bill.

Chair of the Select Committee on Environment, Food and Rural Affairs, Neil Parish (Con, Tiverton and Honiton) spoke on the keeping of primates, and commended Sheryll Murray for her work in that area over the years. He called for the licensing of primates being kept by individuals to be made very strong to ensure that the private keeping of those animals was phased out as quickly as possible.

On livestock worrying, he said that the problem was that some members of the public thought the dogs were just enjoying themselves. He stressed that so much of the damage to sheep could not be seen at the time, so Government must do everything, not only to tighten things up and make the process of identifying dogs easier but to get the message out to the general public about the danger of releasing dogs, especially when two dogs played together and caused huge damage to livestock .

On puppy smuggling, he welcomed what was being done in the Bill, but added that Government could go further, and tighten things up in this area is key. What would probably make the most difference was allowing dogs to be brought in only once they were six months old.

Chair of the Select Committee on International Development Sarah Champion (Lab, Rotherham) said she broadly supported the overall aims of the Bill but that the “devil was in the detail”. She said she particularly welcomed the Bill’s attempts to tackle puppy smuggling, but urged the Government to ensure that they were as efficient as possible. She called on Ministers to work with organisations such as Dogs Trust and Battersea Dogs and Cats Home to make sure that their proposals were robust..

She added that she would like to see increased protection for exotic animals kept as pets. She suggested that an outright ban on all exotic animals—not just primates, but bears, lions and tigers, for example—being kept as pets would be more effective and more manageable for local councils.

Andrew Rosindell (Con, Romford) said that the Bill would make a real difference to the lives of animals across the country. He noted that his Private Members Bill, the Animals (Penalty Notices) Bill, would soon come before Parliament to introduce fines for mid-ranging animal welfare and health offences, preserving criminal prosecution for all cruelty offences.

On dogs attacking or worrying livestock, he said that advocates of responsible dog ownership as well as the farming industry would warmly welcome these proposals, but the enhanced provisions were likely to lead to more dogs to being seized. He sought reassurance that provision would be made to ensure that all dogs seized under these measures would receive the highest standard of care and welfare.

On matters relating directly to Britain’s zoos and aquariums, he said it was right that the Bill would push many more zoos to scale up their conservation efforts, but that must be done with diversity in mind. “We must avoid falling into the trap of considering conservation only in terms of the amount spent or the number of introductions made—measures that only skim the surface of conservation”, he said.

Labour Shadow Minister for Northern Ireland, Alex Davies-Jones, noted that it was clear that the coronavirus pandemic had had a significant impact on animal welfare . There had been an enormous impact from the demand for animals, with research from Battersea Dogs & Cats Home finding a more than 200 per cent increase in online searches about buying a dog between February and April 2020..

Henry Smith MP spoke on the fact that poultry were excluded from the live exports ban and went on to discuss ending cages for Laying Hens.

Dr Neil Hudson (Con, Penrith and The Border) told the House that as a veterinary surgeon he very much welcomed the Bill and all its intentions. On the movement of animals, he said that the Bill needed to be clearer on some of the specifics.

Mrs Sheryll Murray (Con, South East Cornwall) expressed concern about the proposed licensing of the keeping of primates as pets. She called for a complete ban on the practice, and said that the only non-human primates in this country should be those kept by experts, such as zoos, in places where they had the socialisation that they needed with their own species.

Wiggin appealed to people to think about rehoming puppies before buying them, noting that there was “no better way of ruining the market for illegal puppies than simply getting them from the plentiful rehoming centres and charities.” He concluded by calling on the Government to look hard at dog theft and all the other animal-related crimes.

Dr Luke Evans (Con, Bosworth) said he was pleased to hear the Secretary of State clear up the difference between breeding and fattening livestock. He said the National Farmers’ Union were very concerned that the messaging was not getting out.  He said there needed to be a nuance within the messaging and urged the Government to get that across.

On pet theft, Evans noted that Battersea Dogs & Cats Home said that there was such a fear of it that dogs were not being taken out.

Sir Roger Gale (Con, North Thanet) noted the views expressed about tick and worm treatments. He reflected that the British Veterinary Association believes that the “relaxation of those regulations was a mistake and that they should be reintroduced.” Sir Roger Gale along with an intervention by Chris Loder MP then went on to speak on the inclusion of Non-stun Slaughter into the Bill.

Daniel Zeichner shadow minister for Environment, Food and Rurak Affairs, argued that “the Government are doing things in the wrong order. Just as the Environment Bill should have come before the Agriculture Act 2020.” He pointed to the Animal Sentience (Welfare) Bill, being in the other place . He explained that “we think a dog should be on a lead when near livestock, and we do not believe there should be an exemption for packs of hounds.”

On the issue of distance to abattoirs, he asked “Can the Minister commit to working to re-establish local networks of slaughterhouses, to end the suffering of animals undertaking extensive journeys inside the UK?”

Victoria Prentis for Environment, Food and Rural Affairs, argued that this Bill represented progress and pointed to the historic context: “This House has been passing animal welfare legislation since 1635, when we prohibited “pulling the Wool off… Sheep ” and forbade the attaching of ploughs to the tails of horses.”

She explained that “the Bill gives enhanced tools to the police ” and that the “Bill delivers the maifesto commitment to deliver an end to live exports.”

She ended by reminding the house of the scope of the bill which would “extend and strengthen protections for pets, farm animals and kept wild animals .”