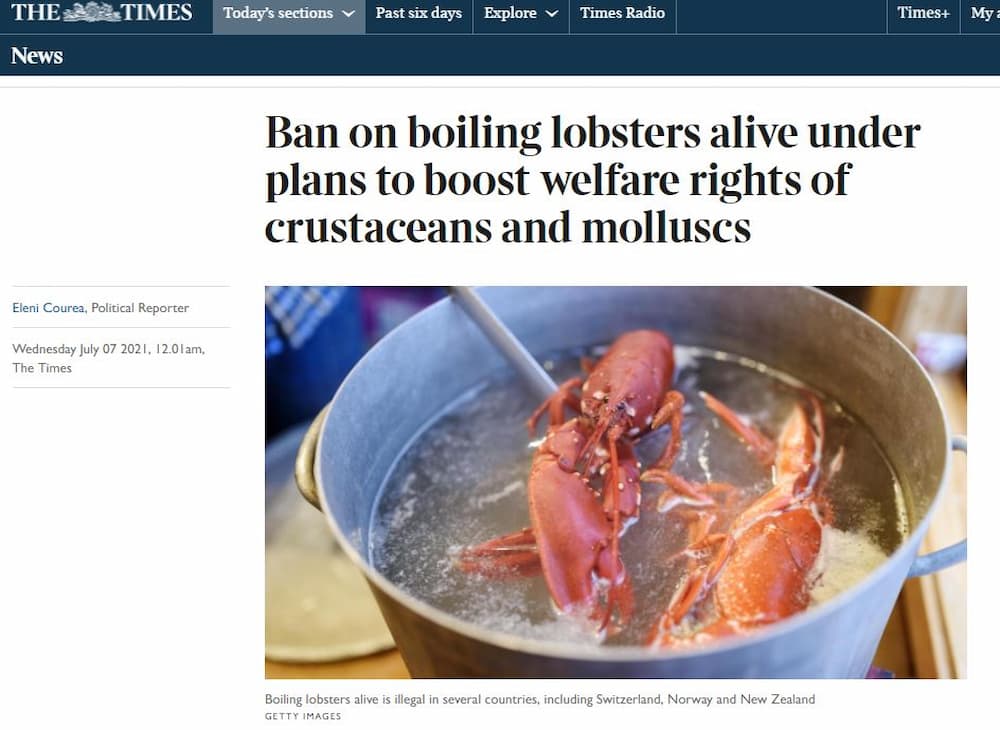 The Times: Ban on boiling lobsters alive under plans to boost welfare rights of crustaceans and molluscs

Boiling lobsters alive will be banned under plans being drawn up by ministers to strengthen the welfare rights of crustaceans and molluscs.

Boiling lobsters alive will be banned under plans being drawn up by ministers to strengthen the welfare rights of crustaceans and molluscs.

The government is preparing to recognise that lobsters, crabs, octopuses, squids and other invertebrates feel pain as part of legislation that will formally acknowledge that animals are sentient beings.

At present the Animal Welfare (Sentience) Bill, which is making its way through the House of Lords, covers only vertebrates — animals that have a backbone.

In response to calls from campaigners, ministers are preparing to back an amendment by peers to extend the legislation to shellfish and cephalopod molluscs.

The Times understands this would lead to a ban on boiling lobsters alive after government officials discussed alternative ways of killing them with the industry. The practice is illegal in several countries, including Switzerland, Norway and New Zealand. Stunning lobsters with an electric gun or by chilling them in cold air or ice before boiling is a more humane method, according to animal welfare charities.

The practice of shrink-wrapping live shellfish or sending them through the post is also likely to be banned under the amendment, put forward by Baroness Hayman of Ullock.

The government commissioned an independent review last year of the scientific evidence on whether cephalopods and decapods are sentient. The review has yet to conclude but is expected to form the basis for the government’s decision.

The Conservative Animal Welfare Foundation (CAWF), whose patrons include the prime minister’s wife, Carrie Johnson, and the environment minister Lord Goldsmith of Richmond Park, had called for the legislation to be broadened.

Maisie Tomlinson, co-director of Crustacean Compassion, said: “It is wonderful to hear that the government is planning to support the inclusion of decapods and cephalopods in the sentience bill. There is more than enough evidence for the ability of these sensitive, captivating creatures to feel pain and suffer. They undergo appalling treatment in the food industry.”

The decision may be opposed by the fishing industry, which lands more than 420 million cephalopods and crustaceans in Britain each year.

In a report published last month, CAWF argued that animals such as lobsters and octopuses were highly intelligent and able to feel pain but were discriminated against in legislation because their “neurological architecture differs from our own”. It cited scientific studies suggesting that octopuses made trade-offs between searching for food and avoiding predators and that crayfish remembered and learnt from their actions.

“Crustaceans and cephalopods undoubtedly experience the world in extremely different ways to ourselves. What matters, though, is whether that experience entails conscious experience of pleasure and pain. We believe that the evidence is sufficient,” the report concluded. “Given the strength of the evidence and the vast numbers of animals involved, it is important that we move past the question of whether these animals can suffer and towards exploring how we can alleviate their suffering.”

A spokeswoman for the Department for Environment, Food and Rural Affairs said: “We’re proud to have some of the highest animal welfare standards in the world and we are fully committed to strengthening them further to ensure all animals avoid any unnecessary pain, distress or suffering. We have commissioned an independent external review of the available scientific evidence and will carefully consider the results of this review.”

Electric shock Stunning the lobster with an electric gun is the only humane way of killing it, according to the RSPCA. This is an unrealistic option for domestic cooks, however, as stunning devices developed for this purpose retail at £2,500.

Ice stun An alternative is to stun the lobster by chilling it in cold air or an ice slurry for at least 20 minutes, according to RSPCA Australia. The crustaceans enter a stupor if kept below 4C.

‘Mechanical’ killing The lobster should first be stunned and then killed as quickly as possible, by splitting it longitudinally on its underside with a large knife. This can be done without stunning the animal first but is not considered as humane because it would take even a skilled chef several seconds.

Link to our report referenced in the article