We Welcome the Conservative Party Manifesto Commitments to Welfare and Environment

The Conservative Party Manifesto commits to advance animal welfare and to protect the environment.

“The Conservative manifesto has set out positive commitments to advance animal welfare, protect the environment and tackle climate change.”

These include introducing tougher sentences for animal cruelty, cracking down on the illegal smuggling of dogs and puppies and bringing in new laws on animal sentience.

There is commitment to end excessively long journeys for slaughter and fattening – one of the many benefits of leaving the European Union.

The Conservatives will bring the ivory ban into force and extend it to cover other ivory-bearing species, and ban imports from trophy hunting of endangered animals.

Keeping primates as pets will be banned.

Compulsory cat micro-chipping will be introduced giving cat owners peace of mind and increasing the measures to tackle cat theft.

The manifesto focuses on a Post Brexit deal for farming on page 42:

“Once we have got Brexit done, we will free our farmers from the bureaucratic Common Agricultural Policy and move to a system based on ‘public money for public goods’.

“In return for funding, they must farm in a way that protects and enhances our natural environment, as well as safeguarding high standards of animal welfare.

When we leave the EU, we will be able to encourage the public sector to ‘Buy British’ to support our farmers.’

“In all of our trade negotiations, we will not compromise on our high environmental protection, animal welfare and food standards”.

There are also important pledges to ban exports of plastic waste to non-OECD countries, so that less plastic ends up dumped in the oceans.

The Conservatives will set up new international partnerships to tackle deforestation and protect vital landscapes and wildlife corridors and will establish a new £500 million Blue Planet Fund to help protect our oceans from plastic pollution, warming sea temperatures and overfishing, and extend the Blue Belt programme to preserve the maritime environment. The Conservatives will continue to lead diplomatic efforts to protect 30 per cent of the world’s oceans by 2030.

The Conservatives will set up a new independent Office For Environmental Protection and introduce our own legal targets, including for air quality and will invest in nature, helping us to reach our Net Zero target with a £640 million new Nature for Climate fund. 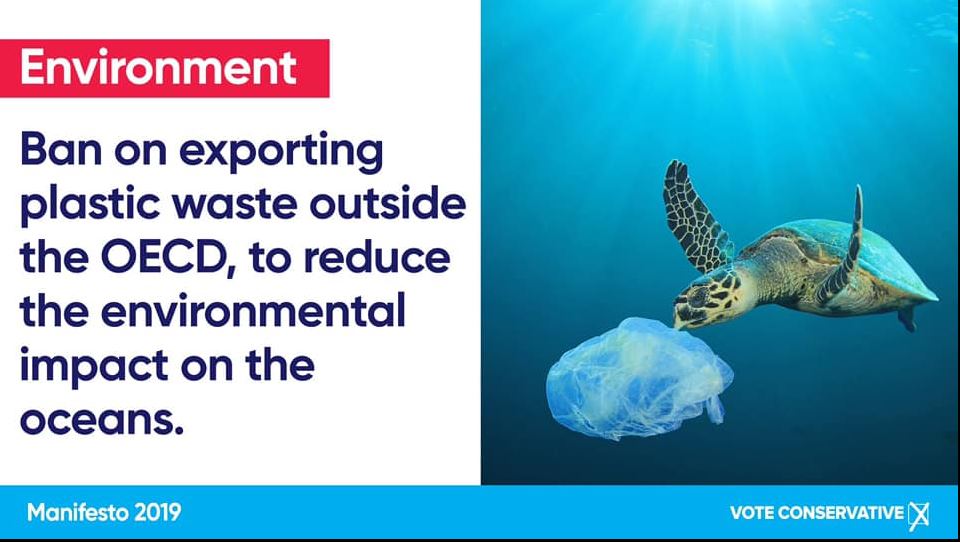