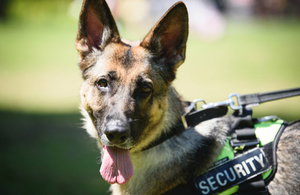 Courageous service animals such as police dogs and horses will be offered greater protection under a new law being backed by Government.

The Animal Welfare (Service Animals) Bill has been published in Parliament by Sir Oliver Heald MP and is scheduled for its second reading today (Friday 15 June).

It relates to the prominent Finn’s Law campaign, named after the police dog which was stabbed whilst pursuing a suspect with his handler PC David Wardell.

The proposed legislation will remove a section of the current law of self-defence, often used by those who harm a service animal.

This change, coupled with the government’s plans to increase maximum sentences for animal cruelty offences to five years in prison, will make sure those who harm service animals are punished accordingly.

This Bill will offer stronger protection for the many brave service animals that help to protect us. I pay tribute to PC David Wardell, Sir Oliver and all those who have campaigned for Finn’s Law.

This Government is continuing to raise the bar on animal welfare, whether it be for our beloved pets, brave service animals or on farms.

My boy Finn, now retired, was one of several thousand service animals that work to protect the whole of society 24 hours a day, everyday. When Finn was seriously injured it didn’t seem right to me or the public that he was seen as an inanimate object/property, in law.

This campaign and Bill is my way of saying thank you to Finn for saving my life and to the many others for the truly outstanding and brave work they do everyday.

With the amazing support of my MP, Sir Oliver Heald QC, a great working relationship with Defra was formed. Sir Oliver, along with Sarah Dixon and Nicola Skelley, have worked so incredibly hard to get us to the point we are at today. I would like to take this opportunity to thank them and Defra from my heart and from the thousands of supporters that our service animals have.

What you have done today will help protect our amazing service animals, animals we should be very proud of. It’s time for Finn’s Law

The Bill proposes amending the Animal Welfare Act 2006 to address concerns on an existing section where a defendant accused of causing unnecessary suffering to an animal can claim they were protecting themselves and justified in using physical force against a service animal.

I am delighted that the campaign for Finn’s Law has gained the support of the Government.

I’ve had productive meetings with Defra ministers on this Bill and am looking forward to its passage through Parliament. This is a good day for all of our brave service animals.

We are absolutely delighted to receive and welcome the backing from Defra to Sir Oliver Heald’s amended Bill.

Throughout the Finn’s Law campaign we have been grateful to Lord Gardiner, in particular, for the respectful discussions he has held with Sir Oliver.

For too long have the Courts struggled with securing prosecutions for injuries intentionally inflicted on Police and Prison dogs and horses in particular.

We are looking forward to the 2nd reading of Sir Oliver’s Bill and we feel optimistic for a positive outcome. We will continue to work tirelessly towards securing protection for these animals.