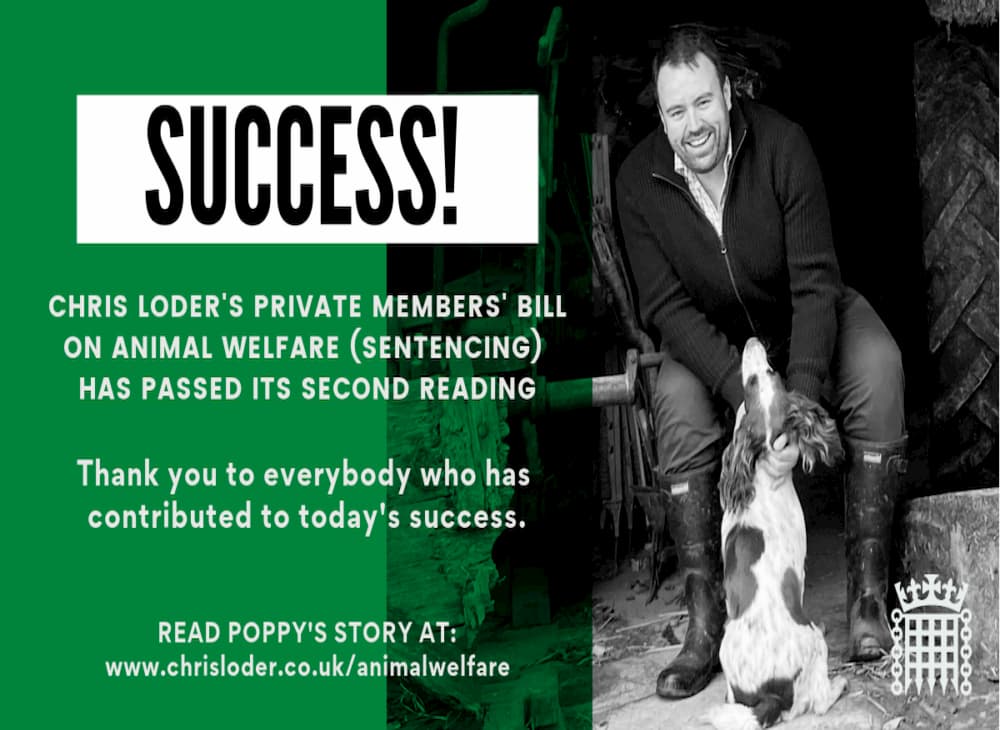 Chris Loder, the MP for West Dorset, introduced his Animal Welfare (Sentencing) Bill in the House of Commons on 5th February 2020. The Private Members’ Bill makes provision for the maximum penalty for certain offences under the Animal Welfare Act 2006 to be increased from six months to up to five years.

The Bill’s second reading took place in the House of Commons at 9.30am on Friday 23rd October 2020.

The MP, who is a fourth generation farmer’s son and an advocate of high animal welfare, says his own dog Poppy, a Springer Spaniel, is his inspiration for the Bill. She was cruelly abandoned at the roadside in West Dorset but is now a much-loved farm dog and family pet. He says:

“Despite legislation being in place, I was shocked to learn that in 2019 the RSPCA investigated more than 130,700 complaints of cruelty against animals and secured 1,678 convictions. I believe more stringent sentencing will act as a greater deterrent against animal cruelty. Britain needs to take a lead on global standards for animal welfare. We are renowned to be a nation of animal lovers – now let’s prove that by handing down appropriate penalties to those who bring unnecessary suffering to animals”.

Government backs Animal Welfare (Sentencing) Bill as it takes crucial step forwardPlans which will mean animal abusers could face up to five years in prison move a step closer.

The Government is backing legislation for tougher prison times for those who cruelly mistreat animals, as plans to introduce more stringent sentences move a step closer today (Friday 23 October).

The Bill, introduced in Parliament by Chris Loder MP in February, will see the most serious perpetrators of animal cruelty face up to five years in prison, up from the current maximum of six months. Today, the Bill will have its Second Reading in the House of Commons, backed by the Government.

These tougher prison sentences would be among the toughest sanctions for animal abuse in Europe, strengthening the UK’s position as a global leader on animal welfare.

The Bill follows a public consultation in 2017, in which more than 70% of people supported the proposals for tougher prison sentences for those guilty of animal cruelty offences. This could include dog fighting, cruelty towards domestic pets or gross neglect of farm animals.

It is high time as a nation that we take the lead on global standards for animal welfare and hand down tougher custodial sentences for those who inflict the worst kinds of cruelty on innocent animals.

My Bill, which I’m pleased has cross-party support and is fully endorsed by the RSPCA and other animal welfare charities, delivers a strong message to animal abusers that their behaviour will no longer be tolerated. We need to get it on the statute book and send a clear signal to potential offenders there is no place for animal cruelty in this country.

There is no place for animal cruelty in this country and this crucial piece of legislation will bring in more stringent sentences for animal abusers who commit the most heinous crimes, cementing our role as a global leader in animal welfare.

In addition to supporting this Bill, we are taking steps to ban primates as pets, crack down on the illegal smuggling of dogs and puppies, and we will be making good on our commitment to end excessively long journeys for slaughter and fattening of farm animals.

I would like to thank Chris Loder MP for introducing this vital Bill. We will do all we can to support its swift passage through Parliament.

We’re thrilled that The Animal Welfare (Sentencing) Bill has passed through this stage and that we’re one step closer to getting real justice for abused and neglected animals in this country.

In the three years since the Government pledged to increase the maximum sentence under the Animal Welfare Act from six months to five years, immediate custodial sentences have been imposed on 132 individuals following RSPCA investigations into cruelty and these included horrendous cases such as a dog who was kicked to death by her owner and a man who bit off a kitten’s ear.

Tougher sentencing would give courts more flexibility to impose longer prison terms on those people guilty of the most serious offences to better reflect the severity of the crimes and to act as a stronger deterrent to others.

The Second Reading of the Animal Welfare (Sentencing) Bill is due to conclude on 23 October. The Bill will then go to Committee Stage, with Report Stage and Third Reading following this, before transferring to the House of Lords for further scrutiny.

You can track the progress of the Animal Welfare (Sentencing) Bill and read debates on all stages of the Bill’s passage on the Parliament website.

The Animal Welfare (Sentencing) Bill offers a tougher deterrent for animal abuse through a significant increase from the current maximum sentence of six months to five years. We welcome the increases in animal cruelty sentencing as the current sentences are woefully inadequate and this Bill is a huge step forward to help better protect animals. We are hopeful the Bill will become law very soon to protect animals across England and Wales