Ambitious new policies unveiled at the start of Conservative Party Conference to protect animals in our homes, in farming and in the wild 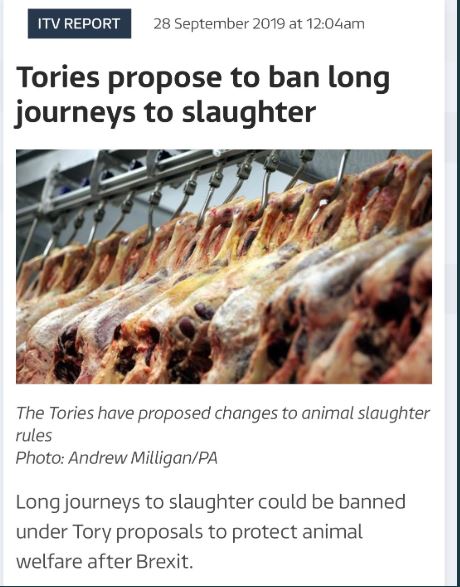 Theresa Villiers and Zac Goldsmith: Conservative Government sets out new measures to protect animal welfare “There is no place in this country for animal cruelty”

Animal welfare will be put at the heart of the Government’s domestic agenda, with ambitious new policies unveiled at the start of Conservative Party Conference to protect animals in our homes, in farming and in the wild.

We will protect animals in our homes by consulting on microchipping for cats; and by taking steps towards a ban on keeping of primates as pets.

We will consult on introducing compulsory micro-chipping for pet cats to subject them to the same safety measures that currently apply to dogs. This should give cat owners more peace of mind and strengthen the measures we have to tackle cat theft.

We will issue a call for evidence on proposals to ban the sale of primates as pets and phase in an outright ban on keeping primates as pets in the future. Whilst it is currently legal to own primates as pets, there are longstanding concerns about whether the welfare needs of these animals can be met in such circumstances.

We will protect animals in agriculture by consulting on improving animal welfare in the transport of live animals; in particular by banning long journeys to slaughter.

We propose to accept recommendations from the Farm Animal Welfare Committee that live animal journeys should be minimised and that animals for slaughter should be sent to the nearest available abattoir, rather than further afield.

This regulatory change would be likely to bring to an end more or less all live exports for slaughter. Previous attempts to restrict this trade have been prevented by EU single market rules.

We will improve protection for animals in the wild by consulting on a ban on the import and export of trophies from the hunting of endangered animals.

Following our world-leading ivory ban, Conservatives in Government will continue to showing leadership in this space. In May 2019, Conservative Ministers held a roundtable with all sides of this debate and the views expressed have informed the proposed consultation on further restrictions on the import and export of hunting trophies.

“High standards of animal welfare are one of the hallmarks of a civilised society. We have a long tradition of protecting animals in this country, often many years before others follow. Leaving the EU allows us to take even bigger steps forward on this.

“The measures we are announcing today will protect our animals in our homes, in agriculture, and in the wild.

“I have campaigned for an end to live exports and what has been announced today will choke off this trade.

“This is an important victory for all those thousands of people across the country who have campaigned for tougher measures to protect animal welfare.”

Commenting on the announcement that we take we will take forward a ban on trophy hunting imports, Zac Goldsmith MP, Minister of State for the Department for Environment, Food and Rural Affairs, said:

“The fight against trophy hunting of endangered animals matters. It is clear that it is morally indefensible and that is why I am delighted that the Conservative Government will consult on a ban on the import of these trophies. By placing a higher value on animals alive rather than dead, we will begin to turn back the tide of extinction.”

We will consult on introducing cat microchipping to introduce the same safety measures for cats that dogs already have.

We will consult on proposals to ban the keeping of pet primates. Today we are issuing a call for evidence on:

• banning the sale of primates to private individuals;

• banning the import of primates by private individuals;

• phasing in a ban possession of primates by private individuals to take effect in the future, allowing a managed transition; and

• introducing a new licensing regime to ensure the welfare needs of primates kept by private individuals are being met more effectively.

We will consult on improving animal welfare in the transport of live animals, including banning long journeys to slaughter. Last year we issued a call for evidence in relation to future welfare in transport standards, followed by commissioning external research and inviting the Farm Animal Welfare Committee to conduct a review and make recommendations. These steps have informed the policy we intend to take forward to public consultation, after which primary legislation could be brought forward.
We will consult ways to restrict the import and export of hunting trophies from endangered animals.

In general, animal welfare policies are devolved. However, future policies on live exports and trophy hunting may be reserved, as they may affect UK import and export policies.

“We welcome the new announcements which will put animal welfare at the heart of the Government’s domestic agenda and protect farm animals, wild animals and domestic animals. This is fantastic news ahead of World Animal Day on October 4.

We are delighted that animal welfare proposals in our Conservative Animal Welfare Foundation manifesto  will be carried forward for consultation. These include an end to live animal exports, an end to trophy hunting imports, the introduction of compulsory micro-chipping for cats and a ban on pet primates.

For many years we have campaigned  for an end to live animal exports with our Patrons Rt Hon Theresa Villiers and Rt Hon Zac Goldsmith who have long spoken out at our parliamentary and fringe events to end the misery in this trade.

The UK is a nation of animal lovers. And our Party has a proud record of standing up for animal welfare. The UK banned veal crates, sow stalls and fur farms years ago.  Our party introduced CCTV in all slaughterhouses, introduced the UK ivory sales ban, banned micro beads which harm marine life, introduced a ban on wild animals in circuses and third-party dog sales, introduced Finns Law to protect service animals, increased animal cruelty sentencing and more animal welfare and environmental measures.  As we leave the EU, we will seize the opportunity to make our animal welfare standards the highest in the world.”

“Excellent News. Well done to everyone who worked on this.” 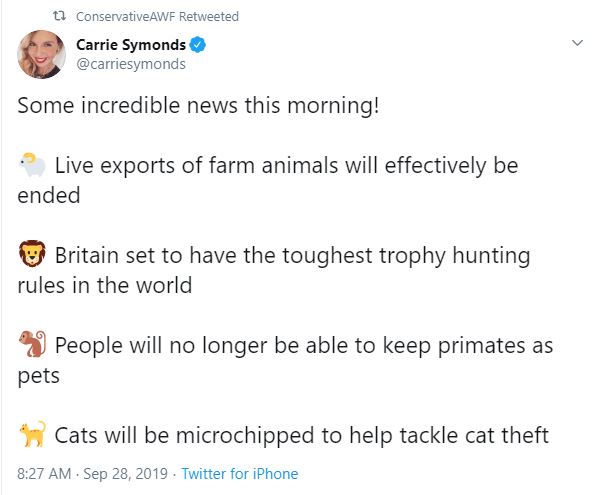