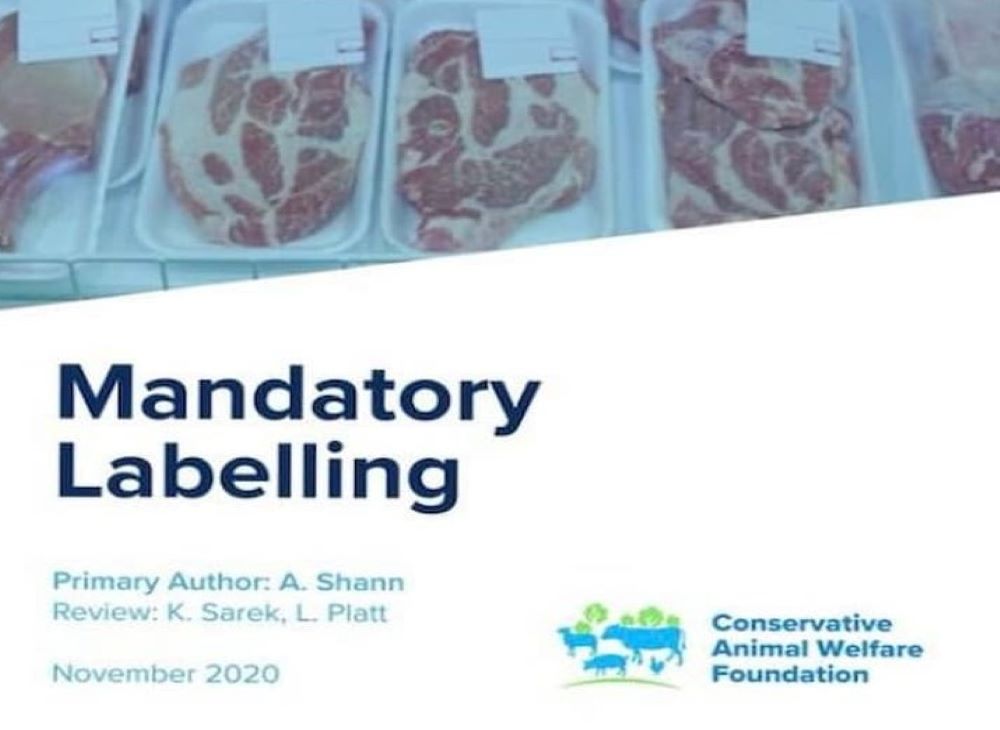 International Trade Comittee: UK trade negotiations - 25th March 2021 The committee considered and heard evidence on how to best make labelling work both for imports and domestic products and produce.

Our research report urging for Mandatory Labelling sent to DEFRA, Ministers and MPs in 2020

Committee chair Angus Brendan MacNeil MP (SNP) opened the sessions probing the legal requirements for labelling food for method of production . Dr Iyan Offor, researcher at Strathclyde Centre for Environmental Law Governance, University of Strathclyde explained that aside from eggs and fish there were no mandatory methods of production labelling laws. He suggested that the UK had the potential to be something of a ‘vanguard’ in this areas, noting the international direction of travel.

in response to Craig Williams MP (Con), David Bowles, head of public affairs at the RSPCA stated that the RSPCA was fully supportive of the method of production labelling, stressing the importance of buying higher quality products, with the results showing in the eggs. He pressed that consumers were fully supportive of this method of production labelling.

David Bowles explained that clear terms, with a finite number of terms and a clear method to show how these terms related to the animal being produced were the best and more effective way to display this labelling.

Peter Hardwick, the BMPA’s trade policy adviser, stated that as an industry they were not against providing this additional information to consumers, but stated the question lay in deciding what information to give and how to present it. He added that meat at least was not traded in the way in which it was sold so it would be retailers that would have to provide this information, both for imports and domestic production .

Minette Batters, president at National Farmers Union, outlined the challenges at the heart of this debate were trust issues but stressed that the focus should be on retail labelling.

Mark Menzies MP (Con) went on to ask if this method should be applied to all aspects of retail, such as not just a chicken but the chicken pieces in a ready meal. Bowles noted that changes were being seen and the trends in that direction, citing the examples of how some mayonnaise products listing where their eggs came from. Batters added that should this apply to ready meals, then this would have to apply to every ingredient but acknowledged the extra costs felt by retailers on additional labelling.

Food labelling in the devolved nations, Offer explained, was in part retained from EU law but under the Internal Market Act new rules also applied.

Referring to hormone injected beef or chlorinated chicken to reach the UK, the panel were asked whether this would require a vote in the UK parliament. Bowles pointed to the fact that Northern Ireland was still part of the single market and so products could enter the UK from this route but explained that animal trade was not a devolved issue.

Minnette Batters stated that if for example chlorinated chicken was deemed safe by the FSA, then the UK would have no option but to import it.

Peter Hardwick, the BMPA’s (British Meat Processors Association) trade policy adviser, said the current level of trade friction experienced by British meat exporters was “enormous, absolutely enormous”. He urged the government to consider a veterinary agreement with the EU to help reduce that friction. He said it was taking twice as long and costing twice as much to get products to the EU as it did before the end of the transition period.

Neil Parish MP (Con) chair of the EFRA committee asked about processed food and whether labelling could do on this. Hardwick reiterated the issue around mandatory labelling was how it was done and how much it costs. He emphasised that it was crucial to keep to WTO rules and stressed the need to find a common agreement with other countries on this. He added that a challenge for the industry was to make more consumers aware of the quality they were buying.

MacNeil addressed Victoria Prentis, parliamentary under-secretary at DEFRA, probing their review and consultation on food labelling . The minister explained that the rapid review had been overtaken by the pandemic, but stressed that they still aimed to do the consultation on food labelling on animal welfare by June of this year. There would be two main purposes of the review; to show more transparency what people were eating and to promote animal welfare. She noted the loud calls for the department to address labelling in the environmental space which would require further consultations, adding that their review was the beginning of an important conversation.

In response to Mike Whitley MP (Lab), Prentis suggested that other aspects of labelling would be thrown up by Henry Dimbleby’s report. Carbon capture and environmental labelling would be high on the agenda, she explained noting that some had suggested a traffic light system to be introduced.

Parish stated that they would need specific labelling for the Jewish community in relation to animal stunning, as opposed to Halal stunning adopted by those in New Zealand . He asked whether this system of Halal labelling could be brought in in the UK.

Victoria Prentis acknowledged the concern around the welfare issues and terminology around the slaughter of animals. She asserted that this was the moment to tackle these issues and would be part of their consultation to be launched. She assured the committee that they would be looking at practices around the world and wanted to be world leaders in this area.

Greg Hands, minister of state for trade policy at the Department for International Trade, addressed the issues of checks and balances on the meat coming in from a trade aspect, noting that WTO requirements did not stop their labelling requirements as long as their four rules were abided by. He noted that some of the UK Halal products were in strong demand for exports urging some of the restrictions on UK lamb in the USA to be lifted. He emphasised the opportunities in this area, while Parish urged partial-stunning to be adopted to adhere to animal welfare standards as well as promote trade.

Tim Smith, former chair at Trade and Agriculture Commission, urged greater standards and transparency to be set so that the UK would be in a good position for exports.

Food eaten out of the home

Anthony Mangnall MP (Con) probed how the consolation would take into consideration what food went into restaurants. Prentis explained that the consultation would also include food eaten out of home.

Work with the WTO on mandatory labelling

Hands noted his department’s close working with DEFRA on these issues, adding that most WTO rules were designed to prevent domestic rules being discriminatory. He stated the UK’s active work with the WTO on this as they took their individual seat last year, asserting the government’s commitment to high standards on animal welfare, food safety and environmental standards.

Mark Garnier MP (Con) asked why it was necessary to have a consultation on method of production labelling. Prentis explained her concern relating to the internal market and her desire to promote transparency to the internal consumer .

Victoria Prentis urged the committee to look at Lidl ‘s labelling for chickens as one way that method of production could be displayed. She noted that the chlorinated chicken example was perhaps overused but suggested that this demonstrated that the UK had laws in place. Their new consolation would look at whether consumers could be influenced further relating to the food they ate, she explained, adding that people’s buying behaviours had changed over the past year with a shift in emphasis towards buying locally and buying sustainably.

Greg Hands explained that it was difficult to have international conversations around food labelling until domestically things had been established. He declared however that the UK was adamant on their animal welfare, food safety and environmental standards. He empathised that a trade deal would not be a backdoor entry for substandard food to come into the UK.