Britain Is A Nation Of Animal Lovers. So Let’s Act Now To Stop The Poaching Crisis. By Zac Goldsmith MP 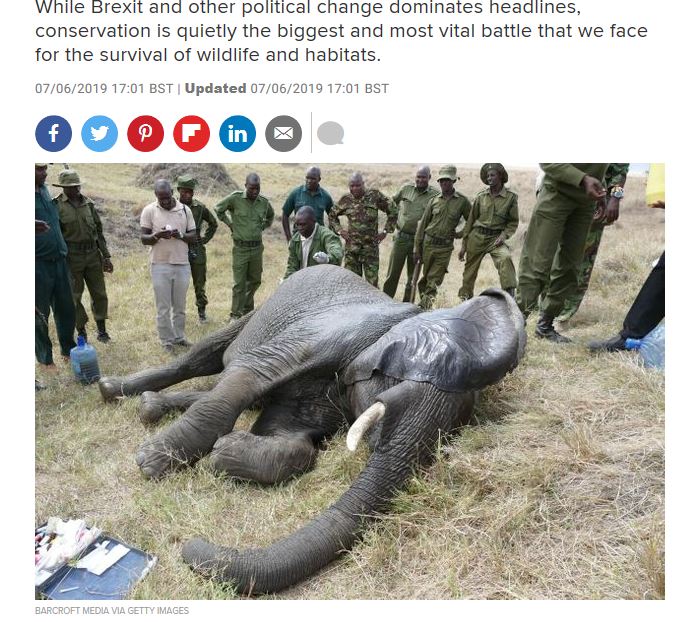 Britain Is A Nation Of Animal Lovers. So Let’s Act Now To Stop The Poaching Crisis.

While Brexit and other political change dominates headlines, conservation is quietly the biggest and most vital battle that we face for the survival of wildlife and habitats.

The United Nations-backed IPBES report released earlier this month made for extremely sombre reading. It revealed that nature is declining globally at rates unprecedented in human history, with a disturbing acceleration in the rate of species extinctions.

It brought home that we are in the midst of the sixth great extinction. It is happening on our watch, and as a direct consequence of our activities as human beings. We therefore have a responsibility to take positive action to reverse this trend – we need to change the way we relate to the natural world and we cannot delay.
With Brexit and other political change dominating the headlines, conservation may not be at the top of the agenda. However, it is the biggest and most vital battle that we face for the survival of wildlife and habitats, as well as our own future.

Despite the very depressing statistics on species decline, there are some positive changes taking place. While the iconic elephant continues to be slaughtered for the ivory trade at a rate of 20,000 per year – that’s a shocking one every 26 minutes – it was heartening to see the huge public, and political, momentum in the UK for a ban on trade in ivory reach fruition at the end of last year.

With the UK historically playing a major role in the development of the global ivory trade, it is only right that we lead the way in stopping it. When the legislation comes into force later this year, it will represent one of the strongest ivory bans in the world. I hope it will encourage other countries to introduce similar legislation and we should not underestimate the very real difference such ivory bans make as we work to ensure that legal ivory trade can no longer provide a smokescreen for illegal trade and the further killing of elephants.

One of the organisations at the forefront of the fight to save elephants and all animals in need, one by one, is the International Fund for Animal Welfare (IFAW). I recently joined IFAW at Westminster as the charity marked 50 years of campaigning on a variety of animal welfare issues, from working to end the Canadian seal hunt and commercial whaling to the recent UK passing of Finn’s Law, to better protect service animals from attack. Despite a time of great political upheaval, it was heartening to see a room full of people, from across political parties, other NGOs and concerned individuals, all standing together to take up the challenge of protecting some of our most endangered species; to do all we can individually and collectively to ensure their survival for future generations.

I have been pleased to work alongside IFAW on many of its campaigns, not least the campaign to tackle the illegal wildlife trade, much of which now takes place online, via online marketplaces, the dark web and even social media platforms. Ten years after eBay took a vital stand against online ivory sales by banning the sale of ivory via its site, many other websites and some of the world’s leading technology companies are also playing their part and working with IFAW and other groups to stop wildlife cybercrime.

In the coming weeks and months, we have an opportunity to further protect not just elephants from the ivory trade, but also other ivory bearing species, such as hippo, walrus, narwhal, sperm whale, killer whale and even the warthog. Before the UK ivory ban comes into force, the Government will consider extending it to cover not just elephant ivory but also ivory from some of these other species also under threat from poaching for their ivory.
IFAW is calling for the ivory ban to be extended to cover hippo ivory, in particular, to better protect these vulnerable animals from the threat of poaching for their teeth. Local populations of hippos massively declined in the 1990s and early 2000s due to poaching and they have become increasingly threatened by demand for their teeth, meat and skin, as well as the impact of habitat loss. With the closure of more domestic markets for elephant ivory, there is concern that elephant poachers could switch to killing hippos.

From elephants to hippos, rhinos to tigers, as well as the dogs and cats and other animals that share our lives on the planet we call home, each of us has a part to play in ensuring their survival and welfare. The choices we make every day as consumers, or as tourists, can make a difference to an animal’s future.
We have always been a nation of animal lovers, and this is why we have seen fantastic victories and steps forward in animal welfare in the UK over recent decades, which we can be proud of.

But the battle to stop the sixth extinction is the biggest battle we face. It dwarfs everything else we debate in Parliament. In 50 years, people will not be talking about Brexit. People will be talking about whether or not we rose to today’s challenge. Let us act now.

Zac Goldsmith is the Conservative MP for Richmond Park

This article was first published in the Huffington Post, 7 June 2019