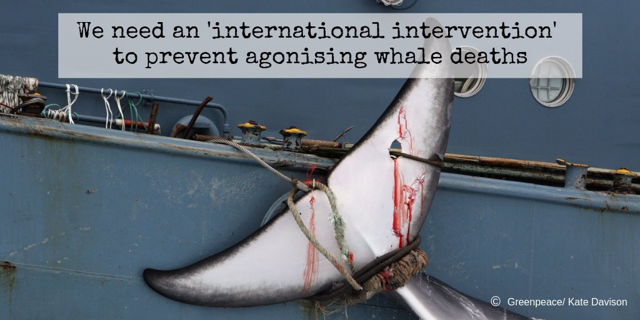 LONDON (Friday 28 June 2019) — Celebrities and animal conservation and welfare NGOs from across the globe are calling for an ‘international whaling intervention’ to be staged at the G20 summit in Osaka as summit hosts Japan prepare to launch a renewed commercial whaling programme. The programme will see Japan openly killing sei, Bryde’s and minke whales for consumption with no pretence of science.

Letters have been sent to all G20 leaders calling on them to publicly object at the summit to Japan’s commercial whaling intentions, and to deliver a joint declaration calling for the end to all commercial whaling globally. See the full letter here.

Celebrities Stephen Fry, Ricky Gervais, Dr Jane Goodall, Liz Bonnin, Steve Backshall, Virginia McKenna and Nicky Campbell, alongside more than 100 conservation charities and champions[3] within almost all the countries in the G20,[4] are backing pleas for international anti-whaling pressure to be placed on Japan.

A  march against whaling will take place in London to the Japanese Embassy on Saturday 29 June at 12.30pm starting in Cavendish Square Gardens. All are welcome.

Open letter to G20 leaders on Japans exit from the IWC

As you prepare to take your seats at the first ever G20 Summit to be held in Japan, we write to express our deep concern over the Japanese Government’s decision to leave the International Whaling Commission (IWC), effective 30th June 2019, and conduct commercial whaling within its 200 mile Exclusive Economic Zone and coastal waters.

We ask you to send a public message to your Summit’s honourable hosts that your countries object to Japan’s commercial whaling intentions in the strongest possible terms.

The international ban on commercial whaling, agreed by the IWC in 1982, applies to territorial waters as well as the high seas. It is one of the world’s most important conservation and welfare measures and has saved several populations from extinction. It has proved of vital importance in protecting the world’s great whales, enabling the gradual recovery of whale populations after decades of human-driven, catastrophic decline. However, many whale populations remain depleted or endangered.

Today, all whale populations are vulnerable to non-hunting threats including bycatch, ship collisions, climate change, and chemical, litter and noise pollution, which will take their toll on these mammals long into the future.

It therefore remains critical that co-ordinated global efforts are maintained to ensure the continued protection and survival of the world’s whales. This includes maintaining the international ban on commercial whaling.

Japan’s decision to overtly conduct commercial whaling, whilst also leaving the international body charged with overseeing whale conservation and whaling, shows a disregard for their duty to co-operate in the management of living marine resources as required by both customary international law and the United Nations’ Convention on the Law of the Sea.

Japan’s commercial whaling aspirations serve no pressing need for whale meat in Japan or anywhere else in the world. Consumption of whale meat in Japan declined by almost 99% between 1962 and 2017, during which time government data shows that less than 4,000 tonnes were eaten.

Commercial whaling is an inherently and exceptionally cruel practice which has no place in the 21st Century. There is no reliably humane way to kill whales at sea, and exploding harpoons often cause these animals to die slowly and in agony.

As the G20 Summit takes place in Osaka, peaceful protests will take place in London, Edinburgh and other cities around the world, reflecting overwhelming global public opinion that commercial whaling is inhumane, archaic and unnecessary.

Whales are iconic, long-lived and socially complex. They are important sentinels of the health of our oceans and contribute important ecosystem services to the marine environment. International collaboration to protect whales is a global responsibility that must not be undermined by a single country acting in isolation, motivated by short-sighted self-interest.

We therefore request all G20 leaders to agree a declaration at the G20 Osaka Summit, calling for an immediate end to all commercial whaling.