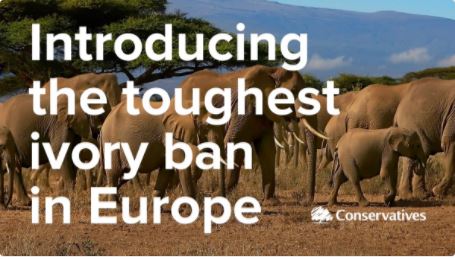 Conservative Animal Welfare Foundation congratulate the Government on the UK Ivory Sales ban and commitment to protect the elephant population.

“This is a very significant step towards helping to save a magnificent, proud and endangered species. Conservative Animal Welfare Foundation would like to congratulate the Secretary of State who is clearly determined to deliver on his promise of animal welfare reforms. We look forward to further positive measures in the near future.”

“I welcome the Government’s action to address the fact that around 20,000 elephants are being slaughtered each year due to the global demand for ivory.

“At the start of the year I questioned the Foreign Secretary in the House of Commons on the importance of national ivory bans and am pleased that the UK will introduce a ban on ivory sales to help protect elephants for future generations.”

“This is fantastic news, and I’m grateful to Michael Gove for being true to his word. We are losing 20,000 elephants per year – one every 26 minutes, and without urgent action, we will be responsible for wiping out this extraordinary species. Currently, the UK is the largest exporters of legal ivory in the world. That both stimulates demand for ivory and gives the traffickers a means to launder new ivory as if it were old. So this new law isn’t merely symbolic; it will help close down a grotesque trade.”

The announcement follows the Government’s consultation on a UK ivory sales ban, which attracted more than 70,000 responses.

Elephant Populations are at an all-time low with the species facing extinction due to the ivory poaching crisis which is killing at least 20,000 elephants each year. The UK is one of the world’s largest exporters of ivory items, with 50 elephants dying for ivory daily.

“We are thrilled with the news.We have to protect elephants now for the sake of future generations as time is running out for vulnerable elephants whose populations are being decimated on an unprecedented scale. We must save the iconic elephant from the threat of extinction. We urged for the ban in our animal welfare Blueprint document ‘ Brexit: Opportunities For Animal Welfare’ ‘which we presented for the Prime Minister at No10 Downing Street with our Patron Sir Roger Gale MP in January 2017 and in our September 30th 2017 letter to the Prime Minister and Michael Gove, signed by Conservative MPs and the Chairmen of the Conservative Women’s Organisation and the Conservative Environment Network.

The Illegal Wildlife Trade conference takes place in October in London in October and will provide a global platform to demonstrate the UK’s commitment to protecting vulnerable elephants and wildlife worldwide.

Lorraine Platt is a Board Member of Save the Asian Elephants( STAE) and added:

“It’s important that the UK also plays a leading role to protect vulnerable Asian elephants from poaching and cruel abuse. Asian Elephant numbers have plummeted from millions to only tens of thousands today and need action now.” 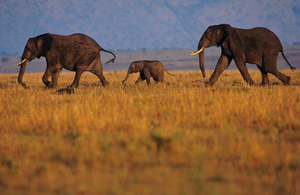 A ban on ivory sales in the UK will be introduced as plans published to protect elephants.

The UK will introduce a ban on ivory sales, Environment Secretary Michael Gove confirmed today as he set out our plans to help protect elephants for future generations.

The Government is publishing the response to its consultation on a UK ivory sales ban, and confirming robust measures that will be brought into force through primary legislation.

The ban will cover ivory items of all ages – not only those produced after a certain date. The maximum available penalty for breaching the ban will be an unlimited fine or up to five years in jail.

There were more than 70,000 responses to the consultation, with over 88 percent of responses in favour of the ban.

The number of elephants has declined by almost a third in the last decade and around 20,000 a year are still being slaughtered due to the global demand for ivory.

Ivory should never be seen as a commodity for financial gain or a status symbol, so we will introduce one of the world’s toughest bans on ivory sales to protect elephants for future generations.

The ban on ivory sales we will bring into law will reaffirm the UK’s global leadership on this critical issue, demonstrating our belief that the abhorrent ivory trade should become a thing of the past.

In line with the approach taken by other countries, including the United States and China, there will be certain narrowly-defined and carefully-targeted exemptions for items which do not contribute to the poaching of elephants.

The exemptions have been tightened since the Government published its proposals for consultation, but still provide balance to ensure people are not unfairly impacted:

By covering ivory items of all ages and adopting these narrow exemptions, the UK’s ban will be one of the toughest in the world. The US federal ban exempts all items older than 100 years as well as items with up to 50% ivory content. The Chinese ban exempts ivory “relics”, without setting a date before which these must have been produced.

The UK is already showing global leadership in the international fight against the illegal ivory trade, and at a recent European Environment Council called for EU member states to follow the Government’s lead and ban commercial trade in raw ivory – which is already banned in the UK – within the EU as soon as possible.

A ban on ivory sales in the UK would build on government work both at home and overseas to tackle poaching and the illegal ivory trade. The UK military is training African park rangers in proven poacher interception techniques in key African countries, and Border Force officers share their expertise in identifying smuggled ivory with counterparts worldwide to stop wildlife trafficking.

We are delighted that the Government has listened to our concerns and given the overwhelming public response to their consultation is now moving decisively to introduce tough legislation to ban the trade in ivory in the UK.

The narrowly defined exemptions are pragmatic. The ban will ensure there is no value for modern day ivory and the tusks of recently poached elephants cannot enter the UK market. We welcome the fact that Ministers are sending such a clear message to the world that the illegal wildlife trade will not be tolerated and every effort will be made to halt the shocking decline in Africa’s elephant population in recent years.

Around 55 African elephants are killed for their ivory a day, their tusks turned into carvings and trinkets. This ban makes the UK a global leader in tackling this bloody trade and it’s something WWF has been fighting hard for.

But if we want to stop the poaching of this majestic animal, we need global action. We hope the UK will continue to press countries where the biggest ivory markets are, most of which are in Asia, to shut down their trade too.

Legal domestic ivory markets are intrinsically linked to the illegal ivory trade that is driving the current poaching crisis. With almost 20,000 elephants poached in the last year, it is vital that countries take significant steps such as those outlined by the UK government today to close their markets and help make the trade in ivory a thing of the past. No one in the UK today would dream of wearing a tiger-skin coat. Thanks to this move, in a few years’ time we believe the same will be true for the trade in ivory.

This is a significant day for the future of elephants. The UK government has taken a momentous step. The proposed ban, with its narrow and clear exemptions, places the UK at the forefront of the international determination to halt the extermination of elephant populations by banning trade in ivory. The Secretary of State for DEFRA has shown clear leadership in demanding legislation whilst there is still time to secure a future for elephants in the wild.

The end of the ivory trade in the UK removes any hiding place for the trade in illegal ivory, and sends a powerful message to the world that ivory will no longer be valued as a commodity. Ivory belongs on an elephant and when the buying stops the killing will stop.

As profits become ever greater, the illegal wildlife trade has become a transnational organised enterprise, estimated to be worth up to £17 billion a year.

The further decline of elephants would also deprive some of the poorest countries in the world of their valuable natural capital, affecting economic growth and sustainable development.