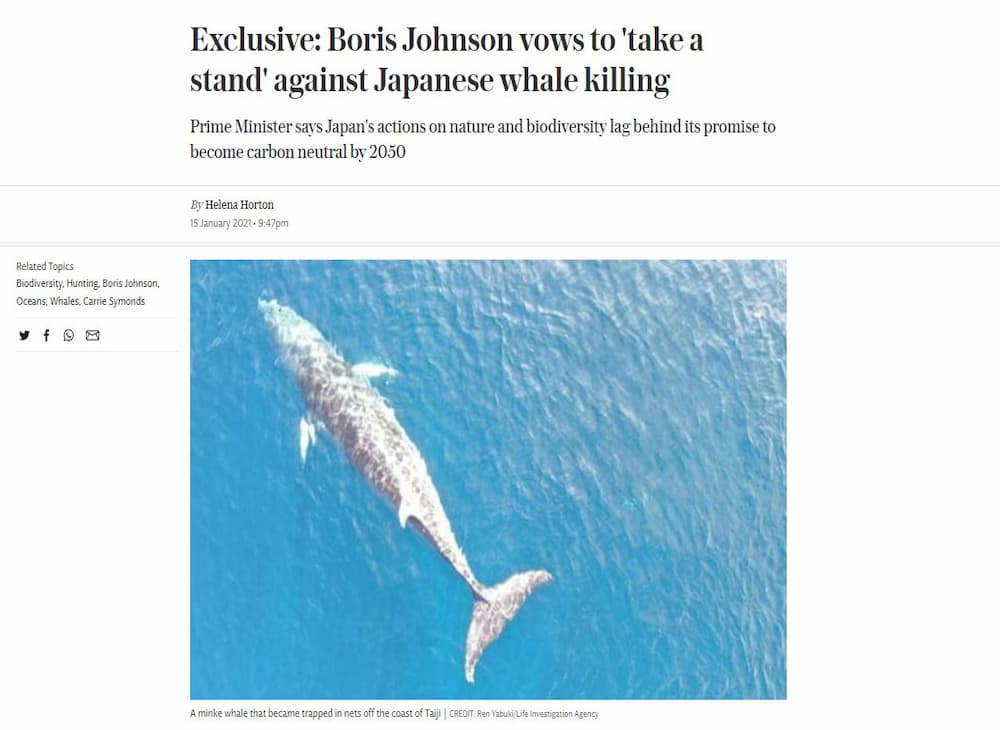 Prime Minister says he is ‘taking a stand’ against cruel Japanese whale killing.

A minke whale that became trapped in nets off the coast of Taiji.
Boris Johnson has told The Telegraph he will “take a stand” against “cruel” Japanese whale killing after the tragic plight of a minke whale captured the world’s attention. The young whale was seen struggling for life for 19 days in a net off the coast of Taiji before being drowned by fishermen earlier this week. Onlookers said the whale took 20 minutes to drown. The creature’s meat has now been sold at local markets.

Mr Johnson suggested he would be raising what happened when world leaders meet for an environment summit at COP26 in Glasgow later this year. The Prime Minister pointed out that despite Japan’s promise to become carbon neutral by 2050, its actions on nature and biodiversity were lagging behind.

Japan has come under fire from environmentalists across the world for its annual dolphin cull and the fact that it resumed its commercial whaling operations in 2019, citing “tradition”.

“At a time when we are already seeing the tragic and irreversible destruction of our natural world, with the sea increasingly pumped full of plastics and climate change threatening entire ecosystems, it is more important than ever to take a stand against the cruel practice of whaling. I look to Japan, a world leader on climate change and free trade, to stand with me in the fight against the killing of these beautiful mammals and take steps to help preserve our precious marine life for future generations. As the UK prepares to host the COP26 summit this year and we continue to drive forwards action to reduce global emissions, we must remember that our success in tackling climate change is inherently bound up with restoring biodiversity. Let us not imagine a world where our children and grandchildren do not know the song of the humpback whale. We must all come together to respect and protect one of mother nature’s greatest treasures.”

The Foreign Office is also raising the issue with counterparts in Japan, and Lord Goldmsith, the international marine minister, said:

“The UK is a world leader on marine protection, including protection for iconic marine wildlife such as whales – which is why we have condemned commercial whaling and urge nations around the world to join us in protecting these majestic creatures. We strongly expressed the UK’s desire to see the whale freed, and the Japanese government is in no doubt as to the strength of feeling in the UK on this issue. News of the minke whale’s death is heartbreaking.”

There have been tensions between the UK Government and Japan since Tokyo withdrew from the International Whaling Commission, which banned hunting. It now allows its fleets to catch hundreds of whales a year.
Mr Johnson has previously admonished the Japanese government in private for resuming whaling, and is understood to be passionate about the issue. However, this is the first time he has publicly criticised Japan for the practice.

His fiancee, Carrie Symonds, and his father, Stanley Johnson, have both been seen at anti-whaling marches. In 2019, Ms Symonds said whaling is “cruel beyond belief”.

When Environment Secretary in 2018, Michael Gove spoke out against Japan withdrawing from the international agreement, saying he was “extremely disappointed”.