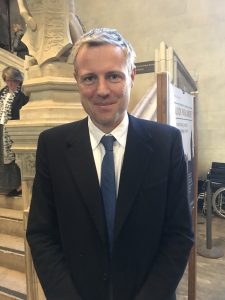 Zac Goldsmith MP will play a key role in the preparations for an international conference about the illegal wildlife trade, held in London in October 2018.
Foreign & Commonwealth Office

On Tuesday 3 July, the government announced that Zac Goldsmith MP will play a key role in the preparations for an international conference about the illegal wildlife trade.

As Champion for the Illegal Wildlife Trade Conference being hosted in London in October, Mr Goldsmith will help bring together global leaders, the private sector and wildlife experts in the fight against the illegal wildlife trade, building support and partnerships among external stakeholders before the conference.

Foreign Secretary Boris Johnson said:
The London conference is a once in a generation opportunity to produce a seismic shift in global attitudes to better protect the world’s most iconic species from the threat of extinction.

Zac has the extensive knowledge of, and passion for, environmental issues to make the London Illegal Wildlife Conference 2018 in October as ambitious and successful as possible.

Environment Secretary Michael Gove said:
We are introducing one of the world’s toughest bans on ivory sales and showing global leadership through international funding for enforcement projects.

But wildlife crime does not respect borders. We must share skills and expertise worldwide. That’s why the London conference will be crucial in tackling international issues that allow the vile and illegal trade in wildlife to continue.

Zac will bring tremendous energy and drive to this new role. Through his extensive knowledge and experience of working with international environmental groups I am sure he will help to make the conference a huge success.

International Development Secretary Penny Mordaunt said:
Protecting endangered species and tackling the criminal activity that threatens them also delivers opportunities for people to be lifted out of poverty.

The British public care deeply about this issue, and UK aid is working to eradicate the trade in illegal wildlife which fuels corruption and insecurity. This is a win for developing countries, a win for the UK and a win for our planet.

The illegal wildlife trade is not only taking countless species to the brink of extinction, it is a serious organised crime and fuels some of the world’s worst organisations. The UK has led global efforts to tackle it, but the problem continues to grow and now is the time for us to significantly step up our efforts. I am thrilled to have been asked to play a part in making that happen.

The Illegal Wildlife Trade is a serious criminal industry, estimated to be worth between £7 billion and £17 billion a year.

The UK government has committed £26 million to tackle the Illegal Wildlife Trade. This includes around £14 million through the joint DFID/Defra Illegal Wildlife Trade Challenge Fund. The fund has been allocated to 47 projects since 2015 and demonstrates the UK government’s commitment to tackling the wider illegal trade in wildlife. Projects that have received support encourage the development of sustainable livelihoods, strengthening law enforcement, ensuring effective legal frameworks and reducing demand for products made from illegal flora and fauna. 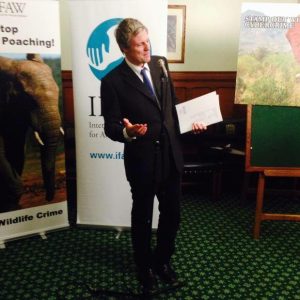 Mr Goldsmith has campaigned for many years on issues related to animal welfare through the Ecologist Magazine, which he edited for a decade, and as an MP since 2010. He is a member of the Environment Audit Committee and during his political career animal welfare has been a strong focus for him.

The Illegal Wildlife Trade Conference will be co-hosted by the FCO, Defra and DFID between 11 and 12 October. https://www.gov.uk/government/topical-events/london-conference-on-the-illegal-wildlife-trade-2018