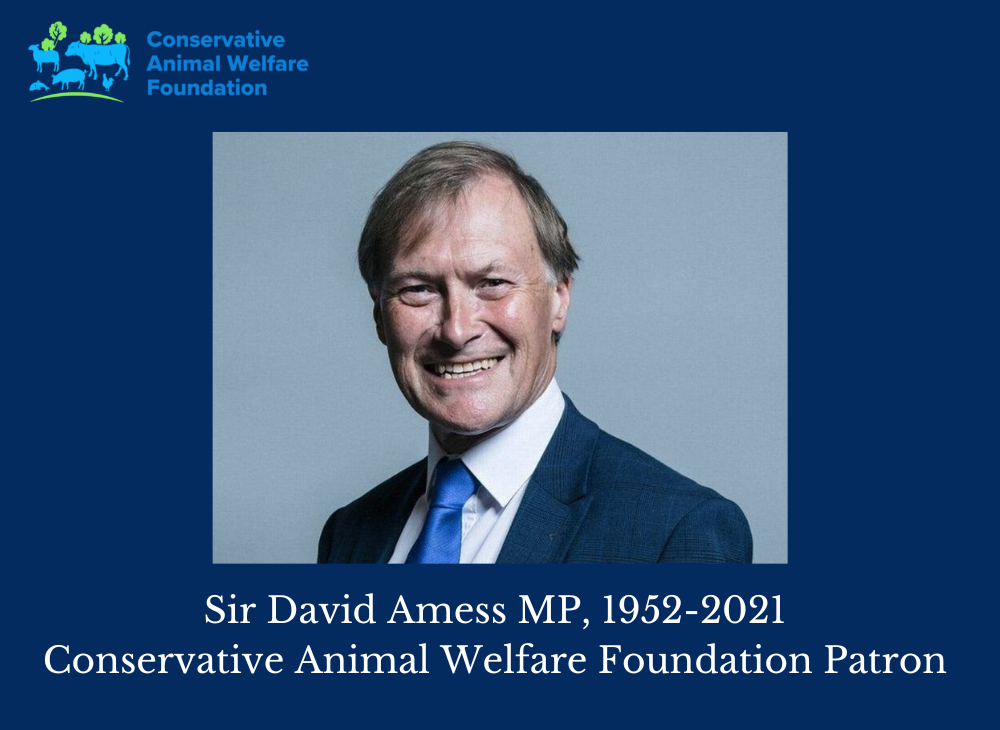 One year on from the passing of our Patron Sir David Amess MP, Conservative Animal Welfare Foundation remembers his life and legacy as a dear friend and champion for animal welfare.

One year on from the passing of our Patron Sir David Amess MP, Conservative Animal Welfare Foundation remembers his life and legacy as a dear friend and champion for animal welfare.

As we reflect on the last year, we cannot help but be saddened that Sir David was not here to celebrate animal welfare milestones with us. Amongst other achievements, we know he would have been delighted to see the Animal Welfare (Sentience) Act become law.

We continue to honour the campaigns he worked so tirelessly for over decades. Sir David was passionate about ending live exports for fattening and slaughter, something he spent years drawing attention to in Parliament. We hope this will soon be banned in the Kept Animals Bill due to return to Parliament imminently.

Perhaps the most significant campaign close to Sir David’s heart was to ban the use of pig farrowing crates. Before his death he led a Ten-Minute Rule Bill- the Pig Husbandry (Farrowing) Bill, to end cruel farrowing crates for sows. In tribute to Sir David, Conservative Animal Welfare Foundation will be launching a new campaign in the coming weeks, The Crate Escape, to push for this change. We believe it would be an everlasting tribute to see an end to this practice.

Last week at Conservative Party Conference we held our Word Animal Day reception in memory of Sir David. We were touched by the many tributes to his kind character, brilliant sense of humour, and lifetime of hard work, from MPs including our host Jane Stevenson, Mark Francois, Andrea Jenkyns, and CAWF Patrons Anna Firth and Theresa Villiers, as well as world-renowned explorer Sir Ranulph Fiennes.

Sir David was a champion for the people he represented, and his country. In the year since his death, we miss him as much as ever. His kindness, compassion, and optimism continue to be missed by his family, friends, and constituents.

As Mark Francois told guests last week, “we have lost a champion, but we have not lost a legacy”.