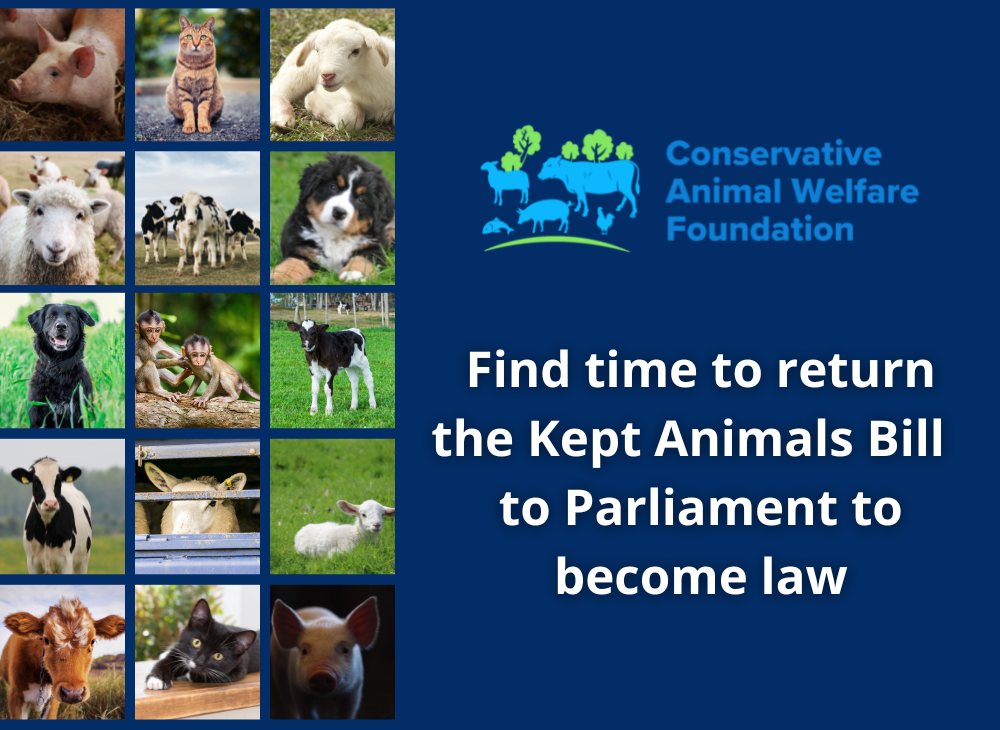 The Conservative Animal Welfare Foundation (CAWF) has welcomed the Westminster Hall Debate led by Conservative MP Elliot Colburn yesterday relating to the petition titled: ‘Find the time to take the Kept Animals Bill through Parliament and make it law’ which received over 107,000 signatures from the UK public.

The Conservative Animal Welfare Foundation (CAWF) has welcomed the Westminster Hall Debate led by Conservative MP Elliot Colburn yesterday relating to the petition titled: ‘Find the time to take the Kept Animals Bill through Parliament and make it law’ which received over 107,000 signatures from the UK public.

A significant number of MPs contributed to the Westminster Hall Debate yesterday afternoon, including Conservative Animal Welfare Foundation Patrons Tracey Crouch MP, Sir Roger Gale MP, Henry Smith MP, and Chris Loder MP. Former Secretary of State for Defra George Eustice MP also supported the debate and highlighted the Conservative Manifesto commitments the Bill delivers, such as ending live animal exports for fattening and slaughter. In addition, there was a strong cross-party presence which saw contributions from Labour, the Liberal Democrats, the SNP and DUP all united in calls to return the Kept Animals Bill.

Ending live exports for fattening and slaughter is a central CAWF campaign and one which aligns with public opinion. When animals are exported overseas for slaughter and fattening, they suffer greatly during long, gruelling journeys. Overcrowding issues can result in animals unable to lie down and may be trampled or die in transit. They can suffer extremes of temperature and often without sufficient food, water, and rest.

The Kept Animals Bill would also:

Conservative Animal Welfare Foundation has been calling for the Bill to return so it can become law. Last month it became over a year since the Kept Animals Bill had its Committee Stage in Parliament.

Further information on the Kept Animals Bill can be found in the Conservative Animal Welfare Foundation briefing here and on our website here. The full debate can be read here.

Lorraine Platt, Co-Founder of Conservative Animal Welfare Foundation, commented: “We were pleased to see so many MPs contributing to today’s debate, particularly our Patrons Tracey Crouch, Sir Roger Gale, Henry Smith, and Chris Loder. It is clear there is strong political support across all parties for bringing back this important Bill which will end animal exports for fattening and slaughter, amongst other measures.

“We are, however, disappointed that parliamentary time was spent debating the return of a Bill which delivers key Conservative Manifesto commitments, rather than returning it to become law. It has been over a year since the Kept Animals Bill last progressed, and we are concerned that it may be lost altogether. We welcome Minister Mark Spencer’s words in response to yesterday’s debate where he committed to returning this vital piece of legislation, and invite him to confirm the timetable for this as soon as possible.”

Conservative Animal Welfare Foundation Co-Founder Lorraine Platt’s comments in advance of the debate can be read in the Mail (‘Senior MPs fears that Rishi Sunak has ‘quietly shelved’ Boris’ law to fight puppy-smuggling despite manifesto commitment‘) and the Sun (‘PETS AT RISK: New laws to jail dog-nappers to be delayed and may even be shelved for good‘).