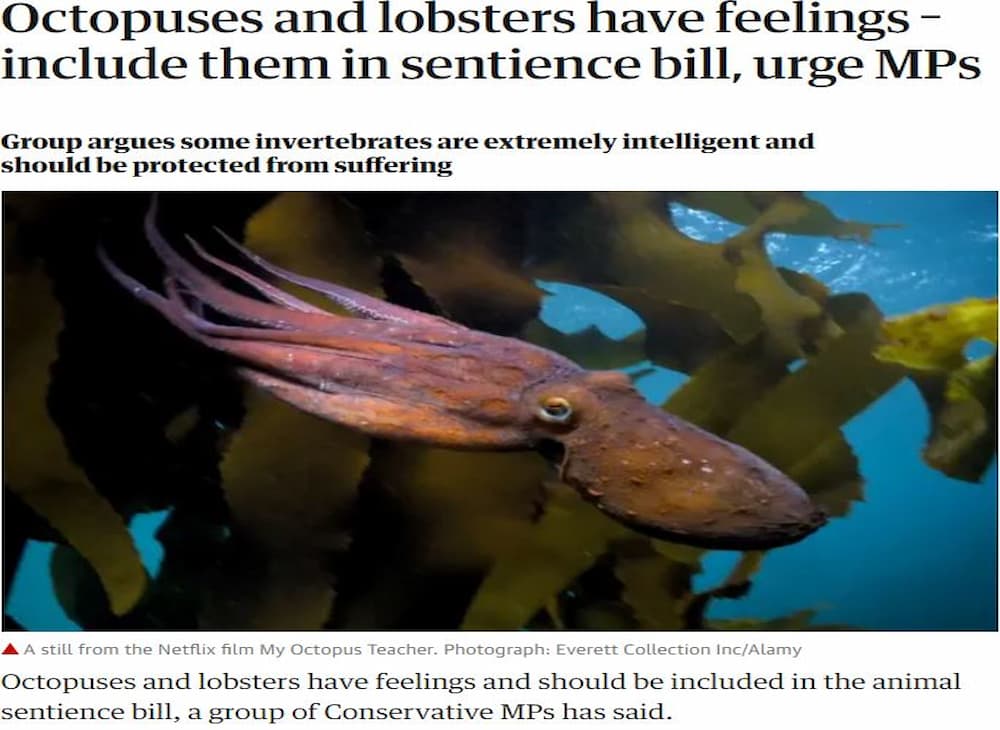 Octopuses and lobsters have feelings – include them in sentience bill, urge MPs

Octopuses and lobsters have feelings and should be included in the animal sentience bill, a group of Conservative MPs has said.

Octopuses and lobsters have feelings – include them in sentience bill, urge MPs | Animals | The Guardian

Octopuses and lobsters have feelings and should be included in the animal sentience bill, a group of Conservative MPs has said.

The influential Conservative Animal Welfare Foundation (CAWF), which counts Carrie Johnson and the environment minister Lord Goldsmith as patrons, has been meeting with the government to ask them to recognise the sentience of invertebrates.

The bill, now at second reading stage in the House of Lords, recognises that fish and other vertebrates feel pain and should be protected, where possible, from suffering. However, the group of MPs has argued that some invertebrates are extremely intelligent and should be included in the bill.

The report, backed by MPs including Sir David Amess and Sir Roger Gale, argues that these animals are discriminated against in legislation because their “neurological architecture differs from our own”.

It concludes: “Common arguments against crustacean and cephalopod sentience focus on distinctions between these animals’ anatomy and human anatomy (such as that they process information outside the brain, eg in ganglions). However, this anthropocentric view fails to capture what it means for an animal to be sentient.

It is well known that octopuses are intelligent, and they have been found to be excellent at solving puzzles. The Netflix film My Octopus Teacher, released last year, brought the issue to a large audience, as hundreds of thousands of people were charmed by the relationship between human and inquisitive octopus.

Lorraine Platt, founder of CAWF, said: “All but a very small minority of scientists agree these are sentient animals capable of pain and suffering. It’s very important they are kept in the animal sentience bill. My Octopus Teacher is a very moving film about a female octopus, about how clever she is, how she can avoid predators, sharks, on a daily basis. If I feel this way I am sure many others feel the same way.

“Why are they excluded? I am sure there are concerns from industry because it throws light on how these animals are killed, stored, transported. This quantifies why they should be included in the bill. We are talking about millions of animals here. They are afforded protections in Norway, Sweden and Austria but not here.”

The new animal sentience legislation will mean that any new government policy will have to take into account that vertebrate animals can experience feelings including pain or joy. This will be decided by a committee made up of animal experts from within the field.

A spokesperson for the Department for Environment, Food and Rural Affairs said: “We’re proud to have some of the highest animal welfare standards in the world, and we are fully committed to strengthening them further to ensure all animals avoid any unnecessary pain, distress or suffering.

“We have already commissioned an independent external review of the available scientific evidence on sentience in the class Cephalopoda, which includes octopus, cuttlefish and squid – and we will carefully consider the results of this review.”

When you think of an octopus or lobster, what comes to mind? Seafood or intelligent marine life?

A group of Conservative MPs think it’s the latter and argue they should be included in a law to protect animals.

The Animal Welfare (Sentience) Bill recognises animal sentience – which is the capacity of animals to have feelings, including pain and suffering.

It currently says fish, and other vertebrates which feel pain, should be protected as much as possible.

Animals like lobsters and octopus are not currently protected by the bill because as invertebrates, their body is different to ours, so they aren’t thought to have those complex feelings, says a report by the Conservative Animal Welfare Foundation (CAWF).

The report says arguments against recognising these species focuses on physical differences between these animals and humans – but this fails to understand what it means for an animal to have feelings.

It says those species “undoubtedly experience the world in extremely different ways to ourselves,” but what matters is whether they feel pleasure and pain.

‘They should be protected more’

“Animals have helped us quite a lot, so we should return the favour and help them,” marine biologist Emily Sullivan tells Radio 1 Newsbeat.

The 25-year-old manages the research aquarium at the Marine Biological Association, which means she’s worked with lots of invertebrates such as octopus, lobster, crabs, crayfish and cuttlefish.

She feels they should be recognised in the bill – which is currently in the House of Lords.

There are already regulations around using animals in scientific research, including octopus and squid – though not all species.

“The aim of that is to minimise pain, stress and suffering in research,” Emily says.

“I personally do think they can recognise and feel pain, so should be protected more.”

Having interacted with lots of these species, Emily feels they are self-aware and understand what’s around them.

“It definitely varies between species, and it’s not the same level for all of them. But for example cuttlefish, related to octopus, are very intelligent,” she says.

“The ones we have here, when you walk past their tank they come up and have a look, see what you’re doing and definitely respond. You can see them watching you.”

Emily feels it’s clear when they feel pain or suffering “because their behaviour changes a lot”.

“They become quite lethargic and their appetite changes. That’s true for a lot of the animals, including crabs and lobsters.”

Emily says including them in the bill will have a big impact on the animals themselves because “they aren’t really protected or regulated much”.

The report found the UK fishing fleet lands more than 420 million of species such as squid, octopus, crabs and lobsters each year, and says “with so many individuals at stake”, it’s important to be cautious even if there’s not complete certainty these animals are sentient.

The new animal welfare legislation will mean any new government policy will have to take into account that vertebrate animals can experience feelings including pain or joy.

That will be decided by a committee made up of animal experts from within the field.

A spokeswoman from the Department of Environment, Food and Rural Affairs told Newsbeat the UK was “proud to have some of the highest animal welfare standards in the world”.

“We are fully committed to strengthening them further to ensure all animals avoid any unnecessary pain, distress or suffering,” she said.

She added there is already a review on the feelings of species such as octopus, cuttlefish and squid and the government will “carefully consider the results” of this.

Other articles on this report:

Do octopuses and lobsters have feelings? (tekcrispy.com)

We make the National Geographic Magazine… all be it in Spanish