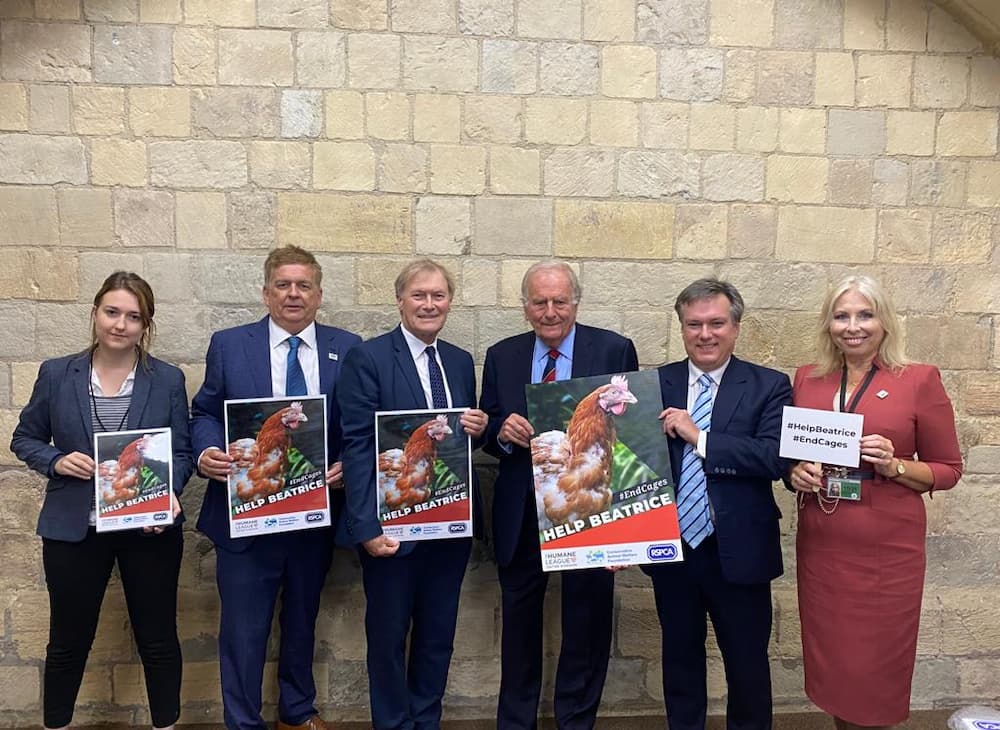 Conservative Animal Welfare Foundation Patron, Henry Smith MP, brought a Ten Minute Rule Bill before the House of Commons to end cages for laying hens. The Bill passed it's first reading. The second reading will be held on Oct 22nd 2021

The Humane League UK and the Conservative Animal Welfare Foundation have launched a petition calling on the Government to end the caging of hens, after a Ten Minute Rule Bill was successfully introduced in Parliament yesterday.

16 million hens are currently still raised in cages every year across the UK, restricting their movement and expression of instinctive behaviour.

The petition asks for cages to be phased out no later than 2026, and follows Henry Smith MP’s presentation of his private members’ bill on the matter yesterday, which passed to a second reading on the 22nd of October.

Cordelia Britton, Head of Campaigns at The Humane League UK, said: “As a nation of animal lovers and chicken-keepers, the fact we still confine millions of hens in cages is really out of step with our values as a country. There are no more excuses – the time to ban caging hens is now.”

Lorraine Platt, co-founder of the Conservative Animal Welfare Foundation, said: “The British public feels strongly about protecting the welfare of farmed animals. Consumer polling shows more than three in four of us would like to see banning cages made a priority, and today’s petition launch marks an important step in demonstrating this to our political leaders.

“It is our hope that in banning cages we can help millions of hens like Beatrice avoid spending their lives in confined, cramped spaces where they have hardly enough room to spread their wings.”

The petition highlights the plight of Beatrice, a hen who spent her first 18 months living in a cage. Beatrice suffered from plumage loss and became weakened in the cage, and is now recovering at her rescuer’s home.

#BeatricesBill was supported by MPs Tracey Crouch, Sir Roger Gale, Sir David Amess, Lisa Cameron, Caroline Lucas, Christian Wakeford, John Baron, Rosie Cooper and Giles Watling.  There were no opposing speeches, so it was introduced without a vote. It is now eligible for a second reading, which is the next step to becoming law.

Companies like Burger King and all major UK supermarkets have committed to remove eggs from caged hens in their supply chains by 2025. Despite this, up to 8 million hens could still be caged every year in the country.

Switzerland, Luxembourg and Austria have already banned caging hens, while bans are on the way in Germany, Belgium, Czechia and Slovakia. Seven US states have already phased out cage-egg production.

Britton continued: “The UK risks lagging behind if we don’t act to ban cages now. The European Parliament and Commission both recently supported a cage ban and even the US is phasing out caging hens in certain states.”

Science shows that caging hens is detrimental to their health and welfare: they have limited space to move around and get away from other birds, and their ability to perform innate behaviours such as dust-bathing, perching, foraging and nesting is severely restricted. The public is asked to sign the petition at www.change.org/p/the-uk-governments-uk-governments-end-cruel-cages-for-hens