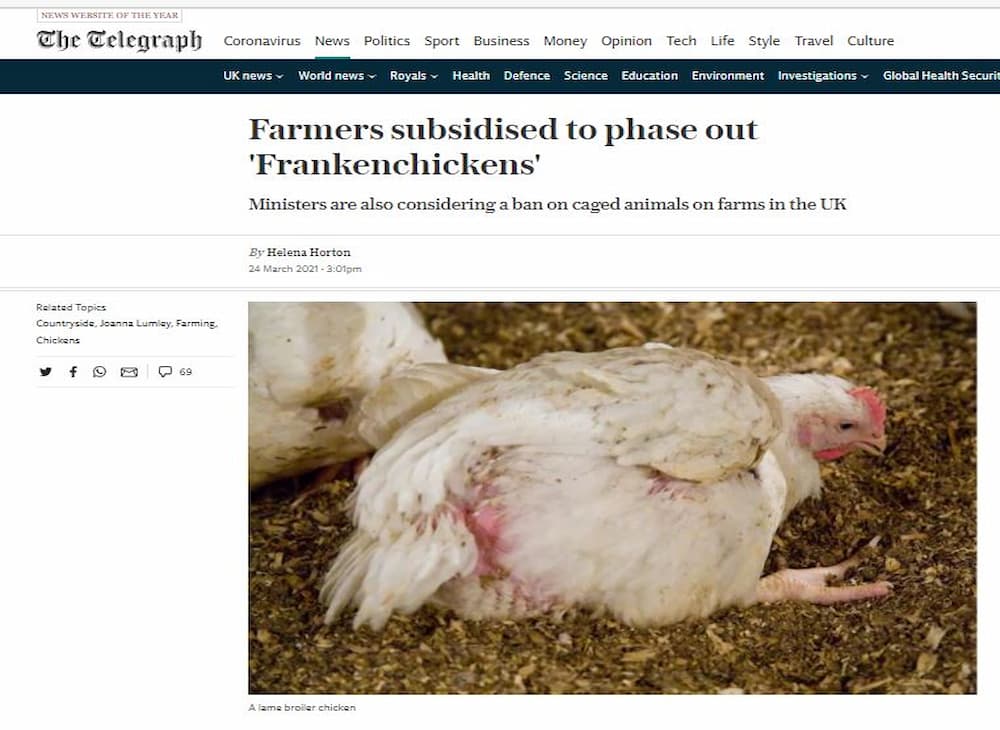 Ministers are also drawing up plans to clamp down on cages used in farming, which are still used for young broiler chickens, hens, pigs, and game birds. They hope to announce new laws as part of a raft of animal welfare measures to show that the UK can commit to higher standards now it has left the EU.

Our research report urging for Mandatory Labelling sent to DEFRA, Ministers and MPs in 2020

‘Overweight ‘frankenchickens’ are to be phased out under government plans to pay farmers to breed old-fashioned, slow-growing birds.

Ministers are also drawing up plans to clamp down on cages used in farming, which are still used for young broiler chickens, hens, pigs, and game birds. They hope to announce new laws as part of a raft of animal welfare measures to show that the UK can commit to higher standards now it has left the EU.

Currently, certain breeds of fast-growing chicken are allowed in the UK and account for many lines of cheap meat in some supermarkets. These broilers are bred to produce the maximum amount of meat in the minimum amount of time, which means their legs often cannot support their weight, causing lameness.

BBC Springwatch presenter Chris Packham called for a ban on these animals, and said: “Every year, millions upon millions of chickens are bred to become oversized FrankenChickens, crammed into bleak, overcrowded sheds, and slaughtered at just a few weeks old. As a bird lover, I despair at the thought of these gentle, intelligent, and sensitive animals forced to endure such suffering.”

Actress and campaigner Joanna Lumley told The Telegraph that supermarkets should stop selling this cut-price chicken.

She explained: “Be sure that if you buy cheap chicken it will have been reared in appalling conditions. Please don’t become indifferent to cruelty: please don’t be part of this chain of suffering.  Factory farming is one of the greatest evils of modern life: have nothing to do with it, starting now.”

The majority of chickens raised for meat are bred to grow at an unnatural speed, reaching slaughter weight in just a matter of weeks. They can suffer painful lameness and even heart attacks because of their fast growth, and are raised in cramped conditions.

This  factory farming, where chickens are also kept in dim warehouses to promote growth, has led to a rise in cheap chicken in recent decades. According to analysis by company Farmdrop, the average cost of a whole chicken weighing a minimum of 1.35kg from four of the leading supermarkets is £3.15, which is less than the average pint, at £3.47. Free-range chicken accounts for just 5 per cent and organic 1 per cent of UK chicken production.

Vets and other animal welfare experts have drawn up a Better Chicken Commitment, which lays out measures to improve the lives of the birds, including a ban on certain breeds which face severe health problems, as well as a minimum space allowance in sheds. Only Marks & Spencer and Waitrose & Partners have committed to this, with all other leading supermarkets falling behind.

“I think this is the biggest cause of hidden animal suffering in Britain,” Mr Packham added, “Chickens  outnumber all the wild birds in the country but we never see them – because they’re suffering behind the closed doors of factory farms.”

Ministers have said they plan to tackle the chicken welfare issue through a mixture of bans and incentives, and are considering bans on cramped conditions as well as committing to pay farmers to grow high-welfare breeds which have the freedom to roam, peck and scratch outside.

A Department for Environment, Food and Rural Affairs spokesperson said: “We have some of the highest animal welfare standards in the world and a strong track record for raising the bar when it comes to welfare measures, such as banning battery cages for laying hens, sow stalls and veal crates – and introducing CCTV in all slaughterhouses in England.

“Now the transition period is over we will continue to build on this, and we are currently examining the evidence around the use of cages for farm animals.”’