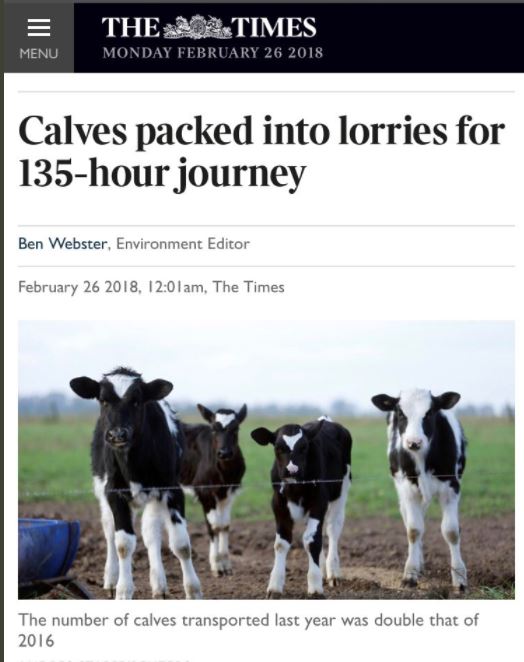 More than 5,000 very young calves discarded by the dairy industry were packed into lorries last year and sent on journeys from Scotland to Spain lasting up to 135 hours, government documents have revealed.

The live export of calves almost doubled compared with 2016 and may continue indefinitely because of a dispute between Westminster and the Scottish government over whether it should be banned after Brexit.
Some of the unweaned male calves will not survive the journey and the remainder are likely to spend the rest of their short lives in barren pens, which would be illegal in the UK, before being slaughtered for veal or beef, according to the animal welfare group Compassion in World Farming. A petition calling for the live export of farm animals to be banned after Brexit will be the subject of a debate in parliament today. More than 13,000 sheep but no calves were exported from England last year.

EU rules on exporting live animals allow them to be sent on very long journeys if they are given occasional rest stops, some of which may involve simply stopping in a layby for an hour with calves kept in sweltering conditions.

Michael Gove, the environment secretary, has said that he is considering a ban on live exports but it may not apply to calves sent overseas from Scotland. Last year’s Conservative manifesto said: “As we leave the European Union we can take early steps to control the export of live farm animals for slaughter.” The calves are not sent from Scotland for immediate slaughter but for fattening.

Fergus Ewing, the Scottish government’s rural economy secretary, said this month that Scotland would not take part in any ban on exports of live animals, saying that it would be economically damaging for farmers. There is little demand for veal in the UK and farmers can get a higher price by selling their male calves on the Continent.

A Scottish goverment spokesman said: “The transport of animals from Scotland is strictly controlled, according to EU rules and standards, to ensure the best possible welfare during journeys.”
A spokesman for Mr Gove said: “Banning live exports for animal welfare reasons is a devolved matter. While Westminster has the power to legislate in these areas, this would be highly unusual and the expectation is for joint consideration and approval.

“We are keen to work with devolved administrations as we bring forward these reforms.”

MPs will debate the petition to end live exports for slaughter at 4.30 pm on Monday 26 February.

Conservative Animal Welfare Foundation MP Patrons will call for an end to live exports for slaughter.

Please sign petition to end this vile trade here:  https://petition.parliament.uk/petitions/200205 We are close to  reaching the 100,000 target and need 10,000 more signatures