Thousands of baby Irish calves are cruelly shipped to veal farms in the Netherlands every month without proper resting time, a video investigation has exclusively revealed.

Many of the calves, aged just two weeks, arrive in the Netherlands exhausted and spend their short lives on concrete floors without bedding before they are slaughtered at eight months old for the European veal market.

Up to this point, they are deprived of iron to ensure their flesh remains pale and soft, the desired texture for the restaurant delicacy.

The Department of Agriculture has reviewed the footage and has fined several of the hauliers for failing to give the calves adequate resting time on their journey.

‘Sanctions have been applied to those who were found to have breached regulations,’ it said in a statement to Extra.ie.

The investigation – by the Eyes On Animals lobby group, whose footage was uploaded to YouTube yesterday – tracked thousands of newborn Kerry calves on their journey to Dutch veal farms. According to the investigators, and documents released by the Department of Agriculture, many of the calves were transported from a collection centre in Killarney to the ferry at Rosslare last March. Some 4,500 calves were transported on 18 trucks that rolled onto the Rosslare-Cherbourg ferry.

The calves in question were still too young to eat solid food, and got water by sucking on rubber-covered metal nipples on the trucks. The Eyes On Animals footage appears to support the group’s claim in its report that the calves on the first level of the three levels on the trucks did not have enough headspace, with their backs almost touching the ceiling.

The young cattle remained on the trucks for the 19-hour ferry journey to Cherbourg in France.

They were supposed to stop at an unloading centre in Cherbourg to rest under European Union regulation 1/2005, which says that, after 19 hours of transportation, unweaned calves must be unloaded, rested and properly fed.

Some were taken off at Cherbourg in compliance with the law, but the majority were hauled an additional five hours to a large agriculture control centre in Abbeville in north east France, where the calves were unloaded.

After 12 hours, they were transported to a large veal farm near De Rips in the southern Netherlands. Their total journey time was 56 hours and 35 minutes – 13 hours more than the maximum transport time under the EU regulation.

The Department of Agriculture, which promotes Irish veal abroad, accepts that this is a violation of the law. However, several hauliers told Eyes On Animals that their journey log indicated that the control centre in Abbeville has been approved by Irish authorities.

This was also stated to Extra.ie by one of the haulage companies involved, which said there had ‘never been a problem’ and that it passed on documentation every month to the Department of Agriculture indicating that the calves’ first stop was in Abbeville.

The investigation ends in De Rips in the Netherlands, where thousands of calves are unloaded into large industrial pens.

The exposé highlights how there is no bedding for tiny calves in these cramped pens, and their waste drops through slats into tanks below. Furthermore, the pens have no stimulation and the calves only have enough room to move a few steps. In the footage, many of the calves can be heard loudly calling for their mothers, a sound known in agriculture as ‘lowing’.

After several months of being huddled together, the front of the pens open and the calves are housed together until they are slaughtered at eight or nine months. They are fed a low-fibre, low-iron diet to keep their flesh soft and pale. White is the desired colour for the veal market.

The calves are then slaughtered in special veal abattoirs.

Most of the Netherlands veal production is for export as the majority of Dutch supermarkets have banned it as a cruel practice.

Extra.ie asked a Department veterinary inspector to view the footage. He said the calves were ‘about three weeks old’ and were still suckling from their mothers. He said it was permitted under EU law to ship them abroad at this stage. He also confirmed that the calves on the trucks and in the footage from the veal farms in the Netherlands were making the familiar ‘lowing’ sound when they are seeking their mothers.

According to Bord Bia figures, there has been a major increase in the number of calves exported from Ireland during the first five months of this year. A total of 128,673 calves were exported up to May 27 – an increase of 35% on the same period last year. The majority go to the Netherlands and Spain.

The Department of Agriculture said in a statement that violations are not normal in calf exports.

‘In general, live animal exports are uneventful, with the animals arriving in good condition at points of destination,’ it said.

‘On the few rare occasions where problems arise during transport, or where allegations of non-adherence to regulatory requirements during transport are brought to the Department’s attention, a thorough investigation takes place into the circumstances of the journeys undertaken.’ It added that such investigations ‘are often carried out in conjunction with the French authorities when the allegations relate to non-compliances whilst on the Continent.

Sanctions have been applied to those who were found to have breached regulations.’

Conservative Animal Welfare Foundation urges for a ban on live animal exports for slaughter and fattening to prevent animals being exported to farm systems which are illegal in the UK such as veal crates. 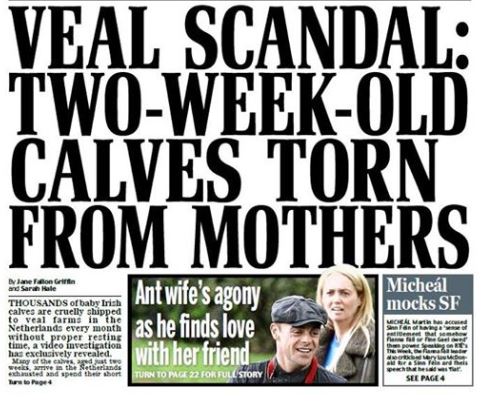