A new kind of farming to transform the way meat is made?

The Future of Meat? A new kind of farming to transform the way meat is made- Animal tissue grown in a laboratory?

Many people enjoy eating meat but don’t like the negative side effects of intensively farmed meat production which impacts upon the welfare of tens of billions of farm animals, which takes up wasted energy and resources and the amount of chemicals, including anti-biotics, growth hormones and pesticides used.

Right now, a small number of new organisations are starting up to create a new kind of farming without the drawbacks of conventional meat production. The concept highlights a new production of farming meat directly instead of farming animals to obtain their meat. It involves producing meat from real meat cells, in a process which is very different from conventional agriculture yet produces 100% real meat. It is described as ’cultured meat’ ‘lab meat’ or ‘invitro meat’. It is not imitation meat and is real animal flesh grown by scientists instead of by an animal. It has been described as making protein more animal and environment friendly.

Millions of dollars go to cultured meat research and several labs are working  right now on the new meat production form. It is estimated to be available around 2025 for consumers although Mark Post, Professor of Physiology at the University of Maastricht ate the world’s first laboratory burger before the media in 2013 in London.

At an event attended by 200 journalists and academics the Cultured Beef burger was cooked and tasted live. The burger was made up of around 20,000 muscle strands grown in Mark Post’s laboratory. The burger was made with a little egg powder and breadcrumbs and a few other common burger ingredients. It was tasted by Mark Post.  http://culturedbeef.net/event/

There is increasing interest in cultured meat not only because of the cruelty involved in farming animals in industrial scale intensive factory farms, but also because of the damage to the environment and health risks for both human and animal populations. Many analysts expect meat consumption to rise and it seems unlikely the current strategies for meat production will continue to meet rising demand in meat consumption particularly in developing markets of China and India. The world faces critical food shortages in the near future and some say that cultured meat is the crucial step in finding a sustainable alternative to conventional meat production.

Philip Lymbery  CEO of Compassion In World Farming writes about laboratory meat in his excellent book Farmageddon. The book is a must read for all people who are concerned about animal welfare. 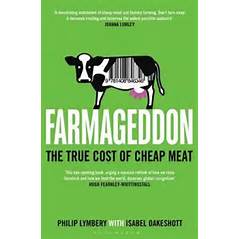 ‘The way meat is produced ‘hasn’t changed much’ over the last hundred years, according to the Microsoft magnate Bill Gates. That could be about to change: in August 2013 the world’s most expensive beefburger was cooked and eaten in London in front of massed ranks of press. The burger, made from in vitro – laboratory-produced – meat, was the work of Professor Mark Post of Maastricht University and cost about £200,000 to develop. It was funded by Google’s co-founder Sergey Brin, and was made of about 3,000 tiny strips of artificial beef grown from the stem cells of a cow. Speaking after the public tasting, Brin was quoted as saying: ‘It’s really just a proof of concept right now, from there I am optimistic we can scale by leaps and bounds.’

Bill Gates believes that innovation in meat production has ‘tremendous market potential’. As it stands, the basic process remains unchanged, of relying on feeding plants to animals that then return a fraction of the calories and protein they consume in the form of meat, milk and eggs. The outlook is for a near-doubling of global demand for meat by 2050, placing a huge strain on the planet’s already overstretched resources. As Gates puts it, meeting that demand isn’t sustainable: ‘There’s no way to produce enough meat for nine billion people’ – the number expected on the planet by mid-century. In an online presentation, Gates describes how food scientists are ‘reinventing’ meat and eggs, creating alternatives that are ‘just as healthful, are produced more sustainably’. It’s not about asking everyone to be vegetarian, he explains, but looking at fresh options for producing ‘planet-friendly’ meat. He sees the future being in the ‘perfect fake’.  He’s in good company. Winston Churchill saw the potential when he said: ‘Fifty years hence, we shall escape the absurdity of growing a whole chicken in order to eat the breast or wing by growing these parts separately under a suitable medium.’

‘I couldn’t tell the difference between Beyond Meat and real chicken,’ says Gates enthusiastically in the presentation. He enlists the help of the best-selling author of The Omnivore’s Dilemma, Michael Pollan, to further explain what they describe as ‘three principal motivators’ that make reducing meat consumption a good idea: health, environment and animal welfare:

Health, because we know high consumption of red meat correlates with higher chances of certain cancers; and the environment, because we know that conventional meat production is one of the biggest drivers of climate change, as well as water and pollution; and ethics, since the animal factories that produce most of our meat and milk are brutal places where animals suffer needlessly.

According to New Harvest, an organisation funding research into in vitro or ‘cultured’ meat in the US and Europe, a single cell could, in theory, produce enough meat to feed the global population for a year. New Harvest’s Jason Matheny told me what it would taste like when it’s fully developed. ‘Well, it should taste the same as conventional meat because it’s made out of the same stuff . . . we think we can match that same taste and texture by producing meat in culture in a way that’s much safer, much more efficient and much healthier for the consumer.’

There is a long way to go before large-scale in vitro meat production is realistic – and a mountain to climb to overcome the ‘yuck’ factor. However, Matheny is confident that it is worth pursuing, not least for the potential health benefits:

In cultured meat, you can precisely control the amount of fat so you can have more of the healthy fats like omega-3 and less of the unhealthy fats. So we can have hamburgers that actually prevent heart attacks rather than cause them. The yuck factor should really be focused on conventional meat and the way it’s produced right now, which is simply unhealthy, unsafe and unsustainable.’

The Future of Meat

Eat less meat, good for the Planet
A new report from the think tank Chatham House, ‘Changing Diets: Pathways to lower meat consumption’ argues that without concerted action to address over consumption of meat, it will be near impossible to prevent global warning from passing the danger level of 2c.

Processed meats – such as bacon, sausages and ham – do cause cancer, according to the World Health Organization (WHO)
‘Global meat consumption has already reached unhealthy levels, and is on the rise. In industrialized countries, the average person is already eating twice as much meat as is deemed healthy by experts. Over consumption is already contributing to the rise of obesity and non-communicable diseases like cancer and type-2 diabetes, and it is a growing problem: global meat consumption is set to rise by over 75 per cent by 2050’. – See more at:

Chatham House states that Governments must lead. They say their research found a general belief across cultures and continents that it is the role of government to spearhead efforts to address unsustainable consumption of meat. Governments overestimate the risk of public backlash and their inaction signals to the public that the issue is unimportant or undeserving of concern.

The issue is complex but the message must be simple. The Public respond best to simple messages. Efforts must be made to develop meaningful, accessible and impactful messaging around the need for dietary change. The overall message remains clear: globally we should eat less meat.